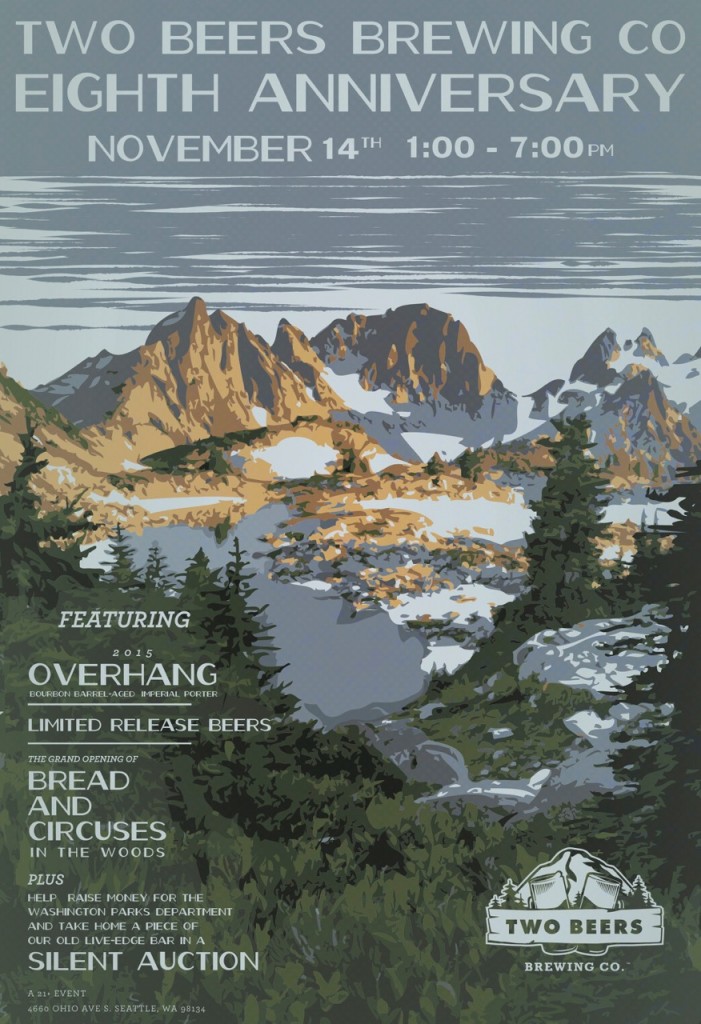 SEATTLE (November 5, 2015) – On Saturday, November 14, join Two Beers Brewing Company at its newly expanded tasting room – The Woods – as it celebrates eight exciting years in business! To mark the occasion, the growing brewery will be showcasing a tap list featuring more than 20 beers, including the release of its 2015 Alta Series Overhang Imperial Porter, offering a 12.4 ABV and 60 IBUs. The day also marks the long awaited grand opening of the tasting room’s new kitchen, run by the crew behind Bread & Circuses food truck, making for an anniversary party not to be missed.

“I say it every year, and every year I mean it – I’m amazed,” said Joel VandenBrink, founder of Two Beers Brewing Company. “We thought things might slow down in our eighth year, but boy, were we wrong. Between the new tasting room, the addition of a kitchen, amazing new beers and ongoing expansion, there’s never a dull moment around here. And that’s the way we like it.”

The grand opening of the kitchen on November 14 marks an exciting partnership between Two Beers Brewing Co and Bread & Circuses. Known for its popular food truck offering up “gastropub eats and upscale carnival treats,” Bread & Circuses’ first brick-and-mortar location will be located in the heart of The Woods tasting room, featuring reimagined versions of bar favorites, plated and shareable items, and a rotating menu changing with the season, led by Chef Robert Killam, formerly of Skillet Ballard. With a limited menu on opening day, guests are encouraged start off with a helping of Duck Fat Popcorn, Brussels Sprout Caesar, or Three Pepper Cider Wings to share. Mix and match, or move on to the main dish, choosing from anyone of the delicious entrees, including Mac and Beer Cheese; Circus Burger featuring bacon, arugula, Three Pepper cider Aioli and fries; Veggie Fried Ravioli; or anyone one of the other mouth-watering options. Finish the night off with something sweet, choosing between Jive Espresso Stout Chocolate Torte, or Sourdough Doughnuts with pear jelly and foie gras mousse. Don’t worry – Bread & Circuses hasn’t forgotten about your furry friends. A special dog-friendly menu will be available, including items such as chicken with rice. For the full opening day menu and details on exciting food items to come, visit www.twobeersbrewery.com/breadandcircuses.

About Two Beers Brewing Co. Two Beers Brewing Co. began operations in a small Seattle basement in 2007 and today, produces fifteen unique beers including eight year-round, seven seasonals and a host of intricate infusions in its 4,800-square-foot SoDo brewery. Two Beers Brewing can be found in Seattle-area bars and restaurants, with tastings kegs and growler fill-ups available at their tasting room located at 4660 Ohio Ave. S. in SoDo, open weekly Tuesday – Thursday from 3-8 pm, Fridays from 3-10pm, Saturdays from 1-10pm and Sundays from 1-6 pm. Select products can also be found in 22-ounce bottles and 12-ounce cans at bars, restaurants and local retailers throughout Washington, Oregon, Alaska and Idaho. For more information, visit www.twobeersbrewery.com.