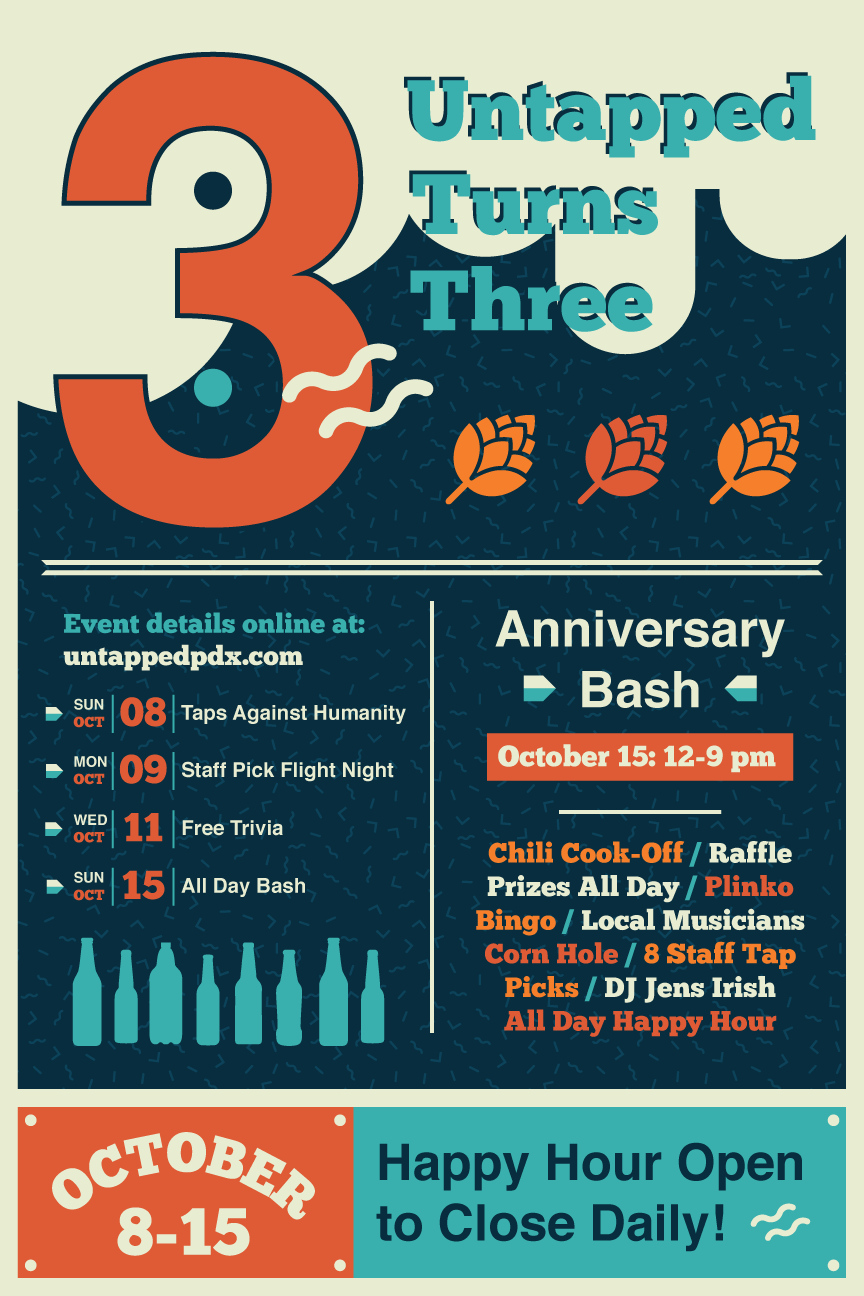 Monday, Oct. 9: Staff Pick Flight Night 3:00 to 11:00 p.m.
During anniversary week the Untapped Staff selects their favorite craft beers to share and compete against each other for who picked the best! This year Untapped will feature eight special “staff pick taps” of craft beer. During Staff Pick Flight Night, Untapped will have discounted flights of four and with each each purchase of a flight you will receive special entries into our large giveaway raffle and our brewery prize raffle happening throughout the day on Sunday, October 15 (no need to be present for the large giveaway, although we would love to see you).

Wednesday, Oct. 11: Free Trivia 7:00 to 9:00 p.m.
An ‘80s & ‘90s edition of Untapped Trivia! Bring your teams to compete; we will be serving up four rounds of trivia (with drink breaks in between) to include two special 1980s and 1990s audio rounds. It’s free to play trivia, prizes for the top 3 teams, raffle prizes throughout the evening with all day happy hour, and staff pick tastings between each trivia round. Trivia starts at 7:00 p.m. and ends at 9:00 p.m.

Sunday, Oct. 15: Anniversary Bash 12:00 to 9:00 p.m.
Untapped will be featuring live music from local Portland musicians, beats by DJ Jens Irish, brewery raffle prizes throughout the day, happy hour from open to close, and their first Fall Harvest Chili Cook Off with up to 15 artisan and secret family recipe chilis. Untapped will also feature eight special “staff pick taps” of craft beer part of their 36 rotating tap lineup to include staff favorites from Great Notion, Lagunitas, Melvin, Breakside, 2 Towns Cider, and others. The hoppy good time does not stop there! As we will also have Corn Hole for your tossing pleasure, Plinko for discounts, and Bingo with cash prizes starting at 7:00 p.m. The daylong celebration kicks-off at 12:00 p.m. and ends at 9:00 p.m.