For the past five years Valhöll Brewing has been brewing craft beer in Poulsbo, Washington. Founded by Head Brewer Jeff Holcomb, Valhöll Brewing took its name from the original Icelandic translation of the resting place for warriors, aka Valhalla. Since this time Valhöll has become a fixture in Historic Downtown Poulsbo.

On Saturday, August 8th Valhöll Brewing will host its 5th Anniversary Party at its brewery in downtown Poulsbo. Join founder and Head Brewer, Jeff Holcomb along with the entire Valhöll team, for a day filled with live music, barbeque, and of course, Valhöll beer. 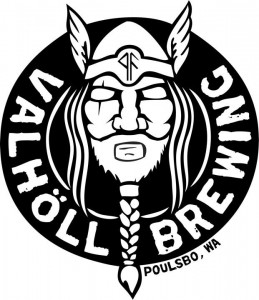 The party begins Noon and will feature an outdoor beer garden and the release of one of the first beers Holcomb ever brewed, Firkenhammer. This Belgian Quad has an ABV of 12.6% and was first inspired by Ted Farmer from Heads Up Brewing Co., formerly of Silverdale, WA.

Then two hours after the doors open to musical guests will take the stage at 2:00pm. Punk legend Mike Hererra along with Branden Daniel & The Chics will take the stage for a special performance.
Commenting on Valhöll’s success, Holcomb said, “The community’s support has been overwhelming.  We make beer we like to drink and because of it, we’ve made friends for life.”