The cooler weather is now fully upon us and that means it’s a great start to indoor drinking season. This weekend is no exception with some fabulous events, including the grand opening of Grand Fir Brewing in Southeast Portland.

Tap takeovers are returning and one is arriving in a huge way. pFriem Family Brewers will be taking over 45 tap handles for the next few weeks at Loyal Legion in Portland and Beaverton. Nebulous Taproom will be hosting World Cup viewing with pFriem and prior to that, it’ll host Fremont Brewing for a mini-tap takeover. Alesong Brewing will have all five of its fall releases on tap at The BeerMongers. This will be a perfect time to check out the new location!

If you feel like venturing outdoors on Friday and Saturday evening, the Oregon Zoo will host BrewLights. Learn more about these events and more from our listing below! 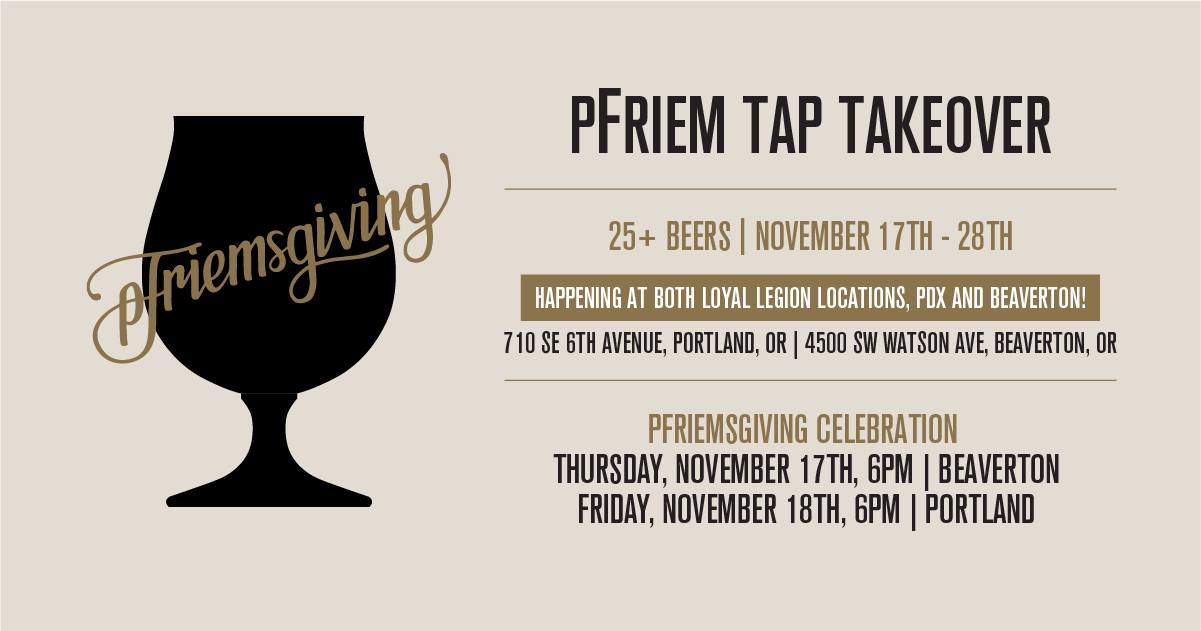 pFriemsgiving – Loyal Legion Beer Hall
Thursday, November 17 – Monday, November 28
The largest tap takeover of the year begins today at Loyal Legion when pFriem Family Brewers commandeers over 45 tap handles to showcase their beer from Hood River, Oregon. This is a perfect time to get ready for Thanksgiving. Plus, we’re told that there will be specials on pFriem beers during the duration of this massive tap takeover! 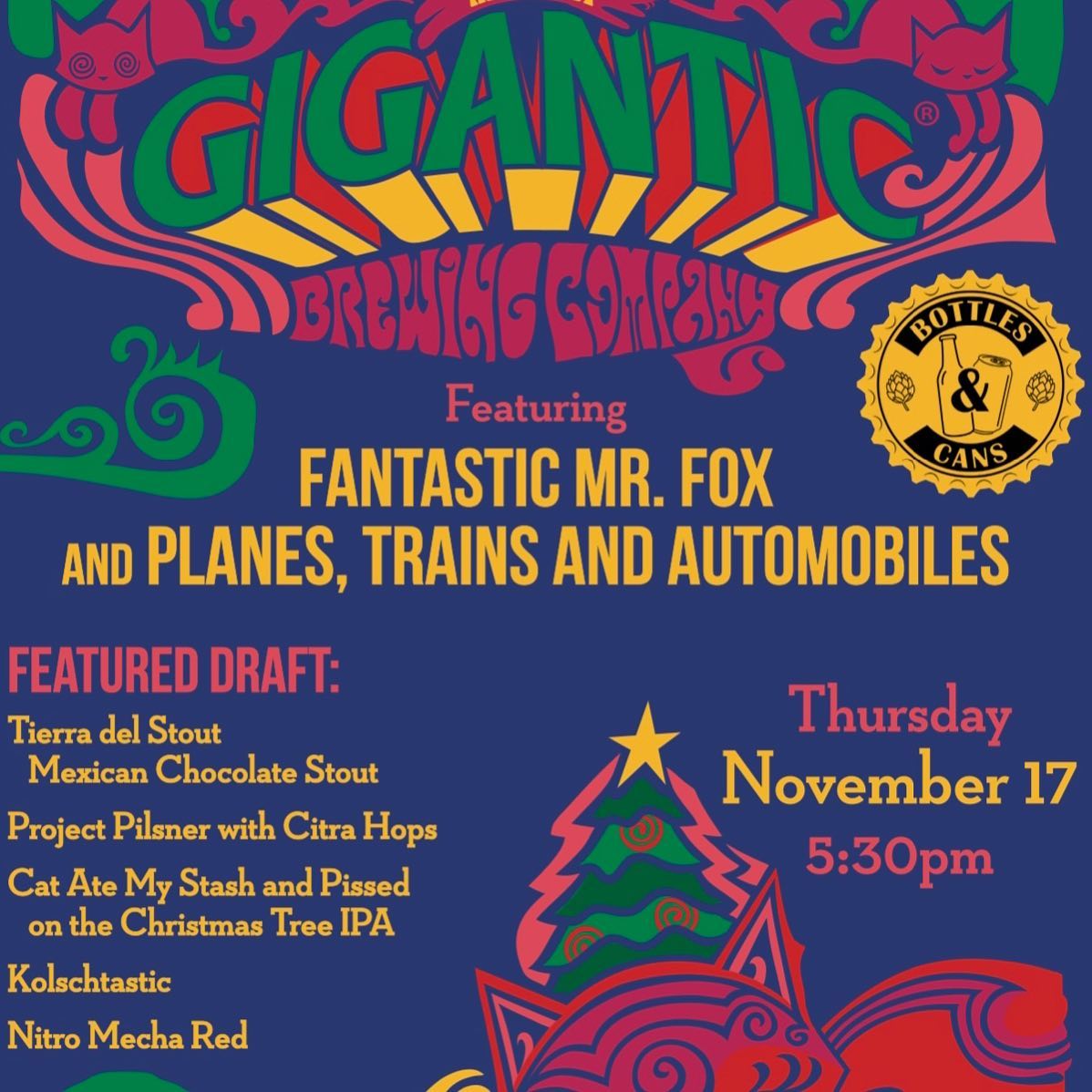 There will be four Gigantic beers on tap with a raffle in between both films at 7:00pm.

Alesong Brewing Fall Beer Release
Friday, November 18 – Noon-Close
All five recently released offerings from Alesong Brewing & Blending will be hitting the taps at The BeerMongers. This will be a great time to check out the new space as Touch of Brett. Rhino Suit, Señor Rhino, Cellar Season and Whiskers on Kittens will be on tap.

If you want to get a head start on these beers, both Matt Van Wyk and Doug Coombs from Alesong will be hanging out at The BeerMongers tonight from 4:00-7:00pm. 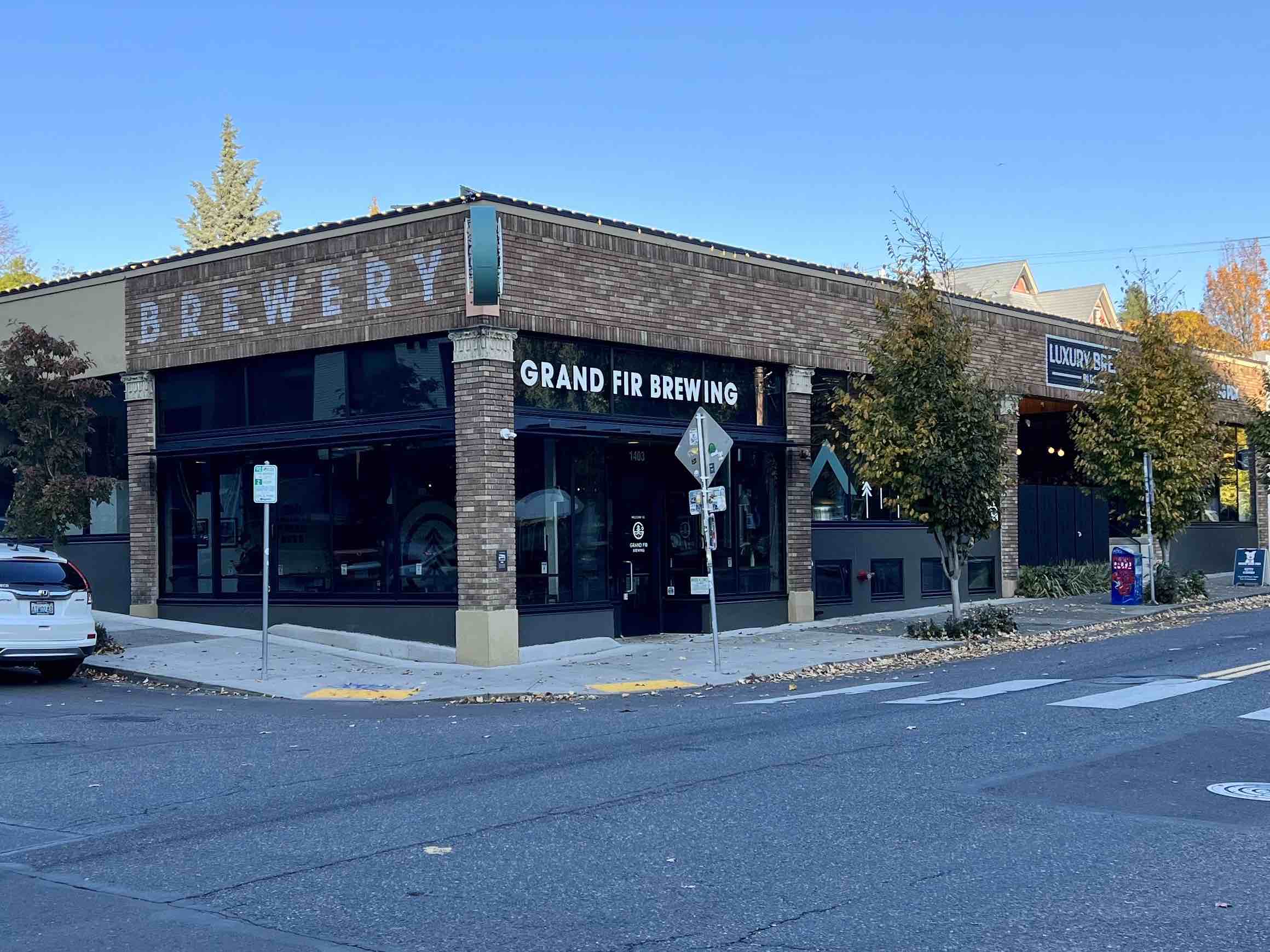 Grand Fir Brewing Grand Opening
Friday, November 18 – Noon-11:00pm
Grand Fir Brewing, Portland’s latest brewery officially opens its doors on Friday. The power couple of Whitney Burnside and Doug Adams have taken over the space that was once home to West Coast Grocery. This new brewery a hit with both beer and dining fans.

On the brewing side Whitney has six beers ready to be served, four brewed onsite and two collaborations, one with Living Haüs and Obelisk and the other with 10 Barrel. We recommend the Tack Shack East Texas Lager, Old Growth Pale and Heartwood Stout all brewed onsite.

In the kitchen Doug will bring in foodies with his signature fried chicken that dates back to his days at Imperial. He also has a burger on the menu that was inspired by his East Texas roots from his visits to Whataburger. 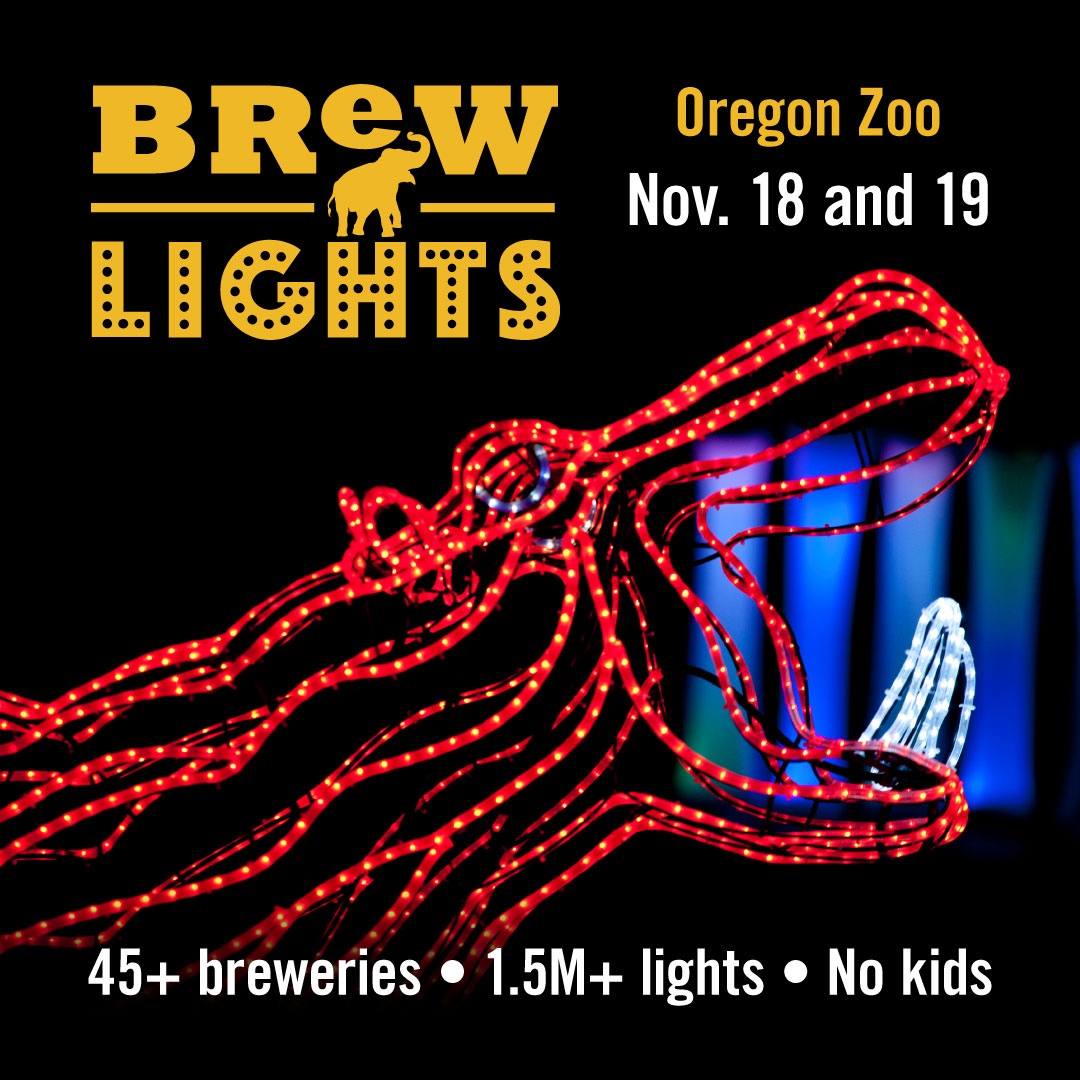 Oregon Zoo BrewLights
Friday, November 18 – Saturday, November 19 – 4:00-10:00pm
BrewLights, the adult only version of ZooLights returns this weekend to the Oregon Zoo for those 21 years of age or older.

More than 45 Northwest breweries and cideries, featuring local food carts, live music, dancing and more. Tastings offered throughout the zoo, with guests choosing from 100 beer, seltzer and cider options while strolling through colorfully lit trees and 3-D light sculptures. For grown-ups interested in the lights without the beer sampling, a nondrinker ticket will be available as well. To purchase tickets click here. 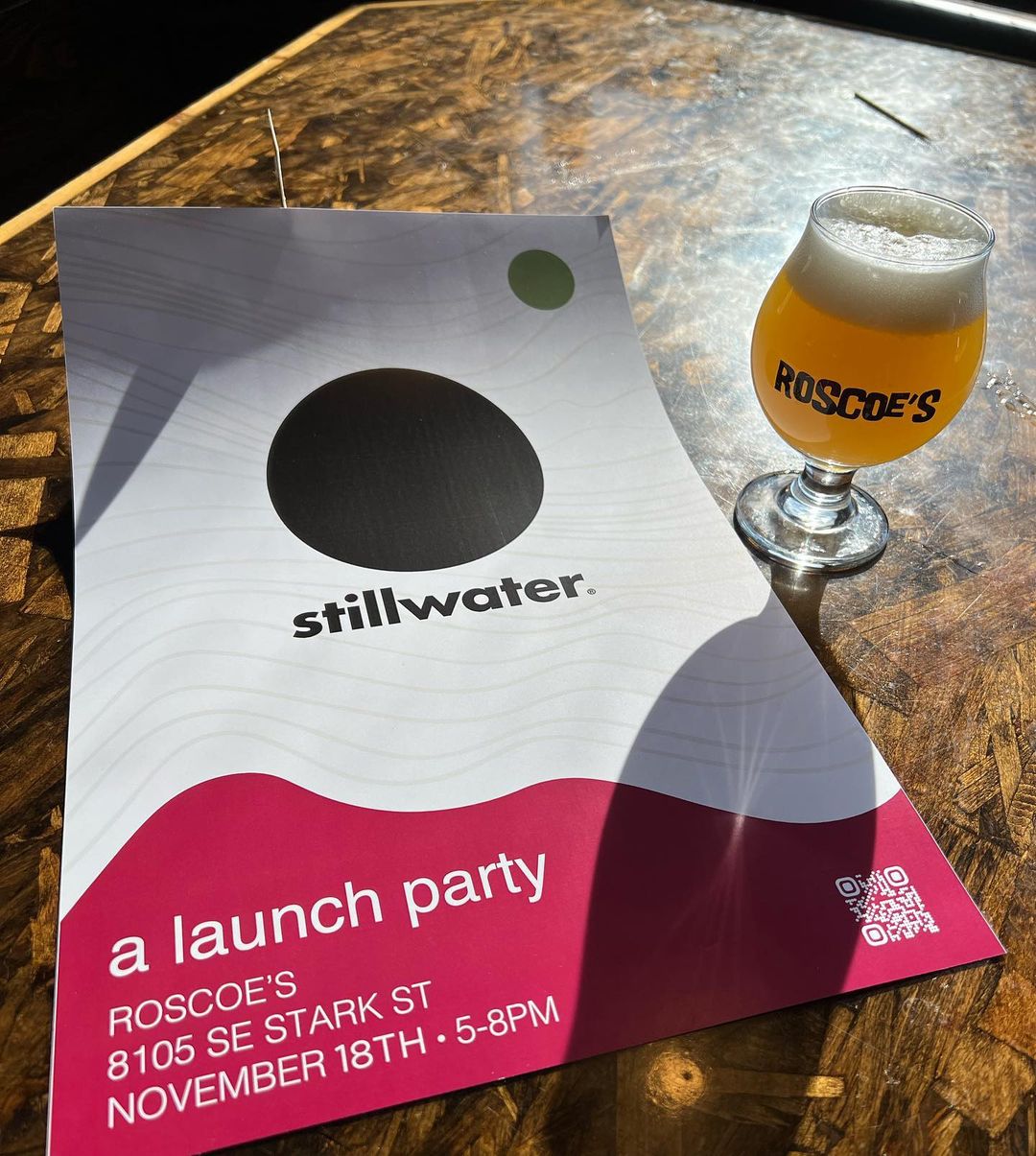 Stilwater Portland Re-Launch Party
Friday, November 18 – 5:00-8:00pm
Stillwater has re-launched its brand in the U.S. as it is now being brewed about 90 minutes north of Portland at Talking Cedar Brewing in Grand Mound, Washington. Look for a handful of Stillwater offerings on tap during this event at Roscoe’s in Southeast Portland. 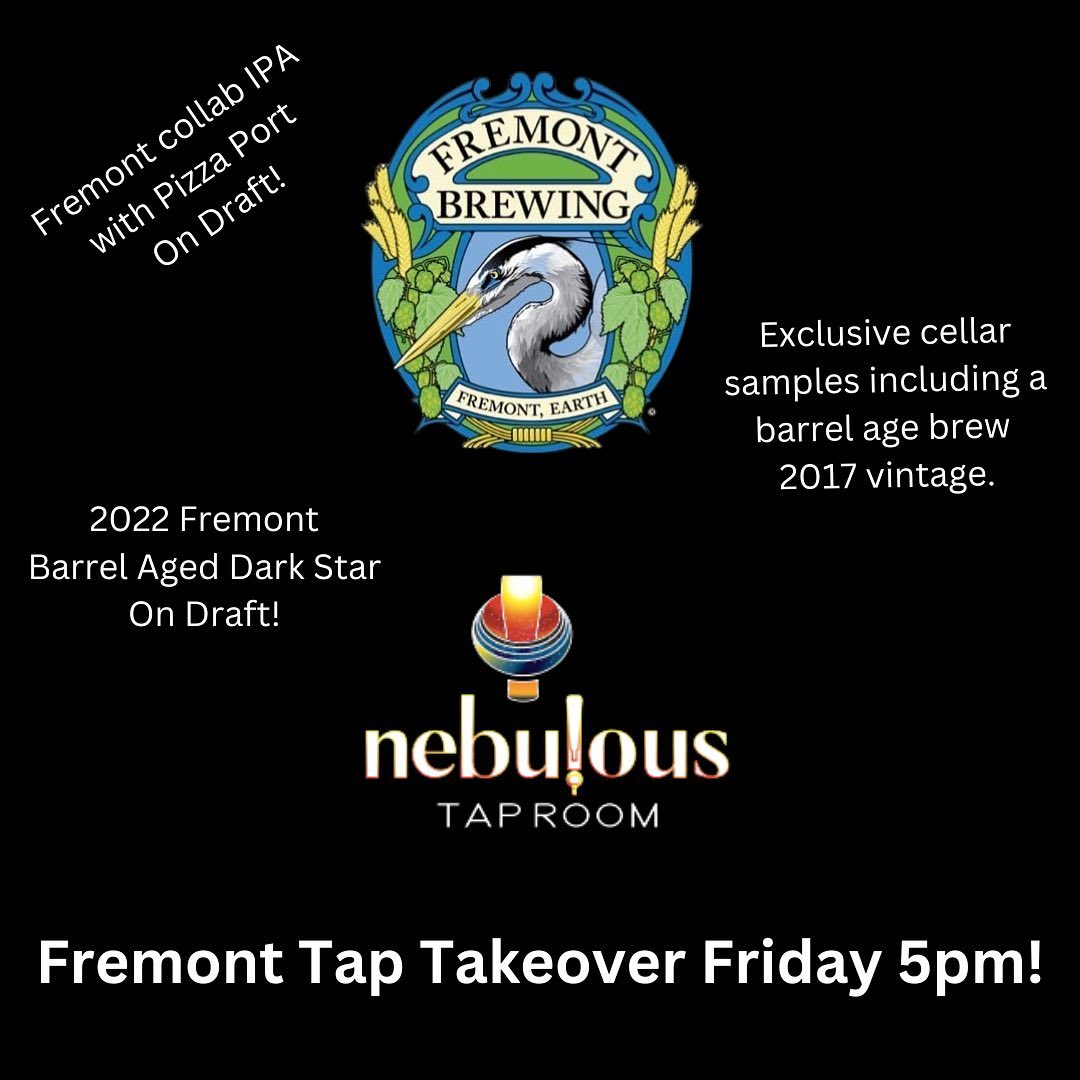 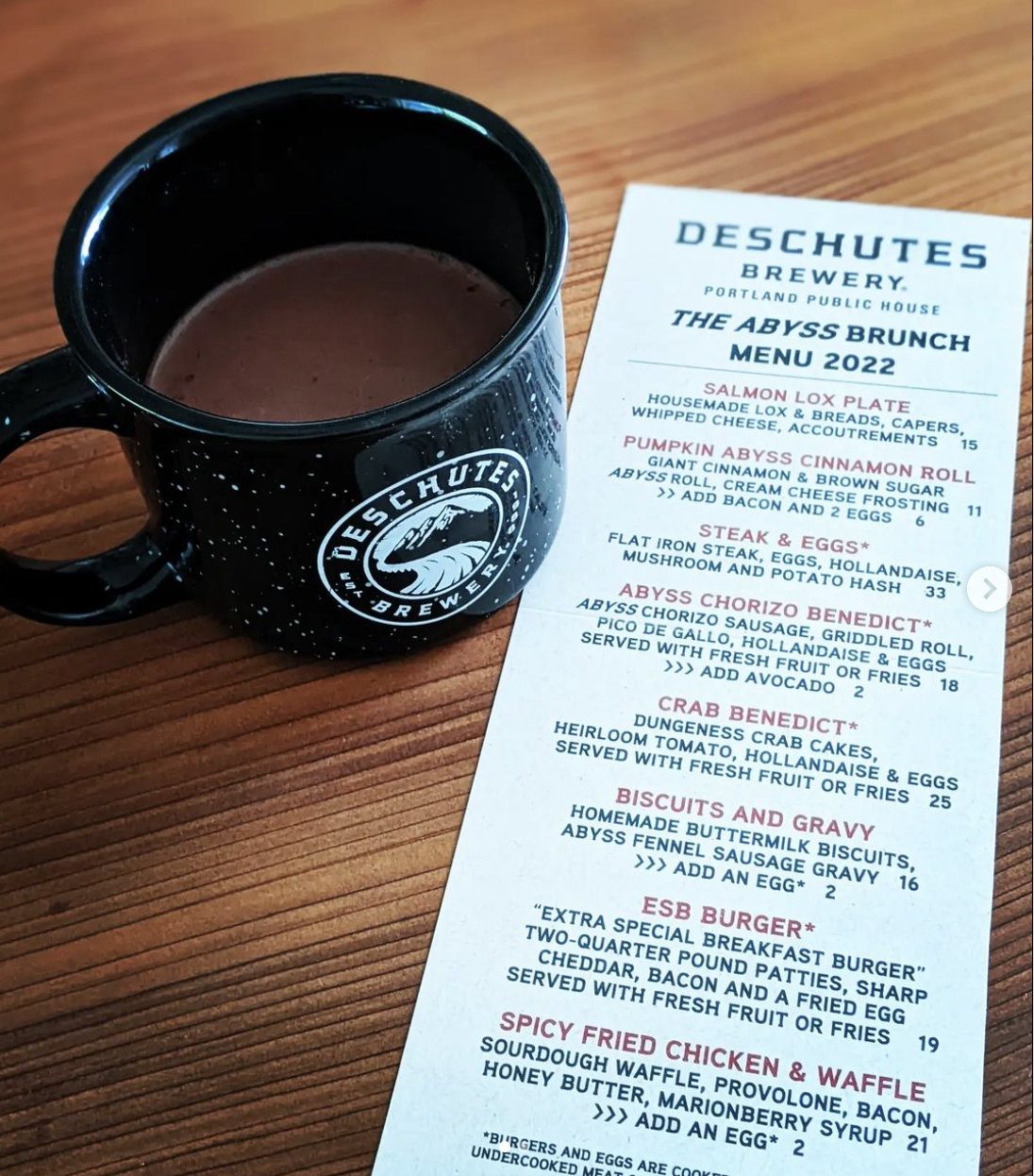 Once the brunch ends, there will be The Abyss specials all evening long!

It also happens to be the 37th Birthday of the classic Terminator Stout. Therefore you may also want to grab a glass of the Stout or its bolder Barrel-Aged Terminator that was aged in Hogshead Whiskey barrels.

The rest of the McMenamins empire will offer some enticing deals on Terminator Stout as well. Look for pints for only $5.25, Terminator Stout Ice Cream Float for $5.50 or a Terminator French Onion Burger with fries or tots for $16.50. 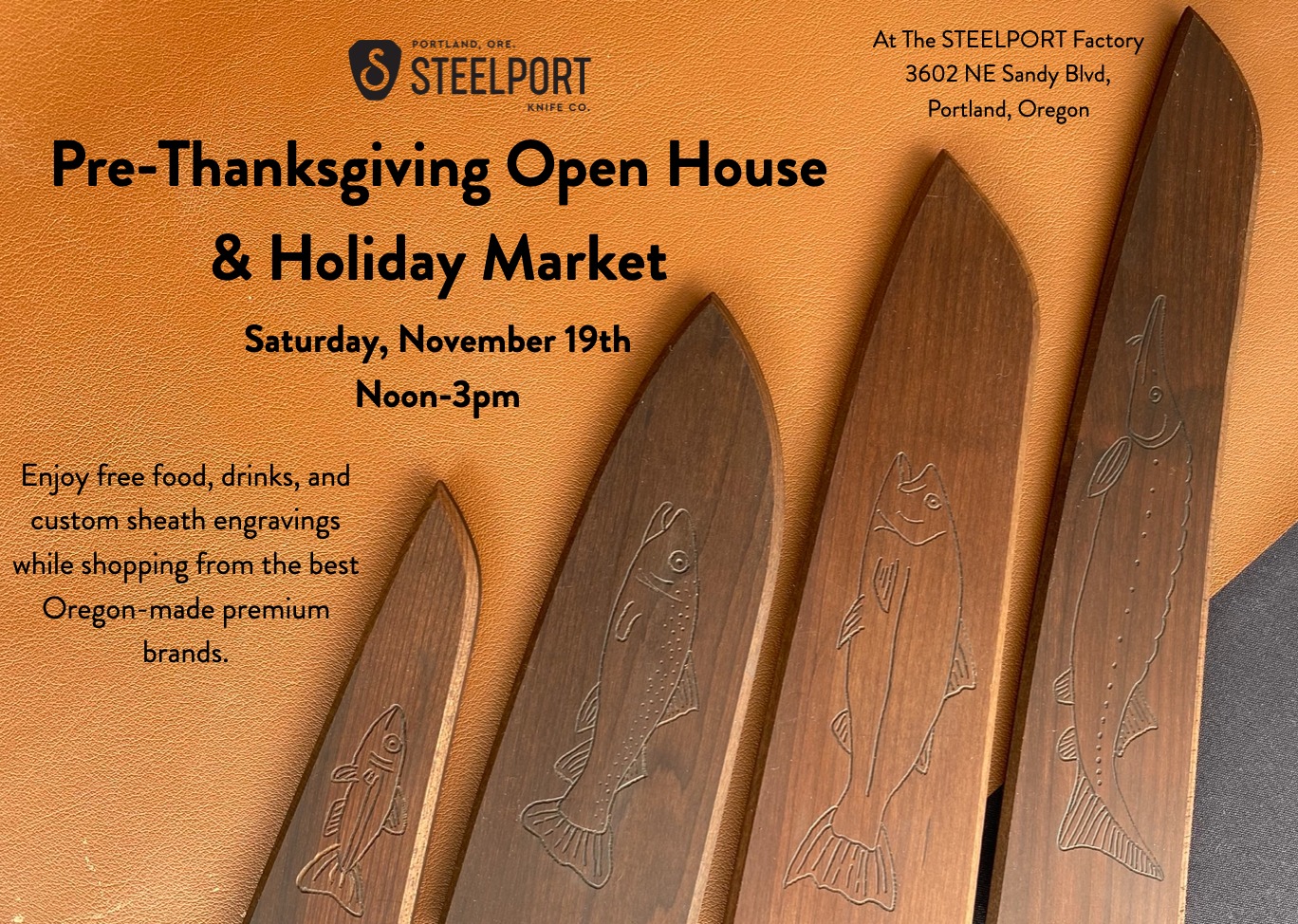 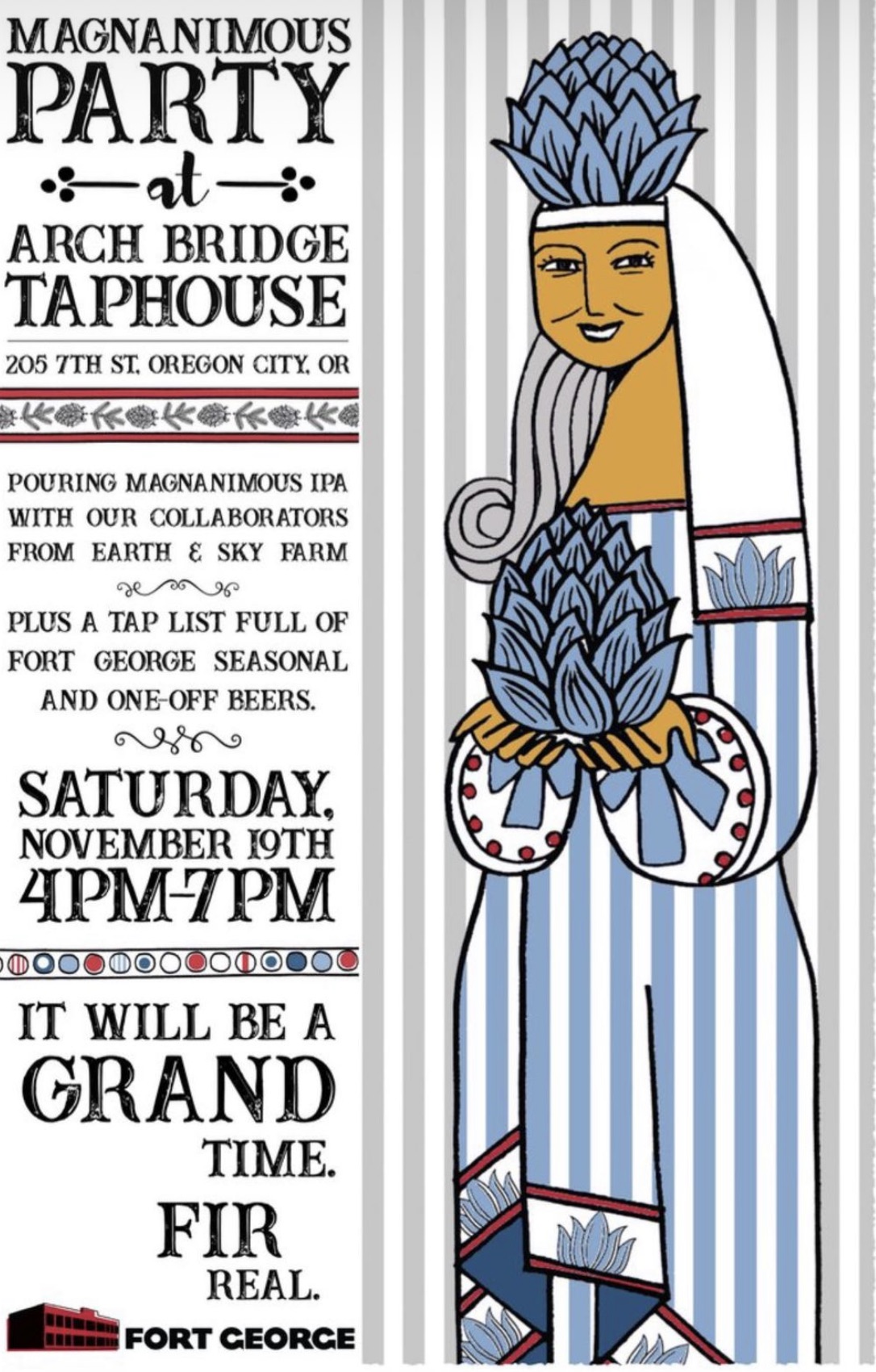 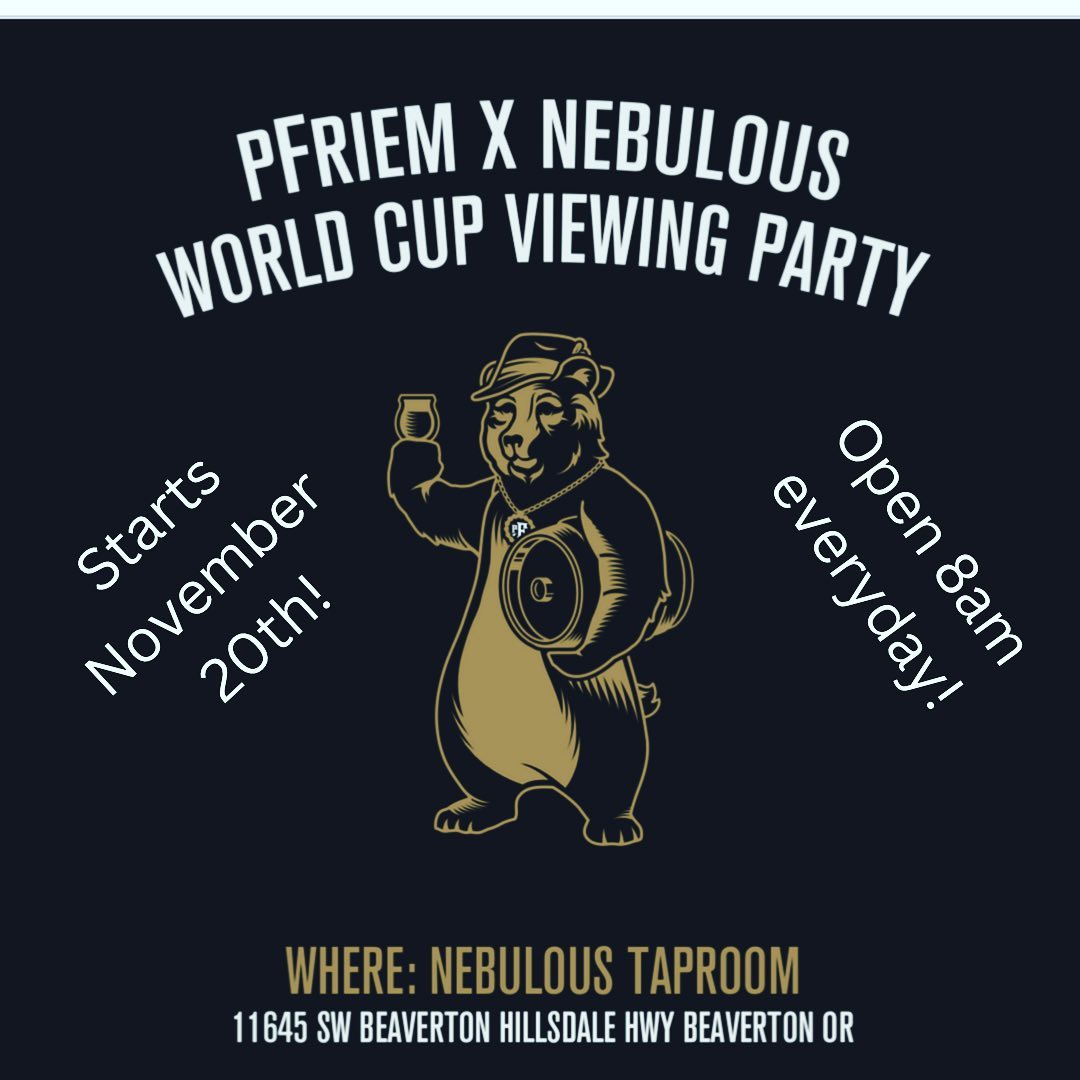 pFriem X Nebulous World Cup Viewing Party
Sunday, November 20 – Sunday, December 18 – 8:00am-Close
The World Cup returns on Sunday and Nebulouse Taproom will be hosting pFriem Family Brewers for the month-long event. Nebulous Taproom will begin the World Cup with eight pFriem beers on tap, including $4 13oz pours pFriem Pilsner! Plus, giveaways during all US matches! The first USA match is on Monday at 11:00am.