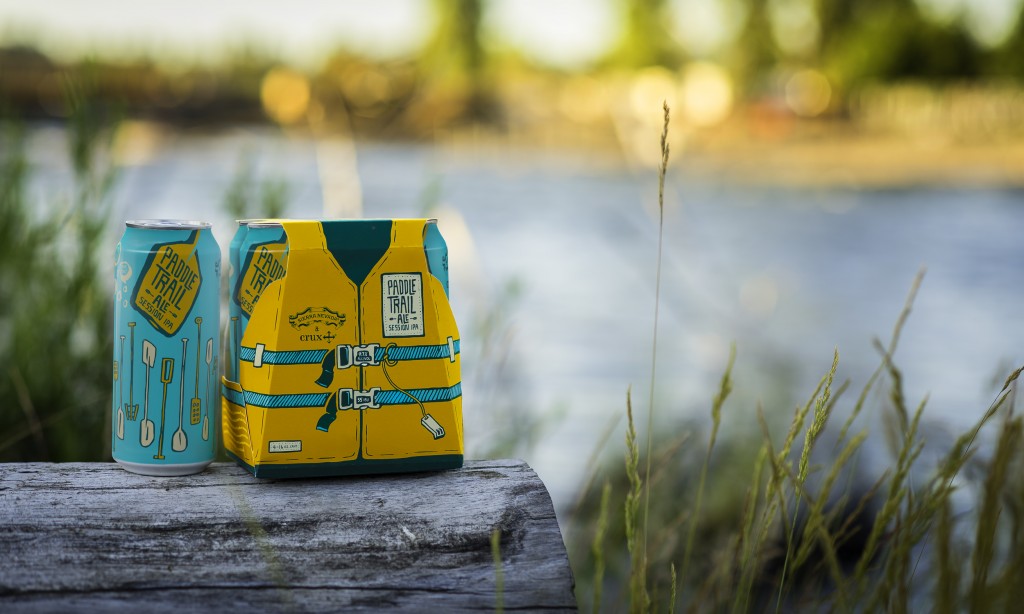 (Bend, OR.) Brewing industry veterans Larry Sidor of Crux Fermentation Project and Ken Grossman of Sierra Nevada Brewing Company have been talking for years about getting together to collaborate on a great beer.

They knew the time was right when they learned of a project involving the outdoors and the people who love it—two things that both breweries hold dear. When they shared the idea with Columbia Distributing, who distributes for both breweries and is also committed to the communities they serve, they were excited to join in.

THE PROJECT:
The Bend Whitewater Park in Bend, Oregon, will remove an old mill pond dam on the Deschutes River to create three channels downstream: a safe channel for paddle boarders and other floaters, a natural river area to enhance habitat, and a whitewater play area, the first of its kind on the west coast.

Voters in Bend approved a bond measure to fund the majority of the project through the Bend Park and Recreation District. The balance of funds came from the Bend Paddle Trail Alliance (BPTA), an organization committed to enhancing river health, beauty, safety and recreation.

The BPTA, an all-volunteer 501(c)(3) non-profit, has already contributed $1.3 million to the project. They raised most of that money through private donations, grants and ongoing fundraising events, but had to take out a bridge loan to pay for the remaining portion of their commitment.

To help the BPTA repay their loan, Crux Fermentation Project, Sierra Nevada Brewing Company, and Columbia Distributing will donate $2 for every four-pack of Paddle Trail Ale, a collaboration beer; they expect to net over $30,000 for the cause, covering a significant portion of the BPTA loan.

“The Whitewater Park is a dream come true for many of us,” says Jayson Bowerman, avid paddler and Bend Paddle Trail Alliance board member. “After many years of hard work by many community members, it’s really happening. We’re especially moved by the efforts of Crux, Sierra Nevada and Columbia Distributing to help push us across the finish line of our fundraising efforts.”

THE BEER:
Paddle Trail Ale is a session IPA, brewed with experimental whole-flower hops for bright citrusy notes—inspired by summer days playing on the river. Paddle Trail Ale will be distributed in Oregon in four-packs of 16-ounce cans. (Crux plans to also offer the beer on draft at their Tasting Room in Bend.) This limited-release beer is being brewed exclusively for this cause, and only for this summer.

DATES TO NOTE:
Week of August 24: Paddle Trail Ale will be released throughout Oregon.

THE COLLABORATORS:
Paddle Trail Ale will be collaboratively brewed and canned at Sierra Nevada in Chico, California. Larry Sidor, co-founder and brewmaster of Crux Fermentation Project, is honored to brew alongside his old friends at Sierra Nevada.

“We’re excited to work with Sierra Nevada, which is brewer-owned and -operated and shares our values,” says Larry. “In fact, the only thing better than Sierra Nevada’s brewing equipment is Sierra Nevada’s people. I just can’t wait to brew with them.”

Crux is also excited for the opportunity to get their beer into cans (a first for Crux), thanks to Sierra Nevada’s state of the art canning line in Chico. Crux and Sierra Nevada agree that cans are a natural fit for a beer celebrating summer recreation and refreshment.

Sierra Nevada was also eager to work with Crux because of their shared values. Both breweries believe in the companionship and camaraderie among brewers and in giving back to the communities they serve.

“When Larry and the team at Crux asked if we wanted to brew a beer together that would benefit a river project, we jumped at the chance,” says Ken Grossman, founder, president and CEO of Sierra Nevada Brewing Company. He adds, “I’ve known Larry for more than twenty years and he’s one of the great guys in craft brewing.”

Columbia Distributing provides distribution for Crux Fermentation Project and Sierra Nevada throughout Oregon and Washington. In addition to delivering great beer in the northwest, Columbia is always looking for ways to give back to the community.

“The chance to collaborate with these two extraordinary brewers, deliver Paddle Trail Ale to our customers and deliver a meaningful contribution to our community is fantastic,” said Mark Walen, President of Columbia Distributing Oregon. “Columbia is committed to this cause and supporting Bend’s efforts to improve access to the terrific natural resources in the community for residents and visitors alike.”

Upon project completion, Bend Parks & Recreation District will maintain the park. Community Relations Manager Jan Taylor wishes to remind the public to drink responsibly and also that alcohol is only allowed in parks with an alcohol-consumption permit by the District.

For more information about the project, the beer and the collaborators, please visit PaddleTrailAle.com.

About Crux Fermentation Project:
Crux Fermentation Project is located at the epicenter of Bend and at the crucial core of the brewing process. We’ve designed our 11,000-hectolitre brewery to allow for non-traditional brewing methods like decoction mashing, open fermentation, oak barrel aging, wild yeast strains and experimental hops. All our beer is bottled and labeled by hand in small batches right at the brewery. Brewmaster Larry Sidor is always in pursuit of the next great beer, whether by reinterpreting a classic style or abandoning it altogether. More at cruxfermentation.com

About Columbia Distributing:
Columbia Distributing is one of the nation’s finest beer, cider and non-alcoholic beverage distributors. Headquartered in Portland, Oregon, the company has been delivering the best-known brands in the beverage business since 1935. Today Columbia Distributing and its 2,500+ employees service over 20,000 retail customers covering more than 135,000 square miles in Oregon and Washington. The company’s success is based on the deep-rooted tradition of delivering quality products, timely service and a genuine concern for customers’ needs. More at coldist.com.

About the Bend Paddle Trail Alliance:
The Bend Paddle Trail Alliance (BPTA) is an all-volunteer 501(c)(3) nonprofit organization devoted to the creation, connection and public enjoyment of the 100+ mile long Deschutes Paddle Trail in Central Oregon. Their mission is to enhance river and lake recreation and appreciation for a wide variety of recreational water enthusiasts while promoting safety, education, and stewardship. The objective of the Bend Whitewater Park project is to reconnect the Deschutes River and enhance river health, beauty, safety and recreation.
More at bendpaddletrailalliance.org