18 May 2015 – Portland, Oregon – Salmon-Safe, a non-profit organization that is dedicated to restoring Pacific Northwest salmon watersheds, today announced receiving a $16,600 donation from the Deschutes Brewery and Columbia Distributing Beer Machines Party held in Portland last month. The party, which was held during the annual Craft Brewers Conference, featured steam-punk style beer machines built by local artists. The donation was comprised of artist sales of the beer machines, with a matching donation from Deschutes Brewery.

“For us as brewers, we’ve been long-time supporters of Salmon-Safe and their work with hop growers to increase environmental sustainability,” said Angela Jasus, field marketing manager at Deschutes Brewery. “Partnering with them for a fantastic event like this one was a perfect fit and we were happy to be able to further support the important conservation work that they are doing.”

Deschutes Brewery was the first brewer to source Salmon-Safe certified hops and continues to be a national champion of environmentally certified hops, as well as many other environmental causes. The money raised from the Beer Machines event will be devoted to transitioning more Willamette Valley and Yakima hop growers to salmon-safe practices that protect water quality and wildlife habitat. This is important work for Salmon-Safe because 90 percent of U.S. hops are sourced from two northwest salmon watersheds. 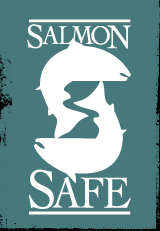 Dan Kent, co-founder and executive director for Salmon Safe, said, “The opportunity to join with Deschutes for Beer Machines was about elevating the visibility of environmentally certified Willamette Valley and Yakima hops to a national audience of craft brewers. And it was an epic party too.”

About Salmon Safe
Founded by Pacific Rivers Council, Salmon-Safe is now an independent 501(c)3 nonprofit based in Portland Oregon. The organization’s mission is to transform land management practices so Pacific salmon can thrive in West Coast watersheds. More than a decade after first certifying farms in Oregon’s Willamette Valley, Salmon-Safe has become one of the nation’s leading regional eco labels with more than 60,000 acres of farm and urban lands certified in Oregon, Washington, California, and British Columbia. The Salmon-Safe retail campaign has been featured in 300 supermarkets and natural food stores, delivering important marketplace benefits to participating landowners. www.salmonsafe.org

About Deschutes Brewery
Named as OUTSIDE’s Best Places to Work in both 2013 and 2014, Deschutes Brewery was founded in 1988 as a brew pub in Bend, Oregon. Still family and employee owned 27 years later, the brewery is known for brewing a diverse line-up of award winning beers including the popular Black Butte Porter and Mirror Pond Pale Ale. From the beginning, the focus has been on crafting the best beer and food using only the finest ingredients.  In 2008, the brewery opened a second pub in Portland’s Pearl District. Deschutes Brewery now ships beer to 28 states, the District of Columbia, and around the world from its main brewing facility located on the banks of the Deschutes River.  To find out more, visit www.DeschutesBrewery.com or follow on Facebook (/Deschutes.Brewery) and Twitter (@DeschutesBeer).