Nearly 25 years ago the idea of opening a microbrewery in Missoula, Montana began to take shape. It was back in late 1992 that three friends Bjorn Nabozney, Neal Leathers, and Brad Robinson met while working at a Missoula ski shop and discussed their vision of opening a brewery.

A year later Nabozney began working on a business plan while in business school at University of Montana. Then nearly two years later with the assistance of Leathers, Robinson along with a few members of their family and friends, Big Sky Brewing began operations.

Since the brewery’s inception in 1995, Big Sky Brewing has brewed 200 million beers to become Montana’s largest brewer. Its beers are distributed in 24 states and have been awarded medals throughout its history.

Big Sky Brewing has also been charitable to the people of Montana as it has given over $500,000 to charities and communities in Big Sky Country. In its latest endeavor, Big Sky Brewing has partnered with the University of Montana on GRIZ Montana Lager to honor the univeristy’s 125 years of education. A portion of the sales of GRIZ Montana Lager that is an officially licensed University of Montana product will benefit University student-focused wellness and transportation programs as well as other community outreach efforts.

We recently had the opportunity to interview Big Sky Brewing co-founder Bjorn Nabozney. Here’s what he had to say.

What made you decide to open a brewery back in 1995?
Bjorn: We actually started working on the idea in late 1992 however between the three of us we didn’t have two dimes to rub together. Not having any money ourselves it took us a while to find investors that were will to undertake such a risky adventure!

How did you hook up with the two other co-founders, Neal Leathers and Brad Robinson, to start Big Sky Brewing?
Bjorn: We all worked together in a ski shop. Later as the business was coming together my brother Kris and Brad’s father Russ came on board to help through the final push to get the brewery up and running.

This era was sort of the beginning of what is now known as the craft beer movement. Which “microbrewed” beers were you drinking in the early 1990s?
Bjorn: Red Hook, Deschutes, Sierra Nevada and Bayern were some of my go to beers.

When Big Sky Brewing released its first beers how were the beers received in the community?
Bjorn: Our start was amazing! Working closely with our distributor we launched with 65 bars. Our very first bar was The Rhino.  While our very first beer “Whistle Pig Red” wasn’t what we would consider a market success we quickly followed it up in a week or so with our flagship Moose Drool Brown Ale.

From my understanding you began bottling a few years after you opened in Missoula on a contract basis with Portland Brewing Company. How did that relationship with Portland Brewing come about?
Bjorn: We knew Fred Bowman and they had some excess capacity. We were in the middle of trying to expand our operation but were having problems putting the financing together because the craft industry had just experienced its first crash. We worked out what’s called an alternating proprietorship and brewed our bottled beer in Portland while we were putting together our new facility in Missoula. All of our draft beer was still produced in Missoula during this period.

Since this time of contract brewing Big Sky opened a larger brewing facility. Are there any plans for any future expansion at the brewery in the near future?
Bjorn: We are always up to something with regards to our facility. Our focus has always been on operating more efficiently and steadily improving the quality of every aspect of our business. While it’s not something we generally talk about for the last 22 years we have been consistently improving our equipment and processes, because quality doesn’t happen by accident. 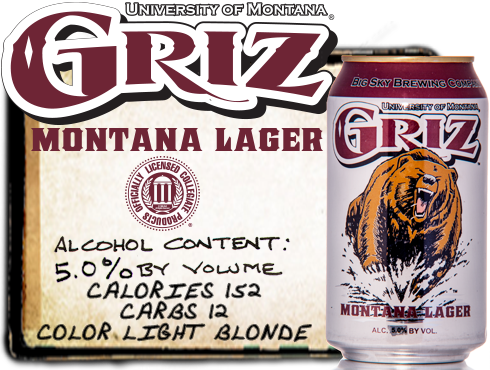 So Big Sky just released a beer, GRIZ Montana Lager that honors the 125th Anniversary of the University of Montana. How did this officially licensed UofM beer come about? Were there challenges working with an institute of higher education when alcohol product is involved?
Bjorn: Doing this was a bit tricky given the sensitive nature of alcohol and universities, but the idea was hatched up while discussing ways we could participate in helping to commemorate a significant occasion for higher education in Montana. While it presented some risk of backlash we are very proud to be producing an adult beverage for legal aged adults. We’re offering a great beer that the alma mater and community can enjoy while we celebrate the success of 125 years of higher education in Montana which also includes a very generous royalty paid to the university on the sales of beer and merchandise.

It was also proved difficult to incorporate art design that kept this aligned with the Big Sky family of beers while simultaneously incorporating University of Montana elements of design. Overall this has been very fun and challenging beer to make a reality!

How long will this beer be available for?
Bjorn: We anticipate it will be around through most of 2018.