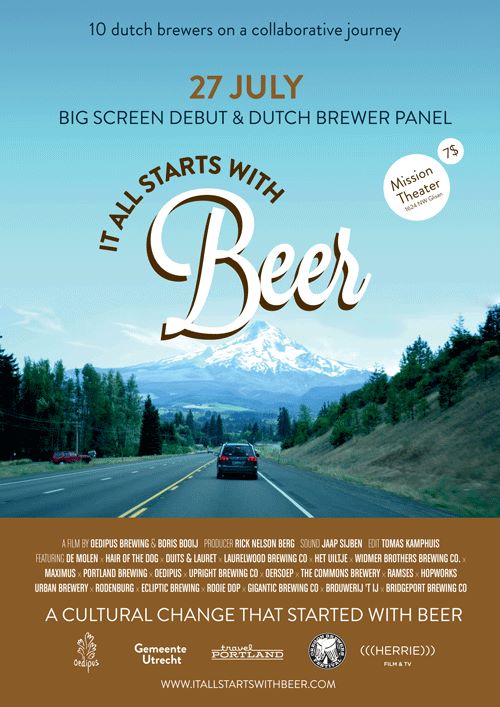 PORTLAND, Ore. — ­­As part of Oregon Craft Beer Month and in conjunction with the Oregon Brewers Festival, the Mission Theater will present the documentary It All Starts With Beer on July 27 at 7pm. Doors open at 6:30pm. The theater is located at 1624 NW Glisan. Tickets cost $7 and are available in advance at McMenamins.com. The event is a fundraiser for the Portland Utrecht Network.

The movie, a joint project between Rick Nelson with Oedipus Brewing and film director Boris Booij, showcases the journey of a dozen craft brewers from The Netherlands to the Oregon Brewers Festival in 2014. In addition to following the expedition, the documentary shows how and why Portland catapulted ahead in the microbrew revolution, comparing it with The Netherlands and its uprising of craft beer making, which is currently seeing a craft beer explosion like the one that swept Portland twenty years ago.

The movie will be followed by a panel discussion with Art Larrance, founder of the Oregon Brewers Festival, and several of the Dutch brewers featured in the movie, including Nelson, Sander Kobes from Oersoep and Mark Strooker from Rooie Dop. The panel will explore how each country’s beers have inspired each other and a little about the history of both beer cultures. The panel will also explore how the young Dutch industry compares to Portland’s earlier days of brewing. Greg Raisman with the Portland Utrecht Network will moderate the panel.

“Many Portland brewers have been inspired by the long tradition of beer brewing in Europe,” explained Raisman. “We have Belgian beer fests, sour beers, farmhouse style beers, lagers, pilsners and radlers because of European traditions. In The Netherlands, brewers got the taste of IPAs on visits to the Northwest and are now brewing with Cascade and Chinook hops.”

The 28th annual Oregon Brewers Festival, which will take place July 22 through 26 at Tom McCall Waterfront Park, is continuing its newest tradition of showcasing international brewers at the event. The International Beer Garden is the brainchild of Larrance, who is keen to develop long-term cultural exchanges with brewers around the world. Through the festival, our local beer community can share its passion, knowledge and friendship with other burgeoning craft beer movements in a collective celebration.

“The beer collaboration has been real between our communities,” stated Larrance. “We’ve learned from each other and our breweries have made beers together.”