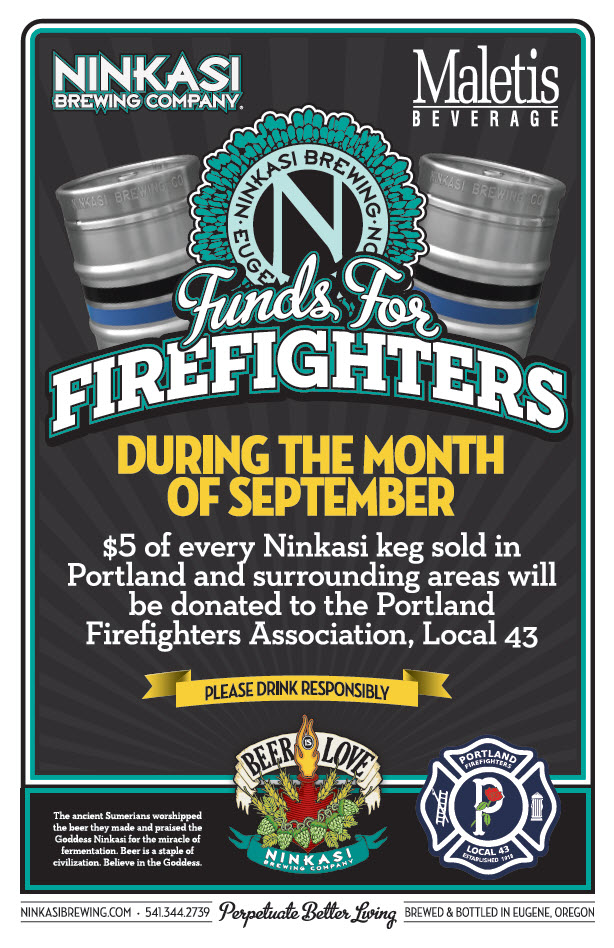 EUGENE, Ore.—Aug. 25, 2015—Ninkasi Brewing Company has teamed up with Portland-area wholesale partner, Maletis Beverage to offer a month-long give-back program in support of Portland Firefighters’ Association, Local 43, called “Funds for Firefighters.” For every Ninkasi keg sold in Portland and surrounding areas during the month of September, five dollars will be donated to support the work that Local 43 does to serve its community.

“It is an honor to be given the chance to partner with the Local 43 and to bring community together in support of the men and women who watch over us,” says Ryan Brentley, Ninkasi Portland Market Manager.

“We are thrilled to be working with two great companies,” says Alan Ferschweiler, President of Portland Firefighters Association, Local 43. “The donations will go directly into our charitable fund which helps us to comfort families of fallen firefighters, provide children in need with warm winter coats and help our members actively participate in our communities we serve when a need arises.”

“Maletis Beverage is privileged to champion Ninkasi’s efforts in supporting Local 43; we are very proud to assist in the initiative,” adds Tim Kennedy, VP of Craft/Import and Wines Sales for Maletis Beverage.

To participate in the program, beer drinkers are encouraged to order Ninkasi on-tap during the month of September throughout the greater Portland area. Locations that serve Ninkasi can be found by visiting: http://www.ninkasibrewing.com/delicious/beer-finder.html.