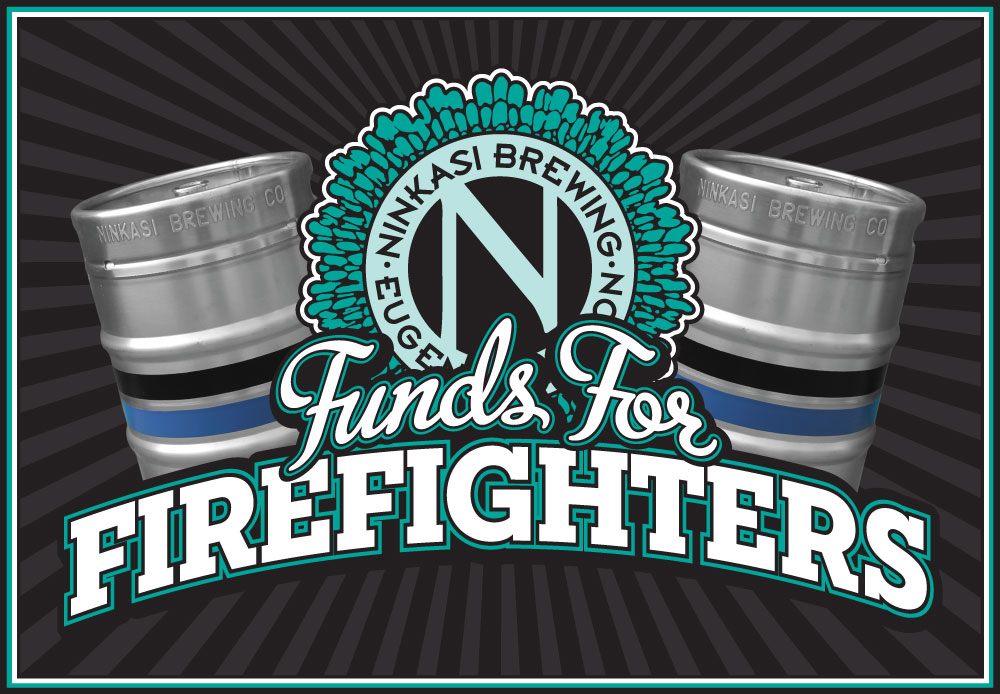 During the Month of April, $20 of Every Ninkasi and Nectar Creek Keg Sold in Corvallis and Philomath Supports the Philomath Professional Firefighters IAFF 4925

“We are a small department and don’t have a lot of avenues to raise funds this way,” explains Cpt Rich Saalsaa, Philomath Professional Firefighters president. “The amount raised from this program will make a big difference to the kids in our community, as well as provide emergency funds for people who are displaced due to an accident and need a hand; every dollar donated to our fund will be put directly into the community.”

“We are very excited to partner once again with Nectar Creek, and Bigfoot Beverages to show our support for the Philomath community,” says Ryan Deiro, regional manager for Ninkasi. “Fund for Firefighters is an easy way to give back to the people who keep our communities safe.”

“We’re excited to partner with Ninkasi and Bigfoot to support the local fire department here in Philomath,” explains Nick Lorenz, Nectar Creek co-founder. “Our goal is to be a part of and support this great community; we feel lucky to team up with Philomath Professional Firefighters and give back.”

To take part in the program, Corvallis and Philomath-area residents are encouraged to order Ninkasi and Nectar Creek on-tap during the month of April. Visit the Ninkasi Beer Finder or the Nectar Creek Locator to find local retailers.

About Nectar Creek
Founded in 2012, Nectar Creek makes session meads using raw unfiltered honey sourced directly from beekeepers. Their offerings include a wide variety of dry and carbonated session meads. As one of the leaders of the resurgence of the mead category, Nectar Creek has nearly doubled production every year the company has been in business in order to meet demand. They currently distribute their mead to nine states including; Oregon, Washington, California, Idaho, Texas, Minnesota, Georgia, North Carolina and South Carolina. To learn more about the company and track their progress pick up a bottle off the shelf, visit NectarCreek.com or follow them on social media.

About Big Foot Beverage
Bigfoot Beverages is an Oregon company rich in family tradition, steeped in community involvement, and an unwavering commitment to delivering quality beverages. Bigfoot is the story of two long-time Oregon families: the LeFevre’s and the Moore’s. They entered the beverage business decades ago.  Both discovered that they shared the same values, work ethic, and commitment to their employees, and support for their communities. Lewis Fullerton, an orchard owner, from Winston, Oregon, opened Fullerton Beverage in Roseburg, in 1947. In 1969, William Moore had already had a distinguished career with Coca Cola, Portland Bottling Company and Alpac Corporation, when he bought the Pepsi Cola Bottling Company of Bend, that serves customers in Central Oregon’s Deschutes, Jefferson, Crook, and Harney counties. In 1988, the Moore and LeFevre families purchased the Willamette Beverage Company, which included Pepsi distribution centers in Eugene, Coos Bay, and Newport.  Peter Moore was named president and general manager of the partnership, until he became chairman of the board in 2005. The companies would serve 10 counties and employ 300 people.