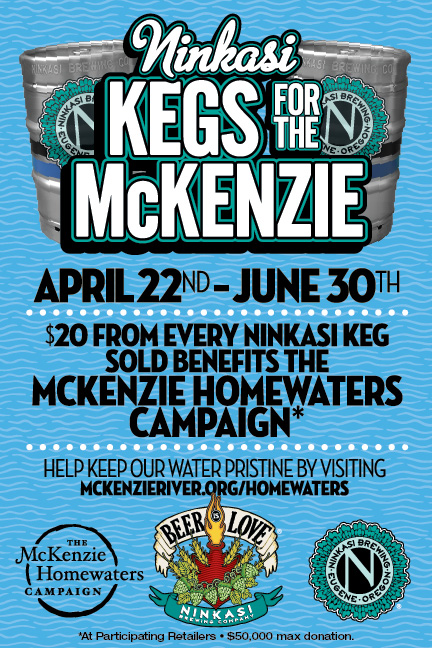 EUGENE, Ore.—April 19, 2017—Starting Earth Day, April 22, to June 30, 2017, Ninkasi Brewing Company aims to raise up to $50,000 to preserve its main water source—the McKenzie River. In a program called Kegs for the McKenzie, the brewery will donate $20 of every Ninkasi keg sold at participating bars and restaurants to benefit the McKenzie River Trust and its McKenzie Homewaters Campaign.

Community partner, McKenzie River Trust, a nonprofit working to help people protect and care for the lands and rivers they cherish in western Oregon, seized an opportunity to conserve two miles of riverfront called Finn Rock Reach. Announced earlier this month, the Trust aims to raise $6 million to fund initiatives to protect, conserve and restore this land and other McKenzie acreage through its McKenzie Homewaters Campaign.

“We are incredibly fortunate first to have the McKenzie River as our homewaters, and second, to have opportunities like we do at Finn Rock Reach,” says Joe Moll, McKenzie River Trust executive director. “Rich river history, spectacular habitat, crystalline water, and fantastic recreational access are all rolled into one at Finn Rock Reach—that makes this project a true gem.”

Ninkasi knows quality beer isn’t possible without clean, quality water. More than 95 percent of each beer bottled by the brewery is made up of water from Oregon’s McKenzie River, an excellent ingredient for crafting excellent beer.

“We love the exceptional quality of the water the McKenzie [River] provides; especially its contribution to making great beer,” says Ninkasi CEO and co-founder, Nikos Ridge. “There are a multitude of awesome outdoor activities provided by the McKenzie River watershed region; we are excited to support the work of the McKenzie River Trust to preserve and protect all of these wonderful attributes now and for future generations.” 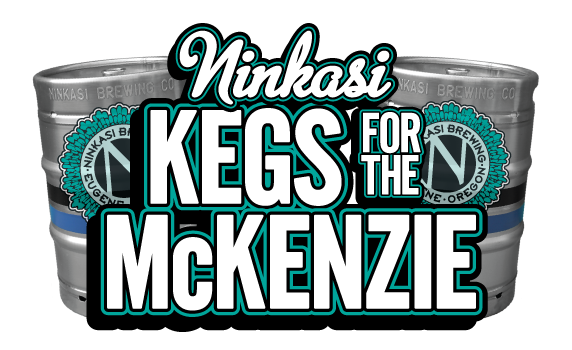 “So many good things flow from the McKenzie River,” explains Moll. “We are fortunate to have such a treasure, and to have great partners like Ninkasi, whose creative philanthropy shines again in the Kegs for the McKenzie initiative.”

To participate in Kegs for the McKenzie, beer drinkers are encouraged to order Ninkasi on-tap April 22 – June 30, 2017 at participating bars and restaurants throughout Oregon. Locations that serve Ninkasi can be found by using the Ninkasi Beer Finder.

Learn more about the McKenzie Homewaters Campaign by visiting: http://www.mckenzieriver.org/homewaters/.