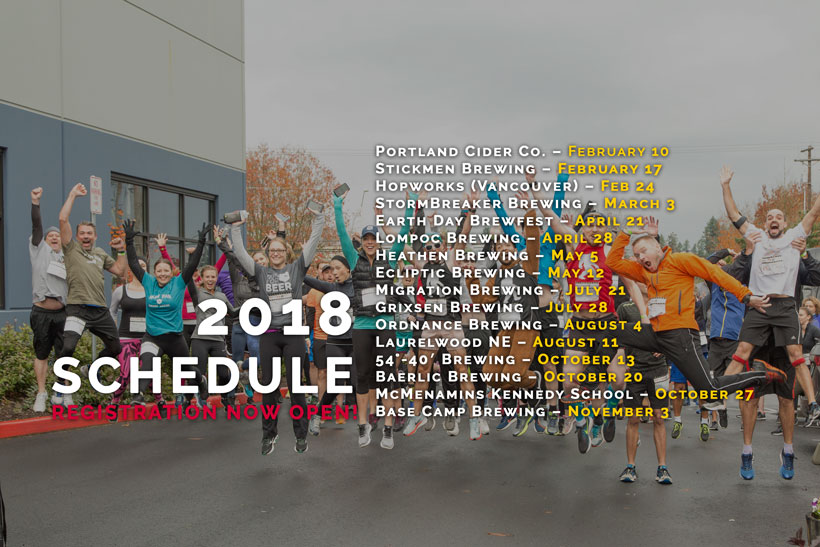 As the local running group enters its third season, the Oregon Brewery Running Series has announced its 2018 Running Schedule that features over 16 events in the Portland area.

Part of the seven state Brewery Running Series, the Oregon chapter will partner with 16 breweries in the Portland metro area on 16 unique 5K running events. This series of fun runs is open to all skill levels and is designed to promote healthy activities while enjoying craft beer throughout Oregon and Southwest Washington.

Participants walk, jog, or run approximately 3.1 miles, then enjoy a celebratory beer at a designated brewery. Everyone is invited to enjoy the day’s entertainment that includes live music, great food, prize giveaways and opportunities to interact with partners and sponsors. Everyone receives 1 complimentary craft brew and a collector’s pint glass or seasonal swag item.

The series also focuses on building community. With smaller crowds of 75 – 175 people, the Oregon Brewery Running Series events aren’t your typical 5k races that shut down major thoroughfares as speedy racers blast to the finish line. Rather, team members and brewery staff come together to create a casual, comfortable environment for runners and beer drinkers alike, celebrating healthy lifestyles and community.

The nearly sold-out kickoff event (as of this post there are only 2 available spots) takes place on Saturday, January 13. Participants will be treated to beer samples from participating breweries and a taco bar courtesy of On Running, the fastest growing global running brand with it’s U.S. headquarters in Portland. Attendees may also sign up for series passes at up to 50% off.

Registration is $30 per event; all participants receive 1 local beer, seasonal merchandise or collector’s glassware as well as the opportunity to partake in brewery tours, product demos, special giveaways, and a special invitation to enjoy the days’ scheduled festivities: live music, food, yard games, and more.