Beginning on Friday, January 25, 2019, fans of The Unipiper will be able to find Unipiper Hazy IPA in a small run of limited-edition 22 oz silk screened bottles that features artwork by local artist Beth Kerschen. Unipiper Hazy IPA will also be available on draft and then come March 2019, look for 6-pack cans of the unfiltered, hazy IPA. 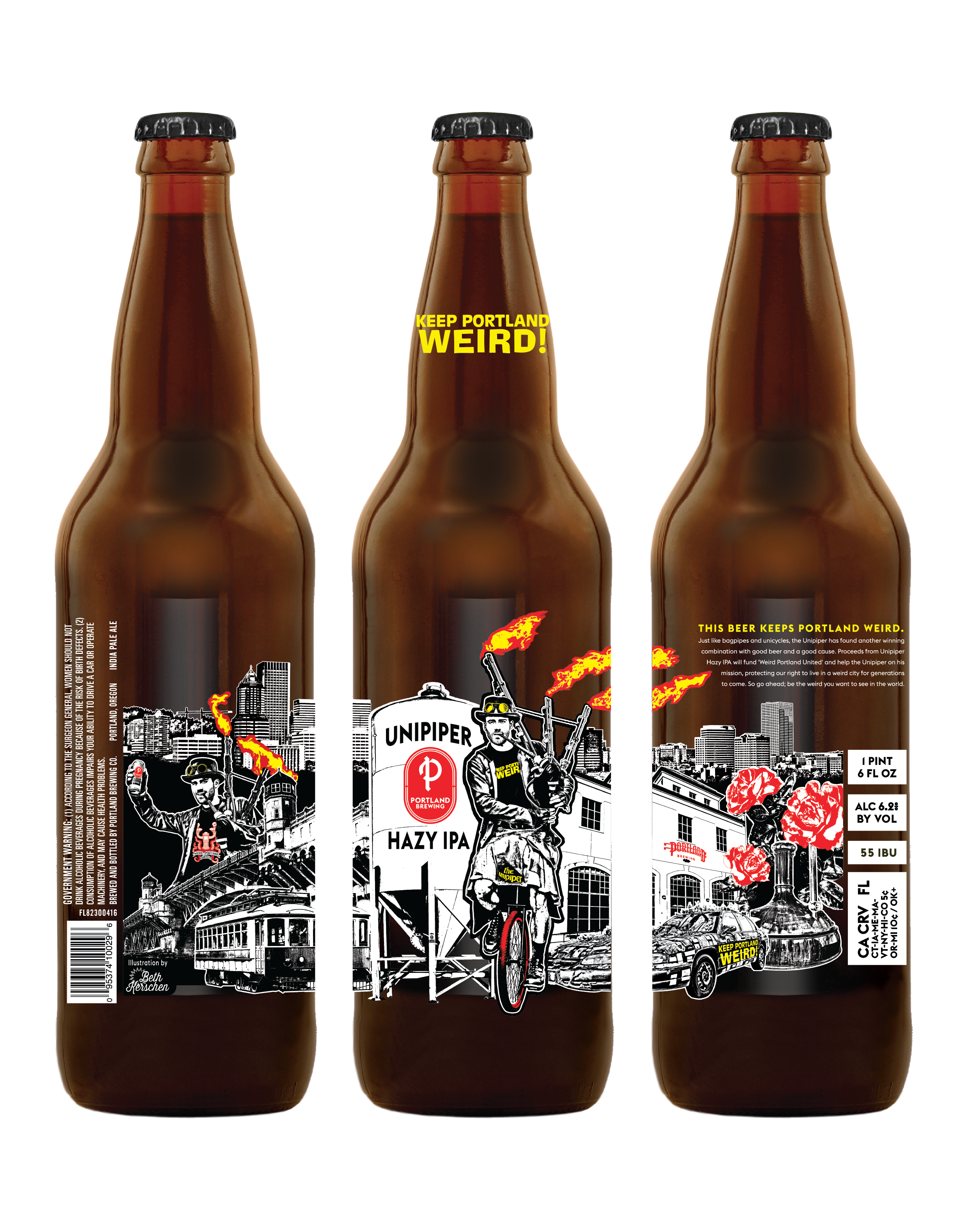 Unipiper Hazy IPA represents the first of Portland Brewing’s “Keep Portland Weird” year-round series of collaborations. The series features distinctly Portland collaborative brews with the aim of highlighting each collaborator’s contribution to keeping Portland weird. Since 2007 The Unipiper has been riding his unicycle around uniquely Portland attractions and festivals dressed as a variety of famous characters, from Darth Vader to Bigfoot, while playing a set of flame-throwing bagpipes.

“The Unipiper Hazy IPA is not just another beer though! That would be too normal!” says Brian Kidd, the man behind The Unipiper masks. “It also signals the beginning of a new era in Portland’s ever evolving weirdness–the founding of Weird Portland United, a charitable effort that has been a dream of mine for years. Thanks to the seed donation from Portland Brewing, Weird Portland United will help create a weirder tomorrow where everyone is inspired to contribute to the city’s now famous culture of weird.”

For this first beer in the series Portland Brewing will donate $5,000 to help kickstart Weird Portland United. WPU is a new nonprofit organization founded by The Unipiper that will discover, support, and cultivate up-and-coming and long-standing purveyors of weird through official Weird Awards, an official register of Weird Historic Places, the Weird Portland Museum, tours of Weird Portland, a Weird Portland Festival, and more.

“We are honored that Portland Brewing Company bears our city’s name, and with that comes the responsibility to ensure we help keep the culture of weirdness alive as Portland evolves,” says Robert Rentsch, Portland Brewing General Manager. “By creating the Keep Portland Weird beer series we celebrate and support the city’s spirit, which moves us and other passionate Portlanders alike to try the unusual, get out of the box, and grow our crafts.”

The recipe for Unipiper Hazy IPA was a collaboration between The Unipiper and Head Brewer Ryan Pappe at Portland Brewing. An avid homebrewer, The Unipiper’s favorite beers are IPAs with blasts of tropical fruit flavor from the latest of hop varieties. This beer is smooth and juicy with a tangerine citrus and fruit “pop” that comes from a huge dry-hop addition of Denali and Amarillo hops. At 6.2% ABV the beer is perfect for a couple pints while light enough to not weigh you down on your unicycle ride to goat-yoga class.

When it came time to choose an artist for the limited-edition bottle, The Unipiper turned straight to local Portland artist Beth Kerschen. Beth’s intricate illustrations and collages celebrate the best of what’s weird about Portland and she has created an exclusive design for this beer. 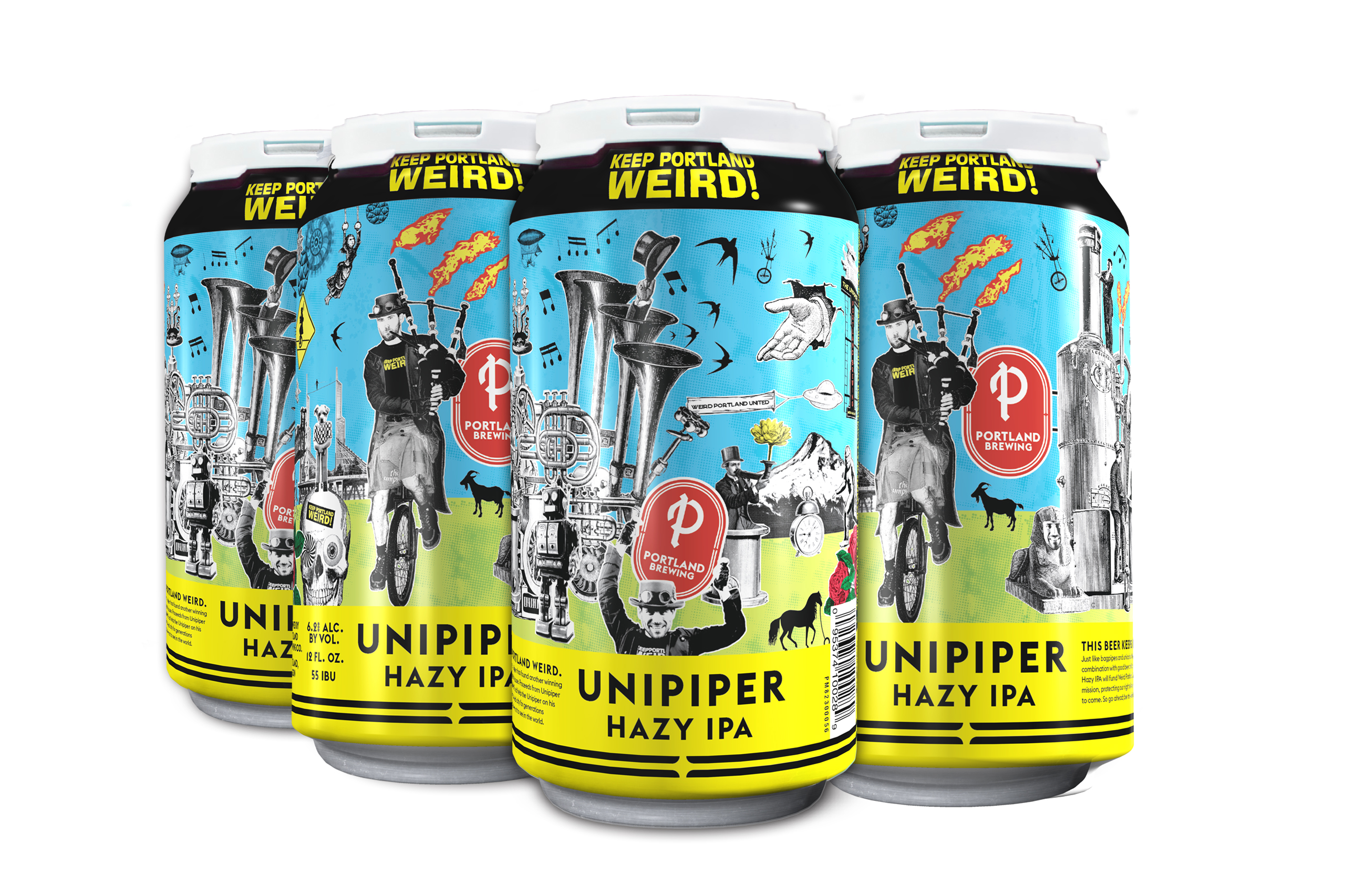 Unipiper Hazy IPA Beer Release
Celebrate the release of Unipiper Hazy IPA and learn about the ways WPU is planning to Keep Portland Weird by joining The Unipiper at bottle release appearances throughout the city where you can pick up the limited edition bottles, take pictures with The Unipiper, and have your bottle signed. The first release is at the Customer Appreciation Day for the newly remodeled 7-Eleven on SE Foster and 97th on January 25 from 4-7pm. The second is at Music Millennium on SE Burnside on February 02 from 4-6pm.

You will also find the limited bottles and draft at a variety of stores and bars in Portland. Beginning in March the 12 oz 6-pack cans will see a larger distribution throughout the Portland Metro region. 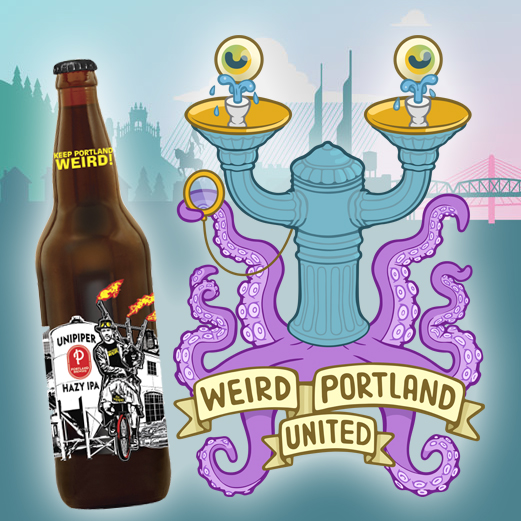