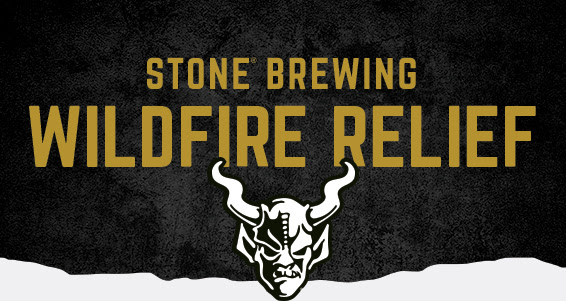 With the recent major devastation from the Northern California fires Stone Distributing, a division of Stone Brewing, has donated $72,000 of its sales in the month of October to those affected by this massive fire. This fire spread across a good chunk of Sonoma County and was the cause of so many families being displaced from their burned down homes.

This generous donation of $72K was from a percentage of Stone Brewing beer sales along with 17 of its supplier partners including Bear Republic and Russian River, both breweries that had staff affected by these massive fires.

The funds that were raised were sent to Direct Relief, providing emergency assistance to California’s Office of Emergency Services, the Napa County Public Health Department and more than 40 health centers and clinics in the affected region.

“We’re relieved to know that our fledgling team at our soon to open Stone Brewing Napa location, and our friends at Russian River and Bear Republic are safe. Employees, colleagues, friends, family and neighbors of everyone in that region, however, have been dramatically affected,” said Dominic Engels, Stone Brewing CEO in a statement. “Rallying our supplier brand partners proved to be enormously impactful, and I’m humbled by the enthusiastic response and outpouring of support that we received surrounding this effort.”

A huge thank you goes out to the following list of breweries and cideries that all pitched in and donated to Stone Distributing’s relief efforts.

In addition to the $72,000 donated to victims of California’s wildfires, Stone supported the victims of Hurricanes Maria and Harvey via a portion of sales from every pint or growler fill of Stone IPA and Stone Delicious IPA at the company’s locations. The company also donates a portion of proceeds of all brewery tours to a different local organization each quarter. In Sum, Stone donated $86,345 to charity last quarter, an effort made possible by its generous partners and charitable fans.