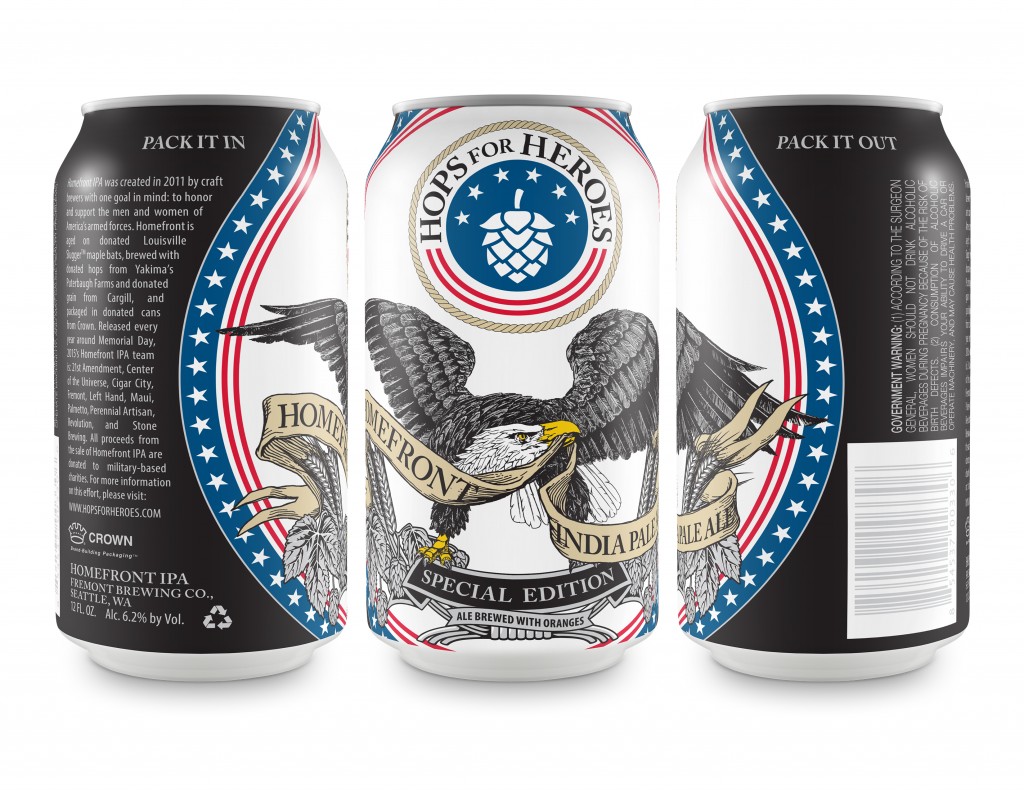 Four years ago Hops for Heroes was created when Fremont Brewing teamed up with then Seattle Mariners relief pitcher and currently of Center of the Universe Brewing in Virginia, Chris Ray. The two decided to brew Homefront IPA to honor and support our men and women of our armed forces. As this budding 100% charity beer has now grown to its fifth season, it now includes ten US craft breweries that stretch across the country.

Appropriately released every year around Memorial Day since its inception, Homefront IPA has raised over $500,000 for various armed forces charities. The one goal in mind when Homefront IPA was first brewed was to honor and support the men and women of America’s armed forces. This year’s recipient will be Soldier’s Angels.

To make this beer the most charitable it can possibly be organizers have obtained various ingredients donated from some fine companies. Homefront IPA is aged on donated Louisville Slugger maple bats, brewed with donated hops from Yakima’s Puterbaugh Farms and donated grain from Cargill, and then packaged in donated cans from Crown. The final beer is an IPA that comes in at 6.2% ABV.

For 2015, the participating breweries include:

This year the ten great breweries mentioned above are each brewing Homefront IPA all across the country. Each brewery is planning something different to celebrate the release and connect their community to the worthy cause. Examples of these partnerships include several breweries bringing in volunteers to zest oranges for the beer, beer releases at local Minor League ballparks, celebrity brewers, and full market awareness through mutual release parties at the breweries and local accounts.

For those in the Seattle area, Fremont Brewing will host the release party for its version of Homefront IPA in its Urban Beer Garden located at 1050 N 34th Street on Memorial Day from 11:00am to 3:00pm.

Homefront IPA is the breweries way of saying “thank you” to all of the men and women who dedicate themselves to protecting our safety and our way of life. The beer is released around Memorial Day each year in hopes to give a reminder of how important the past, present, and future members of our armed forces are and to remember the ultimate sacrifices so many have made in their pursuit of our freedom.

This year, Homefront IPA will benefit Soldiers’ Angels, an organization whose mission is to ensure that “No soldier goes unloved.” Soldiers’ Angels provides aid and comfort to the men and women of the United States Army, Marines, Navy, Air Force, Coast Guard, their families, and a growing veteran population.

Hops for Heroes is also excited to have Louisville Slugger, Hops Direct, Cargill, and Crown Packaging all back as the national sponsors for bats, hops, grain, and cans.

The result of this desire is Homefront IPA, a beer Aged on Louisville Slugger maple bats. This IPA does more than just quench your thirst; it improves the lives of our soldiers.