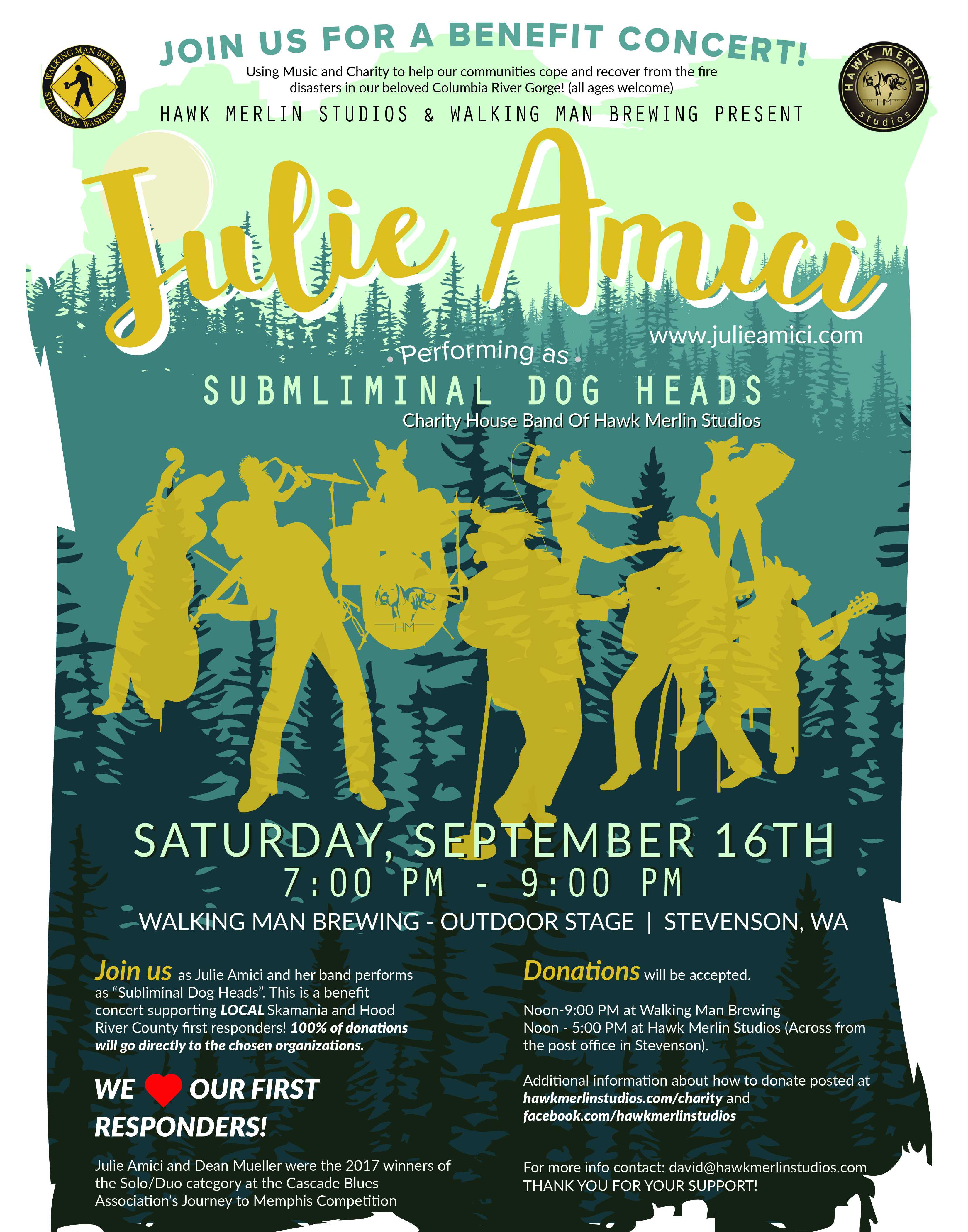 Stevenson, WA (September 8, 2017) – Walking Man Brewing and Hawk Merlin Studios in Stevenson, WA will host a benefit concert on Saturday, September 16th from 7:00 PM to 9:00 PM.  The concert will feature Julie Amici performing on the beer garden stage at the brewery. The goal is to raise funds for the Stevenson Volunteer Firefighters Association and the volunteer emergency response teams, Wind River Search and Rescue and the Crag Rats of Hood River County.

Julie Amici and her band will perform an entertaining mix of soulful country, blues and jazz. Julie’s strong, yet sweet voice is reminiscent of the 50’s when female singers ruled the world of music, a time when jazz and blues co-mingled at the height of popular culture. For this event they will be performing under the name Subliminal Dog Heads, the charity house band of Hawk Merlin Studios.  The fictitious band was created as a means for charitable events.  This will be Subliminal Dog Heads inaugural performance.

“When Walking Man Brewing had to cancel their plans for their September 9th Hoptoberfest event, we realized the importance of pressing forward with our event. It seems even more important now to create the best event possible and have a positive impact on our community and its residents by supporting the first responders that protect and serve us all. With the collaboration and support from Walking Man Brewing, we are excited to offer this event to the public,” said David Bunker of Hawk Merlin Studios.

Donations will be accepted from noon to 9:00 PM at Walking Man Brewing and from noon to 5:00 PM at Hawk Merlin Studios. All donations will go directly to the chosen organizations. Additional information about how to donate is available at hawlkmerlinstudios.com/charity and walkingmanbeer.com/hawkmerlin. The concert is free for all ages.

About Walking Man Brewing
Nestled in the small town of Stevenson, WA in the scenic Columbia River Gorge, Walking Man Brewing began impacting the Northwest craft beer scene in late 2000. Garnering medals and honors in some of the top beer competitions in the world, it has long since become a destination for beer enthusiasts from around the globe.

The brewery and brewpub is located at 240 SW 1st Street in Stevenson, Washington just 45 minutes east of Portland near the Bridge of the Gods. For more information about Walking Man Brewing including brewpub hours, menus and happenings, please visit www.walkingmanbeer.com or contact Tabatha Wiggins at twiggins@walkingmanbeer.com / (509) 427-5520.