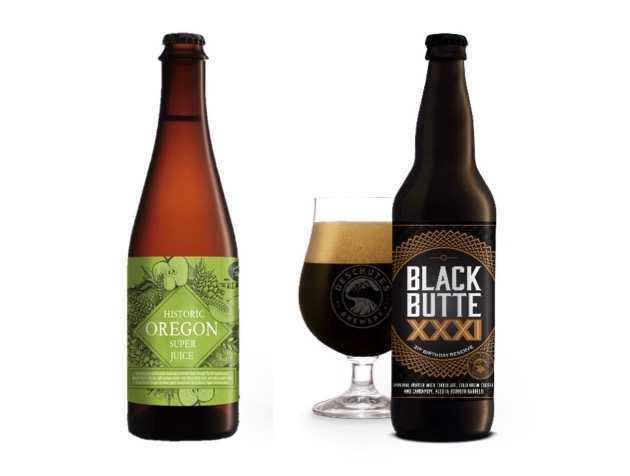 In less than one week, Deschutes Brewery will celebrate its 31st anniversary. Through these 31 years, Deschutes Brewery from the mountain town of Bend, Oregon has gone on to be a top 10 brewery ranked by members of the American Homebrewers Association in Zymurgy’s Best Beers in America. And with well over 7,400 breweries this is quite the accomplishment!

Both the Portland and Bend Public Houses will host celebrations on Thursday, June 27th. Each location will feature Black Butte XXXI on draft, in bottles and other specials. Then on the following day, Friday, June 28th, Deschutes will release Oregon Historic Super Juice in limited 500mL bottles as there are only 100 cases of this beer available.

Deschutes Brewery Portland Public House, located at 210 NW 11th Avenue, will host the Deschutes 31st Anniversary from 11:00am-11:00pm on June 27th. The Public House will have sample trays of Black Butte Anniversary Editions along with a specially prepared food menu to complement the new beer release. 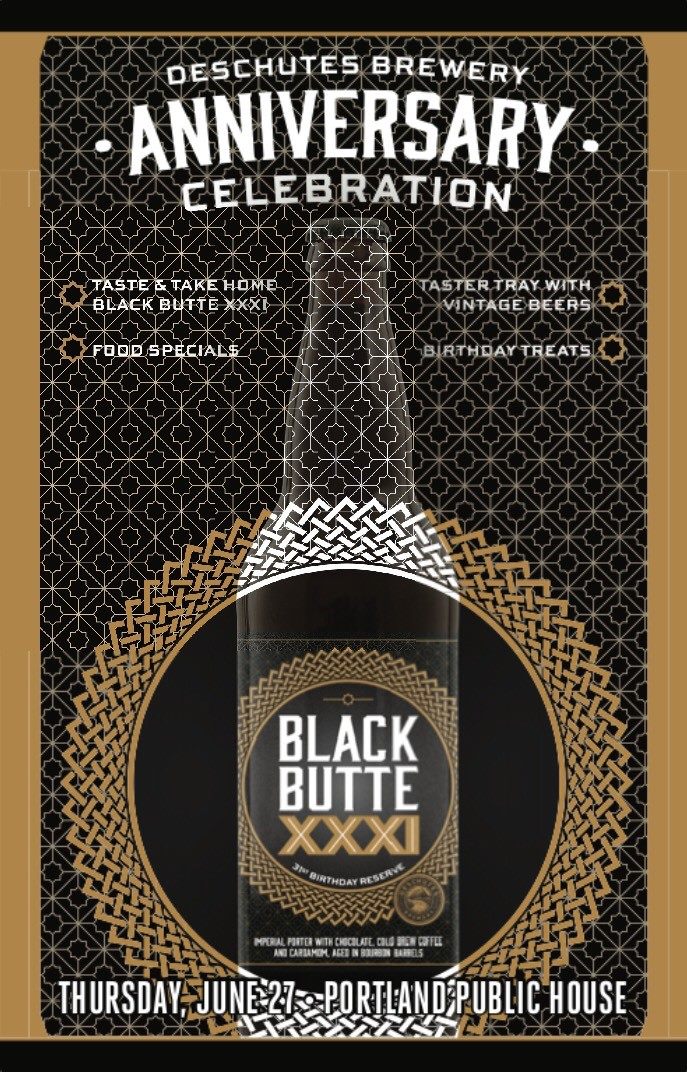 Deschutes Brewery Bend Public House, located at 1044 NW Bond Street, will host the Deschutes 31st Anniversary on June 27th from 5:00-10:00pm. Since this celebration is at the original home of Deschutes, the brewer is going all out with a Luau Party.

Wear one of your favorite Hawaiian shirts, grass skirts and coconut bras and enjoy the island vibes. There will be live music from The Mostest, GBots & The Journeymen, and Tone Red along with tasty luau style eats and the official release of Black Butte XXXI Anniversary Porter, featuring chocolate, cold brew coffee, cardamom, and bourbon barrel aged. If you ride your bike to the luau you’ll be rewarded with a sweet surprise! Cake cutting and founder’s toast from Gary Fish will take place at 7:00pm. 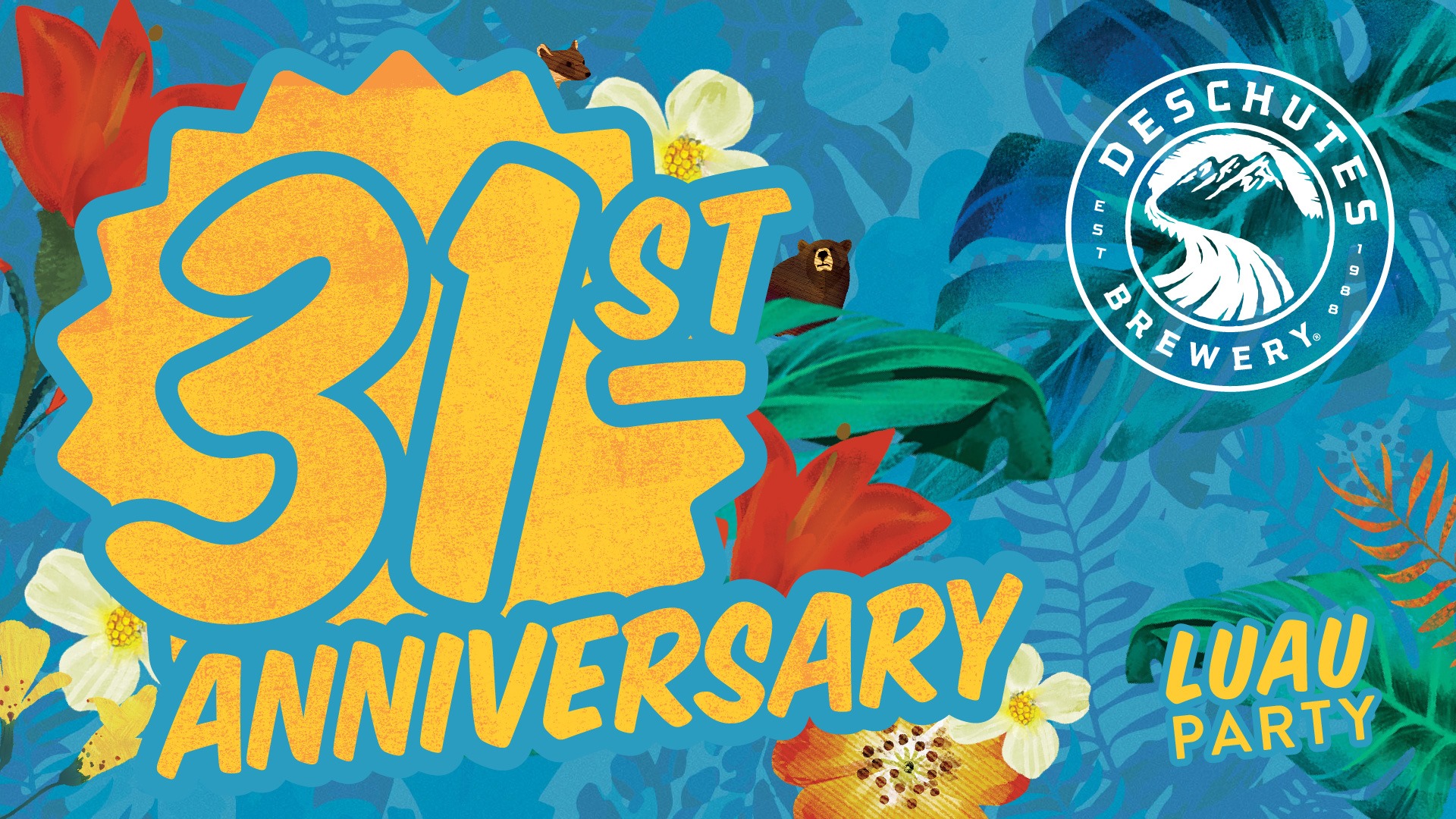 When it comes to the two new releases, here are descriptions for each of the beers provided by Deschutes Brewery.

Oregon Historic Super Juice is the grand finale of the brewery’s 30th anniversary family tree collaboration beers. In honor of their Bend, Oregon roots, Deschutes invited several of the brewery’s alumni to collaborate on special beers around the momentous occasion. Historic Oregon Super Juice, a partnership with Paul Arney of The Ale Apothecary, former head brewer at Deschutes Brewery’s Bend pub, has been aging for the entire year in seasoned Ale Apothecary barrels and is ready to release just in time for the brewery’s 31st birthday.

Historic Oregon Super Juice is wild fermented with The Ale Apothecary’s house mixed culture. Honoring Ale Apothecary’s authenticity of production, all ingredients for this beer were locally sourced in Oregon including heirloom apples handpicked by In Cahoots Apple Collaborative in Central Oregon where the hand-pressed apple juice was fermented spontaneously from the yeast on the skins of the apples, hops from Goschie Farms out of Silverton and malts from Mecca Grade Estate Malt in Madras. “We can do all of this from Oregon, what a great place to live!” said Paul Arney.

A true example of an appreciation for craft beer culture, this was a special collaboration for both brewers. “This beer is meaningful,” said Ale Apothecary’s founder Paul Arney. “It’s about my relationship with Deschutes, the place where I got my start.”  Veronica Vega, director of product development at Deschutes shared the sentiment. “Paul taught me how to brew at the Bend Pub and when he left to start The Ale Apothecary, I got the opportunity to take over his position as Bend Pub Brewer. I will always be grateful for his mentorship and friendship in beer.”

An extremely exclusive, limited release, Historic Oregon Super Juice is funky and tart at 6.3% ABV and 10 IBUs with notes of baked apple and light graham cracker. This release of less than 100 cases, will be available in 500mL bottles for sale at the Deschutes Brewery Bend and Portland pubs and Bend tasting room, as well as The Ale Apothecary’s tasting room on Friday, June 28th.

Deschutes brewers love to experiment with this beer and this year were inspired by Turkish coffee and added chocolate, cardamom and cold brewed coffee from Third Rock Roastery, a locally owned roastery by Deschutes Brewery co-owner Scott Hughes. BBXXXI is 80% barrel aged in oak bourbon barrels.

This imperial porter is 12.2% ABV and 50 IBU and is available in hand-dipped waxed 22-ounce bottles and draft and will ship to wholesalers on June 24 across Deschutes’ full distribution footprint.