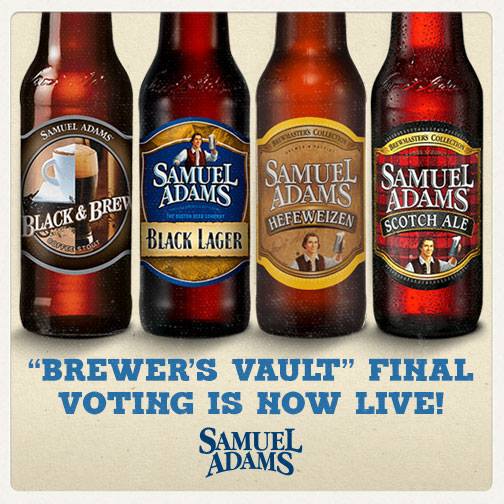 Back in May Samuel Adams unveiled sixteen beers that have been brewed and have since been retired to the vault. These sixteen beers were up for vote to see which four would advance to the final round. From the original sixteen, four beers have made the final round that consists of Black & Brew Coffee Stout, Black Lager, Hefeweizen, and Scotch Ale.

“We’ve been brewing boundary-pushing beers for over 30 years, but with innovation comes the inevitability of having to tuck away the recipes for some our favorite brews to save for another day,” said Samuel Adams founder and brewer Jim Koch. “We hear from our drinkers nearly every day asking us to re-release their favorites, so we’re excited to make these brews available once again on a national level.”

These four beers were from the original sixteen that consisted of the following.

Voting is open now through Monday, August 10th (you may vote once per day) for Black & Brew Coffee Stout, Black Lager, Hefeweizen, or Scotch Ale.

Which beer are you voting for?