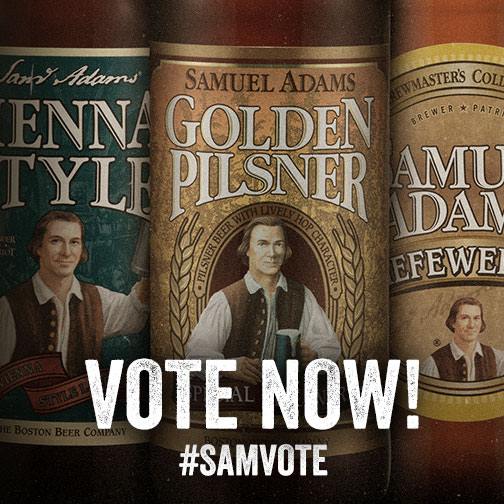 BOSTON, May 11, 2015 – Over the years, the brewers at Samuel Adams have released hundreds of beer styles, and crafted more than 60 styles last year alone. Although they may not all be in current rotation, they are far from forgotten. Craft beer drinkers reach out to the brewers daily with pleas to bring back their favorite Samuel Adams styles, and beginning today they can help make that happen. Based on the input of beer drinkers everywhere, Samuel Adams brewers will pull recipes from their “vault” and ultimately choose two winning brews to be re-released nationally for a limited time. Through online and in-person voting, drinkers will determine which two brews will emerge from the Samuel Adams “vault” for national distribution in early 2016.

Here’s how craft beer drinkers can make their voices heard:

“We’ve been brewing boundary-pushing beers for over 30 years, but with innovation comes the inevitability of having to tuck away the recipes for some our favorite brews to save for another day,” said Samuel Adams founder and brewer Jim Koch. “We hear from our drinkers nearly every day asking us to re-release their favorites, so we’re excited to make these brews available once again on a national level.”

The 16 brews from the Samuel Adams “vault” include:

Craft beer lovers can visit SamuelAdams.com/drinker-favorites for more information and to vote for their favorite brews from the Samuel Adams “vault.”