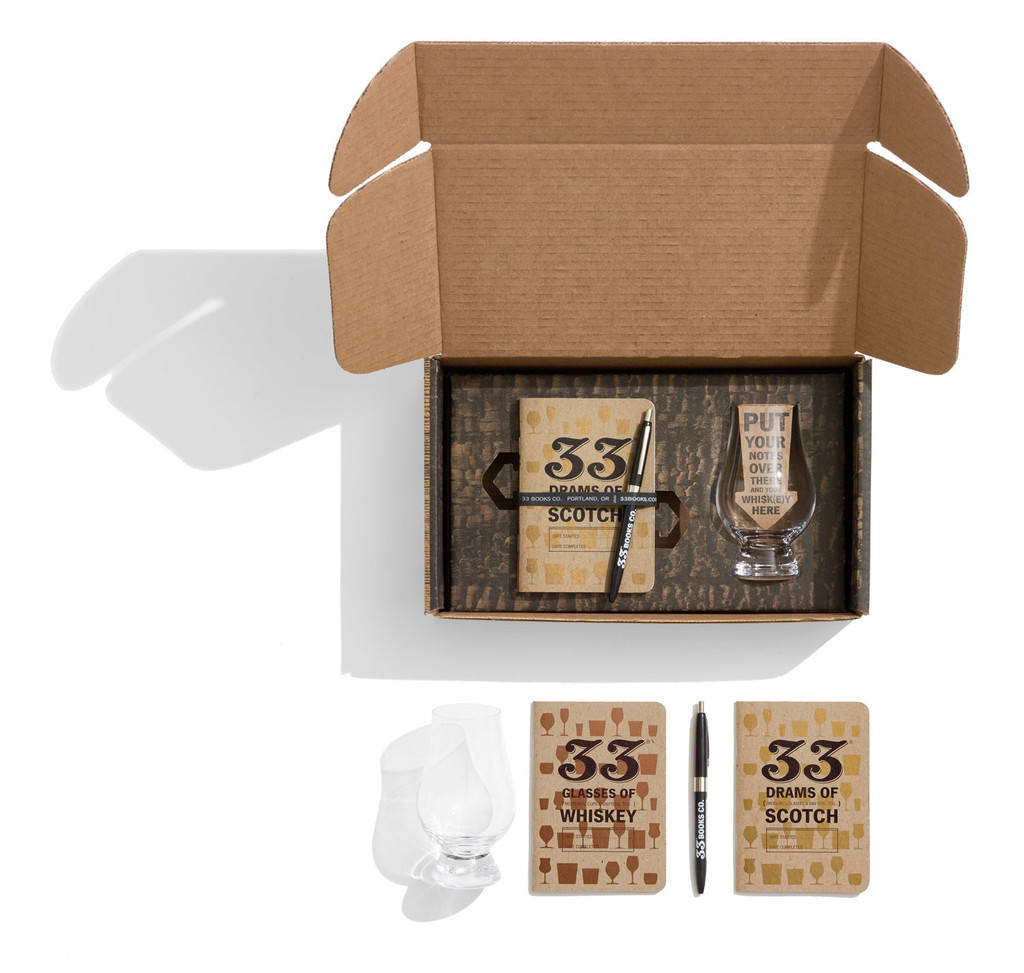 Just in time for graduations and Father’s Day, Dave Selden at 33 Books has a few new Tasting Sets that will make great presents for people of all ages. These include the new Whisk(e)y Tasting Set, Hot Sauce Tasting Set, and Doughnut Tasting Set.

Each of these three sets are well planned and thought out accompanying piece put together from Selden here in Portland. All three sets contain a selected book from his 33 Books series that relates to each featured set. The sets also contain a few other items that Selden sources out that will make each of these experiences much more fulfilling. Starting at $20, these sets will make an excellent gift!

Here’s a rundown from Selden of each of the three Tasting Sets.

Whisk(e)y Tasting Set
When I was developing my whisk(e)y tasting journals, I consumed a fair bit of “liquid research.” In my hand was always one glass — the Glencairn glass. Winner of the “Queen’s Award for Innovation,” it perfectly presents Scotch and bourbon, with an emphasis on aroma. The kit includes one glass, two books (33 Drams of Scotch and 33 Glasses of Whiskey), and a pen in a bold, whisk(e)y barrel-inspired box that includes some tips on tasting. MSRP: $30

Hot Sauce Tasting Set
I had the opportunity to try quite a few sauces in developing 33 Drops of Hot Sauce. The two bottles included in this kit were and remain favorites: Marshall’s Haute Sauce Habañero Carrot Curry and Horsetooth’s “O-Face.” Both are what I’d call culinary sauces that pack some heat but mostly add a unique flavor that complements (rather than overwhelms) the foods you add sauce to. The kit also includes three journals and a click pen in a spicy, laser-cut box that silkscreened by hand in a range of fiery colors. MSRP: $32

Doughnut Tasting Set
The delightfully-deluxe doughnut tasting kit includes two copies of 33 Doughnuts. Draw your doughnuts inside each book using the three American-made colored pencils, selected to provide the perfect pastry palette. Top off your drawing with one of four sprinkle stickers — two chocolate and two rainbow stickers are included in the silkscreened case. MSRP: $20

To order any of these sets or to check out any of the other creative offerings from Selden, please check out his website at 33books.com.