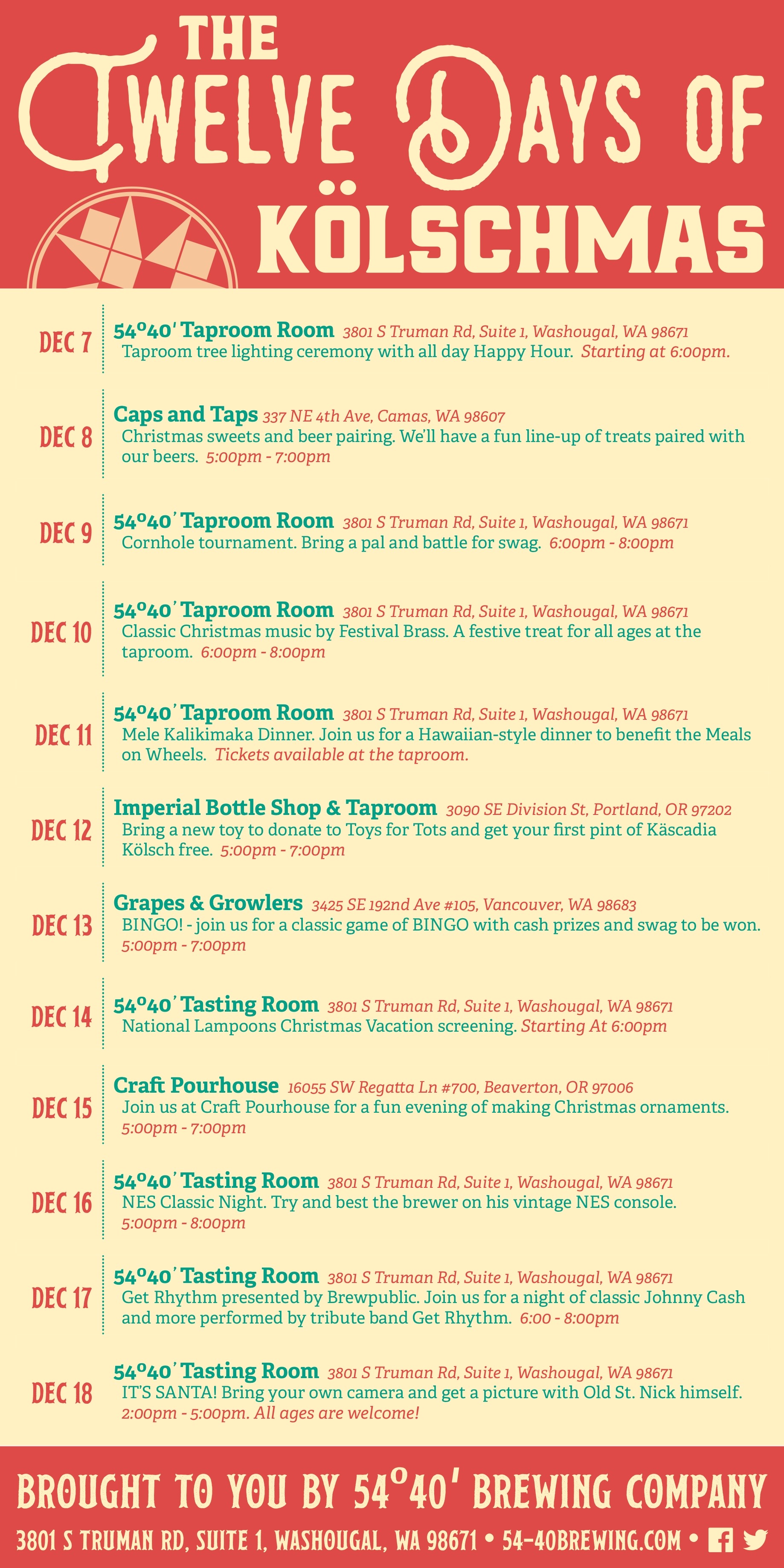 After its first 12 day run this past year in December, 54° 40’ Brewing returns with its 2nd Annual Twelve Days of Kölschmas for 2016 when the brewery celebrates its to favorite things, Käscadia Kölsch and Christmas! This year’s celebration will take place from Wednesday December 7th through Sunday December 18th. BREWPUBLIC is excited to present the area’s best Johnny Cash cover band, Get Rhythm, when they perform at 54° 40’ Brewing for the very first time on Saturday, December 17th.

“We had such a blast meeting new folks at last year’s Kölschmas events that we wanted to keep the festivities going and make this an annual event.” said Bolt Minister, brewer and owner of 54° 40’ Brewing in a news release. “I brew Käscadia Kölsch to be a beer that brings people together and there’s no better time than the holidays to make that happen. So, the 12 Days of Kölschmas is just a natural way for us enjoy the company of other beer lovers.”

For 2016, the 12 Days of Kölschmas will feature 8 events inside the brewery’s taproom in Washougal, Washington and the other 4 events will be held at Caps and Taps, Imperial Bottle Shop & Taproom, Grapes & Growlers, and the new Craft Pourhouse. Highlights at the taproom include, a tree lighting ceremony kickoff event, a Mele Kalikimaka Hawaiian dinner to benefit Meals on Wheels, a brass septet performing classic Christmas songs, movie screening of National Lampoon’s Christmas Vacation, cornhole tournament, and Beat the Brewer challenge on a vintage NES video game console.

Outside of the taproom there will be two events in SW Washington at Caps & Taps, where the brewery will pair Christmas candy with Käscadia and other 54° 40’ selections, and at Grapes and Growlers where the brewery will have a BINGO! night with cash prizes and swag. Portland has two events as well, the first at Imperial Bottleshop and Taproom, where you’ll receive a free pint of Käscadia if you bring in a new unwrapped toy for Toys for Tots or a warm coat for Imperial’s own clothing drive. Craft Pourhouse, in Beaverton, will be the final outside event where 54° 40’ will supply crafty supplies to make your own Christmas ornaments while you drink Käscadia Kölsch.

The event will culminate on the weekend of December 17th with BREWPUBLIC presenting Johnny Cash cover-band Get Rhythm. This will be a free all-ages show at the taproom. Lastly, on Sunday December 18th the taproom welcomes Santa Claus! Bring a camera and take your own free pictures with Ol’ Saint Nick from 2-5pm, a great event for kids of all ages!

Here’s a complete rundown of all the events during the 2016 12 Days of Kölschmas.

Monday, December 12th – Imperial Bottle Shop & Taproom
3090 SE Division St., Portland, OR
Bring a new toy to donate to Toys for Tots and get your first pint of Käscadia Kölsch for free from 5:00 to 7:00pm.

Saturday, December 17th – 54° 40’ Brewing Taproom
3801 S Truman Rd., Suite 1, Washougal, WA
Get Rhythm presented by BREWPUBLIC for a night of classic Johnny Cash music performed by the talented Get Rhythm from 6:00 to 8:00pm.

For more information on happenings at the brewery visit: http://www.54-40brewing.com.