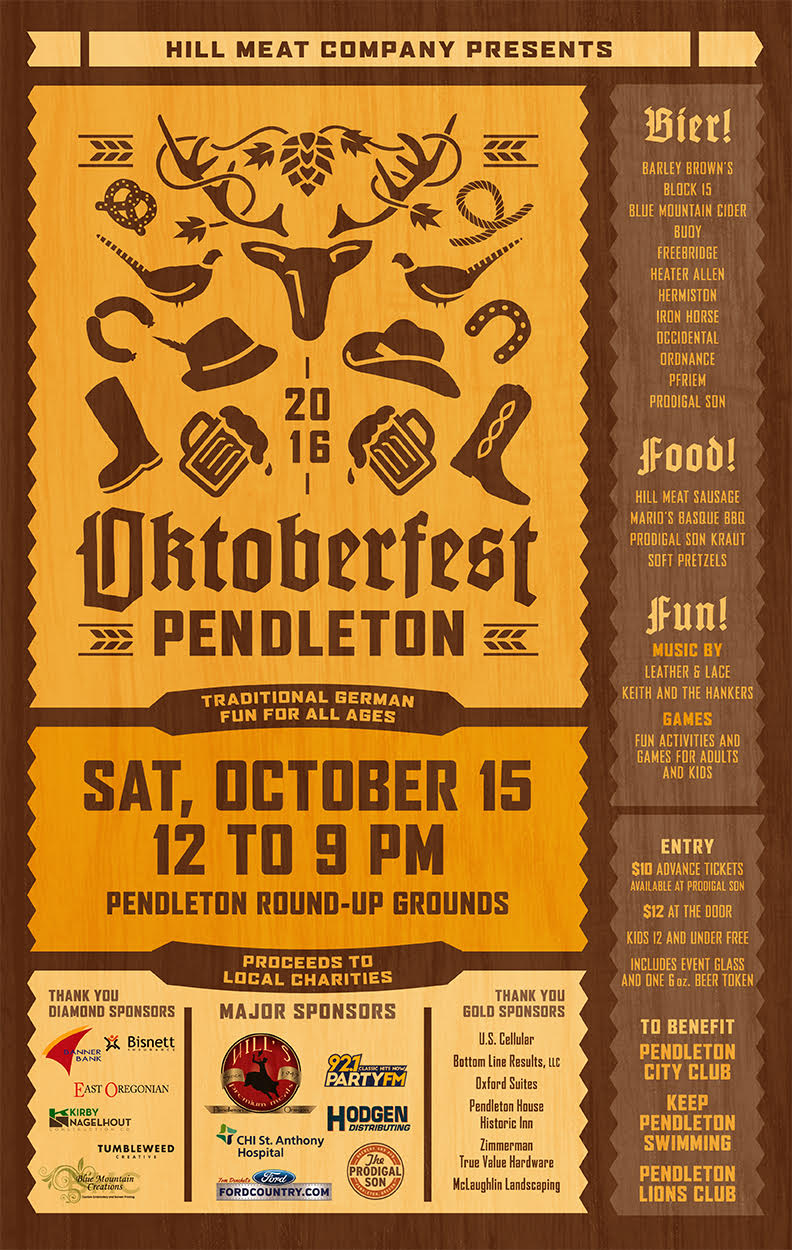 When it comes to the beer being poured at the 2016 Oktoberfest Pendleton, about two thirds are from Eastern Oregon and Eastern Washington breweries. Organizers wanted to keep the festival more focused on the breweries in the area and wanted to feature mainly German-style beers. However, there are more beer varieties pouring than just this style, plus there are a few ciders pouring.

The beer list for Oktoberfest Pendleton is listed below.

And if beer is not your only drink of choice, Pendleton based Oregon Grain Growers Brand Distillery will be mixing up its Ouragon Vodka and Coffee Liqueur to create some tasty libations.

Prodigal Son Brewery’s Chef Matthew Barnes will be providing the German themed food menu for the daylong Oktoberfest. Chef Barnes will be preparing four different sausages supplied Pendleton based Hill Meat Co. Prodigal Son will be bringing its house-made sauerkraut for all the sausages. There will also be a sausage dinner option that will include your choice of one of the sausages as well as house-made German potato salad, a sweet & sour apple & red cabbage salad, and a creamy dill & mustard cucumber salad. There will also be a vegetarian option. Also look for a beer cheese dip to go with warm Bavarian-style soft pretzels. Various mustards will also accompany all of these dishes.

What’s an Oktoberfest without music? Oktoberfest Pendleton will feature a bevy of local musicians. Beginning at Noon, local musicians Leather & Lace will take the stage. Then at 2:00pm Keith & the Hankers will take over and play until 5:00pm, take an hour break and return from 6:00 to 9:00pm.

This year we are offering presale tickets for $10. Tickets will be available to purchase at Prodigal Son Brewery (cash only). Tickets the day of the event are $12. That will include a glass stein as well as one 6 oz drink token. Drink tokens cost $2 a piece and can be used at next years event.

Stay up to date on Oktoberfest Pendleton by following its Facebook page.