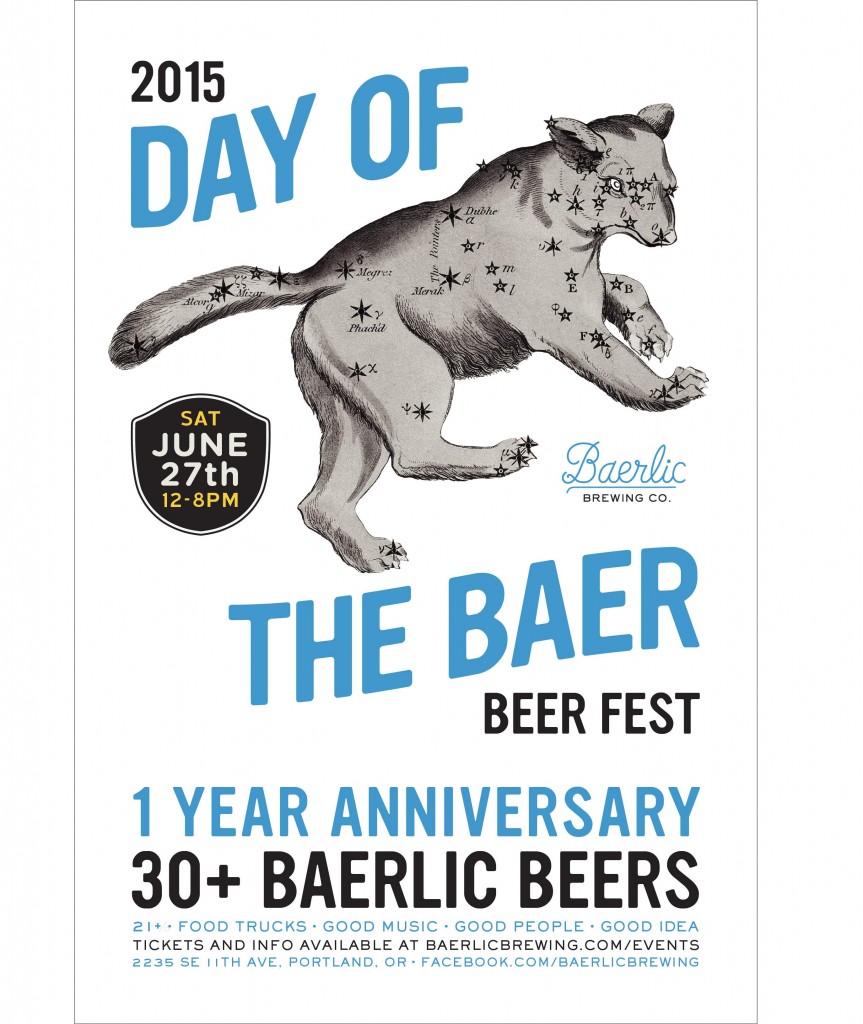 Baerlic Brewing Company officially proclaims the last Saturday in June the Day of the Baer! On Saturday, June 27th, from Noon to 8:00pm, Baerlic will be pouring over 30 Baerlic year-round, seasonal, experimental, barrel-aged, infused, collaboration and cask beers in celebration of our first year in operation! All attendees will receive a Day of the Baer commemorative tulip glass with 10 taster tickets. Beers will be rotating on 22 taps throughout the day joined by Urban German, Taqueria La Merced, Steve Temple Photography dedicated to his grandfather’s life of woodworking, DJ Short Change spinning on the brew deck, and good old-fashioned fun!

Baerlic’s Day of the Baer Beer List (rotating throughout the day on 22 taps):

“When we say The Beer Here is Near and Dear, we still mean it even after our first year,” says co-owner and brewer Ben Parsons. “This event is a celebration of every person who has believed in us and given us a chance this last year. We are better because of them and excited to celebrate our one year anniversary.”  Baerlic is focused on brewing the beers they love to drink and doing it in a way that respects the history and art of brewing while also pushing the boundaries on styles and processes. Beer is beer is beer, and historically hasn’t liked to be pigeon-holed in restraints such as styles and norms and old ways of doing things.

“This year has really proven the outpour of support coming from our incredible employees, friends, family, and the craft beer community in Portland. This community is a special place to be and we are lucky to call it our home now,” says Rik Hall, co-owner and brewer. Day of the Baer is another reason for all of us to come together in celebration of craft beer and everything it brings to Portland.

What the Hell’s a Bearlic?
Literally translating to ‘of barley’ in old english, bærlic reiterates the fundamental idea that all things, no matter how complex or involved, can always be traced backward to a single, simple core or point of view. Our point of view comes from a belief that we are all in this together and that our actions shape our world – by being honest, we are approachable; by being consistent, we are trusted; by being considerate, we can sleep at night; and by choosing to keep it simple, we are able to do this really well.

For additional details, visit the Facebook Event Page or its website’s Event Page.