Barrels, BBQ, Bach and Baerlic, Sunday Parkways with Coalition and the rest of the craft beer events for the week of August 18. 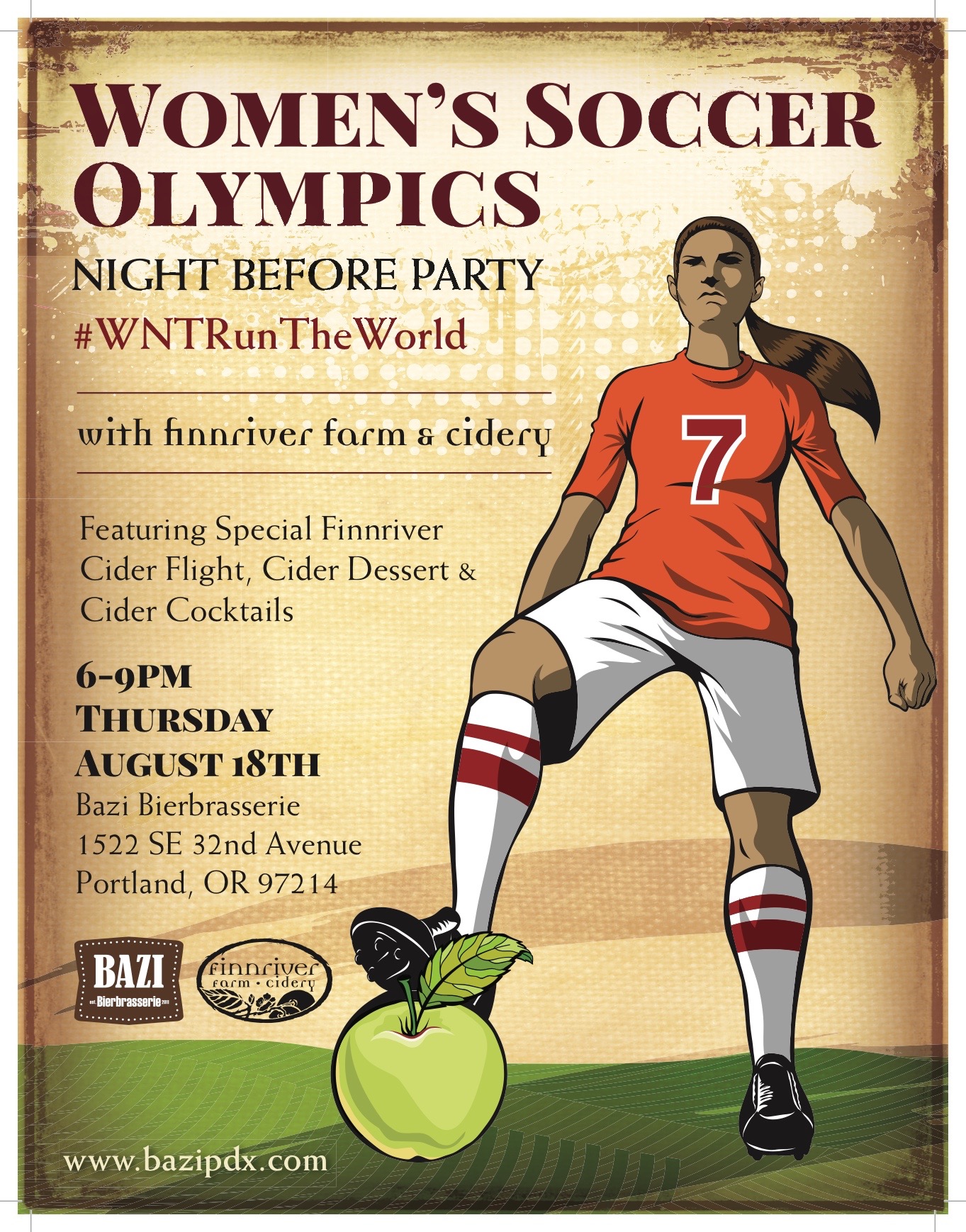 Night Before Party with Finnriver Farm and Cidery
6-9 p.m. Thursday Aug. 18, Bazi, 1522 SE 32nd Ave.;
Join the Finnriver crew and celebrate the night before the Gold Medal match for women’s soccer with a flight of special ciders and a cider dessert utilizing Finnriver’s Sparkling Black Currant and some cider cocktails. Jana and her team will also be on site sampling Finnriver’s various lines of ciders.

A Finnriver cider flight will be available for $10 – 5 oz pours of each of the following four ciders:

10 Barrel ‘Double Barrel’ Battle of the Beers
Saturday Aug. 20, Belmont Station, 4500 SE Stark St.;
There’s a Battle of the Beers among 10 Barrel brewers Tonya Cornett in Bend, Shawn Kelso in Boise and Whitney Burnside in Portland and the brewery has even put together a beer variety pack featuring a beer from each of the brewers. But why mess around with bottles when the Station has all three beers on draft this Saturday?

Fans vote for their fave and the winning brewer will be crowned at a party at his or her 10 Barrel location. Also, the Station crew will be pouring three more special 10 Barrel beers, one from each brewer:

Sunday Parkways with Coalition Brewing
11 a.m. – 5 p.m. Sunday Aug 21, Coalition Brewing, 2705 S.E. Ankeny St.; kids & pets welcome.
Portland’s Sunday Parkways are already a pretty great idea, when automobile traffic in a designated part of the city is limited so that bikes and pedestrians can take over the streets. The addition of some great Coalition beers makes this Sunday Parkway a special one. Elan Walsky and crew are teaming with their neighbors, Crank Bike Shop, who will be outside the brewery Sunday with a bike tune-up station while the brewery is serving a taplist that includes All Seeing EyePA Session IPA (the Official Velo Cult Bike Beer;) Space Fruit Citrus IPA; Serendipity Summer Session Ale; Roselandia Rose Petal Sour; Sangria Bretta Brett Ale (Collab with Enso Urban Winery;) Hawaii 503, a Pineapple, Passion Fruit, Coconut IPA; King Kitty NW Red Ale; and the release of a brand new beer – Crime of Passion Passion Fruit Sour. 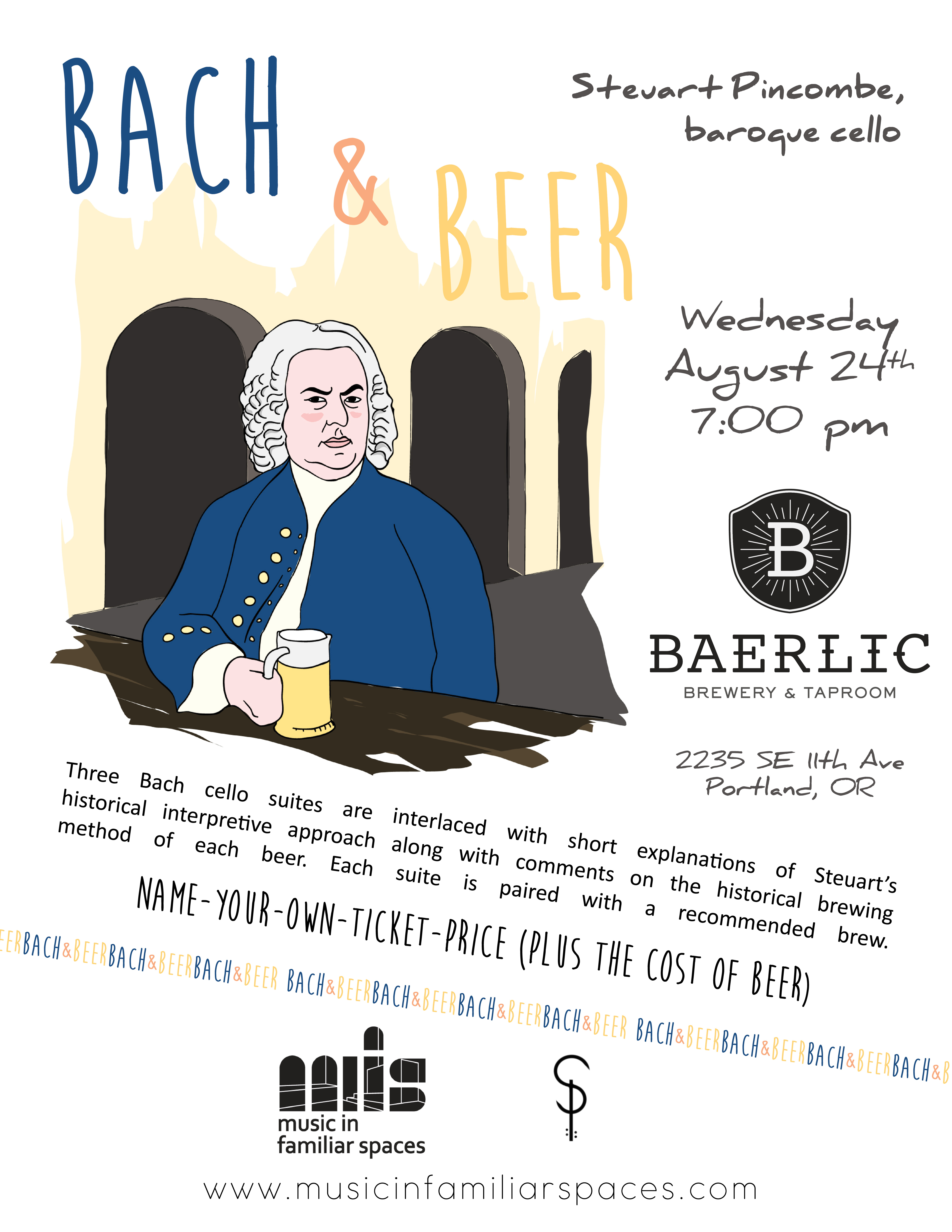 Here’s what the Baerlic folks have to say about the event: Just as many brewers follow a recipe that was used hundreds of years ago, Pincombe’s approach to playing Bach also looks back on old “recipes” and methods of playing. The program of Bach’s Cello Suites will be interspersed with short explanations of Steuart’s historical, interpretive approach along with comments from the brewery on the historical brewing method of each beer. Each of the three suites will be paired with one of Baerlic’s own brews.

The concert is part of a project called Music in Familiar Spaces, a yearlong tour of the US bringing the highest level of classical music performance to homes, churches, cafés, bars, or any place where community already exists. One of the aims of the Music in Familiar Spaces tour is to make classical music accessible to a wide and varied audience by performing in familiar, comfortable and untraditional spaces and by designing programs that invite the audience to experience the music in a new and engaging way. The audience will also be asked to name-their-own-ticket-price, paying what they can afford and what they deem the concert is worth (beer is sold separately). Music in Familiar Spaces was started by Steuart with his wife Michelle and the couple have been on tour since October 2015, living and traveling full-time in a 1959 FAN trailer.

BBQ Wednesdays
6-9 p.m. Wednesday Aug. 24 & 31, Chill n Fill, 5215 N. Lombard St.;
Chill n Fill hosts the Dixon’s Rib Pit crew, who’ll be in the house on August Wednesdays with a BBQ menu of pulled pork, brisket, bbq chicken and St. Louis Style Ribs. Sandwich dinners start at $8, the rib dinner is $15 and depend on it, cold beer will be available.