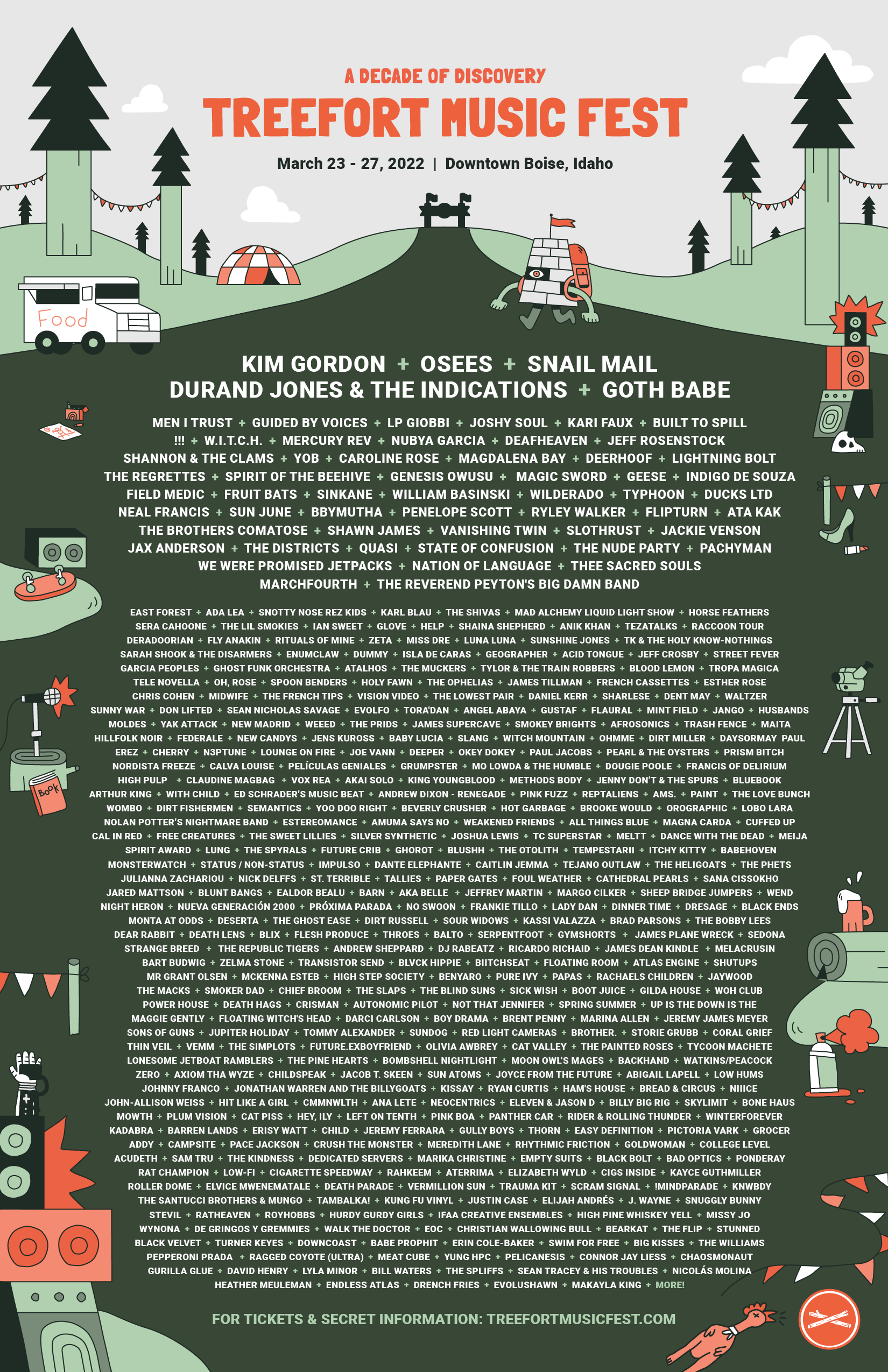 Through its ten-year history, Treefort has went on to become a world-renowned festival that is more than just music. With its humble beginnings of a four-day festival, it has now morphed into a five-day cultural event that has helped revitalize the city of Boise. Treefort even became the first B-Corp certified music festival in 2015.

With each passing year, organizers continued to add many peripheral Forts, ones such as Filmfort, Artfort, Storyfort, Comedyfort, Dragfort, Foodfort, Hackfort, Kidfort, and our favorite, Alefort. It was a way to bring even more people, including families to downtown Boise in late March each year to celebrate the diversity of Boise.

For Treefort 10, over 500 artists hailing from 35 U.S. states and 17 different countries will perform over five days. Yes, the festival has come a long way in just ten years. It even survived the pandemic where it unfortunately had to cancel its event in March 2020 but triumphantly returned in September 2021 with many of the same musical artists but in a much more subdued manner.

“Treefort 10 is shaping up to be our best festival yet. This year’s lineup has more international artists than ever before and so many great local and regional artists as well. Likewise, the forts of Treefort have so many cool and interesting events planned,” said Eric Gilbert, Treefort Music Fest co-founder and festival director. “After a successful September festival, it feels great to bring Treefort Music Fest back in March to celebrate a decade of discovery.”

Treefort 10 Passes are on sale now. Five-day Festival passes are $270, Zipline passes are $420, and U21 passes are $150. Single Day passes are $100, and Main Stage passes are $50. Kids age 12 and under are always free to attend with an adult passholder. Many of the other peripheral ‘Forts are free to attend, including Alefort. For more information and to purchase tickets to Treefort 10, visit treefortmusicfest.com/tickets.

The music lineup for Treefort 10 is quite stellar! Major acts include Kim Gordon, Durand Jones & The Indications, Guided By Voices, Osees, Built to Spill, Mercury Rev, Deafheaven, Men I Trust and so many more! View the full lineup here and take a listen while building your list of must see acts here! Plus, download the Treefort App and start building your schedule, so many fun things to do in Boise!

Musical acts will perform throughout downtown Boise. Beyond the outdoor Main Stage, there will be three additional outdoor stages at Boise Brewing, Payette Brewing, and Lost Grove Brewing. Speaking of the Main Stage, this will be the final year of this stage in the current location as a new development will be taking over this parking lot.

Bands will also be performing indoors at mainstays such as El Korah, The Olympic, Linen Building and Neurolux. A couple of new venues include the Sonic Temple (aka Masonic Temple, located above The District. 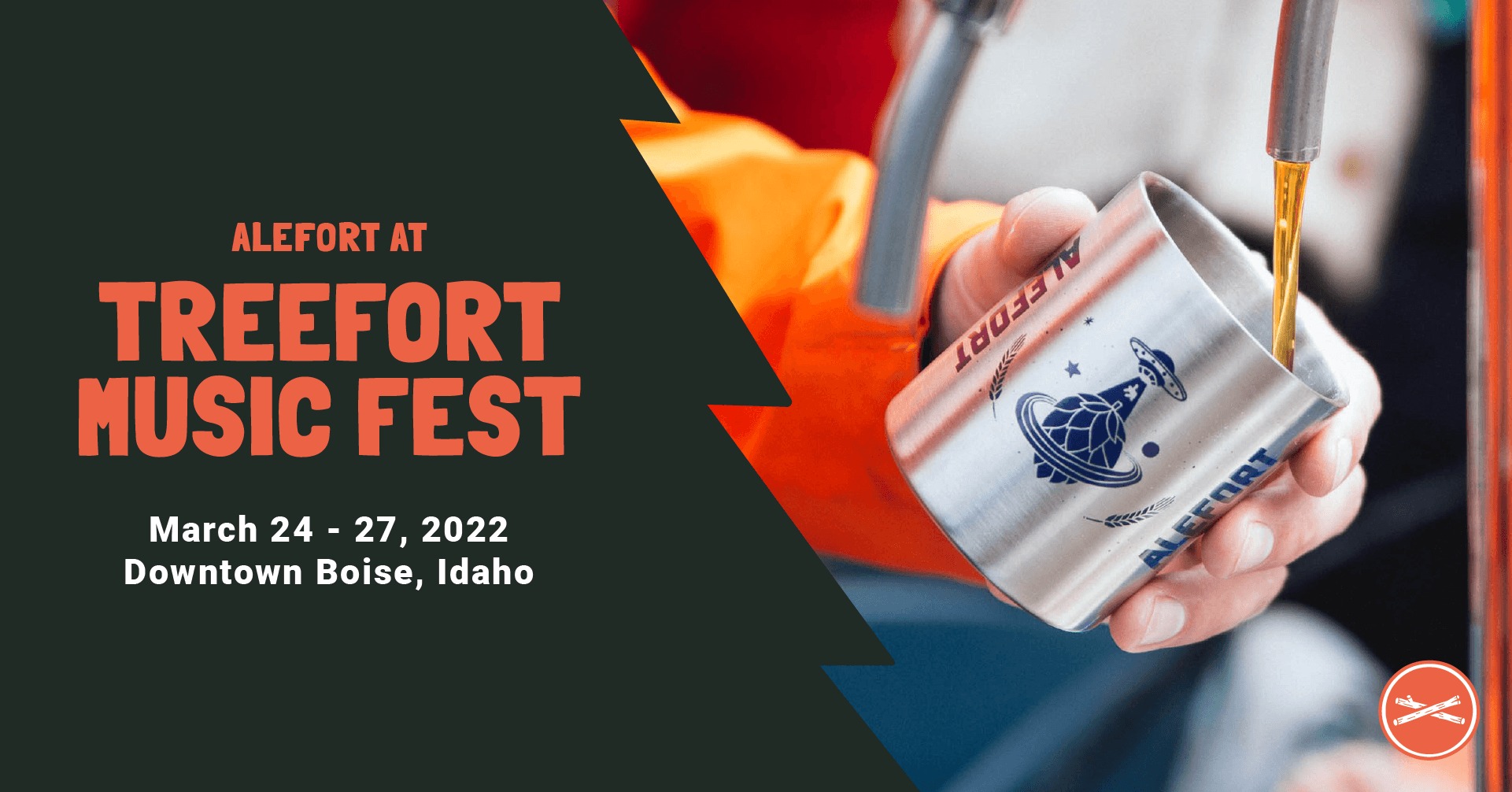 One of our other interests at Treefort is its annual Alefort, the festival’s outdoor beer fest. Taking place over four days, Alefort will open be open on Thursday, March 24 from 4-8pm; Friday, March 25 from 3-8pm; Saturday, March 26 from Noon-8pm; and Sunday, March 27 from Noon-6pm. Entry into Alefort is free and open to the public and all ages this year.

The setup at Alefort will be a bit different this year as it’ll be sectioned into two areas — Alefort Pub and Alefort Lounge — both serving delicious drinks, dishes and drama to discover at Treefort 10. And if you want the quickest access to a beer or cocktail, buzz on by the line with a Buzz Pass! The Buzz Pass includes front of the line access to Alefort, 8 beer tokens, access to private bathrooms, daily secret tastings of rare offerings, and exclusive Alefort and Treefort swag!

Once again, Alefort will fill your 8oz Alefort or 16oz Treefort stainless cup with loads of curated local and regional beers, specialty cocktails, ciders and loads of wine that pair remarkably well with all the music at the fest! If you don’t have one, they’ll be for sale at the fest.

Alefort will be host to a few events including Comedyfort Brunch on Saturday March 26th, Noon-2pm and Dragfort Brunch on Sunday March 27th, Noon-2pm. There will also be some art on display at the Artfort Gallery that beautify the new Alefort Lounge. This gallery will be featuring a variety of visual art across all mediums by Walter Gerard, Sean Ahern, Auberon Design, Heather Tomlinson, Benjamin Hunt, and Animoscillator.

Treefort is more than just music as it’s truly a festival for everyone. Programming includes Artfort, Comedyfort, Dragfort, Filmfort, Foodfort, Hackfort, Kidfort, and Storyfort. Here’s a rundown on what to expect from these peripheral ‘Forts during the 2022 run of Treefort!

ARTFORT is excited to bring performance and visual art to Treefort. In addition to WHYTEBERG, Artfort is excited to have Project Flux, an immersive performance art experience. Bleeding Torch Fellowship will be doing live liquid light shows at a new venue. Tropico FM, Boise’s newest community radio station, will be hosting a showcase featuring local artists Miguel Almieda, Bobby Gaytan, Lupe Galvan, and Air.Theurgy. Artfort worked with Sector 17 to curate an incredible lineup of muralists to create new works around town during Treefort, including Evan Lovett, a conservation based illustrator and muralist based out of Philadelphia. More muralists to be announced soon! Learn more about Artfort at treefortmusicfest.com/artfort-2022-artists.

FILMFORT has added to its initial lineup. “Telos or Bust”, directed by Brad Abrahams, is a pilot film for a series about bizarre folklore that follows the myths and beliefs of citizens of Mount Shasta, California. “Otava”, directed by Lana Bregar, is about an adolescent girl who tries to dream about memories of Mother while having to be physically present in the surrounding farm with grandmother. ”Jethica”, directed by Pete Ohs, tells the story of Jessica, who lives in fear of a man named Kevin that follows her everywhere, and her attempt to get rid of him. ”The Event”, directed by Frank Mosley and Hugo De Sousa, is a short film that answers: It’s 2 AM, and Vince just wants to know why. Filmfort is also screening “W.I.T.C.H.”, a documentary following the 21st Century formation of the band We Intend To Cause Havoc (W.I.T.C.H.), who are performing at Treefort 10 and were Zambia’s most popular rock band of the 1970s. Watch trailers and learn more about the films at treefortmusicfest.com/filmfort-2022.

FOODFORT is bringing in Chef Carlo Lamagna from Portland, OR for a very special Foodfort Tastes seated dinner and more TBA events. Lamagna’s restaurant, Magna, has brought Filipino food into the spotlight in Portland and beyond and Chef Lamagna was named Food & Wine’s 2021 Best New Chef. Foodfort is also bringing in Katy Osuna, host and creator of Copper & Heat, the James Beard Award-winning podcast that addresses the complex social interactions at play in restaurants. Learn more about Chef Carlo Lamagna and Copper & Heat at treefortmusicfest.com/foodfort-2022.

HACKFORT is back to bring all things tech to Treefort. Events to look forward to include: An Introduction to Medicinal Media with Ryan Douglas and Amanda Kruse; Paranormal Pop Culture with Aaron Sagers; Hacking Super Smash Bros workshop with Smash legend Dan Salvato; Hacking Creativity Workshop with Chad Rea; a panel on the Science of Successful Music, Creativity, and the Brain with Dave Rosen, Scott Miles, and Rob Abelow; The dopr Demo with David S. Rosen, Scott Miles, and Rob Abelow; The Future of Streaming Is Now with Chris Longo and Aaron Sagers; Women’s Role In the Progression and Future of STEM with Genevieve Nutting; an animation workshop with Lars C Larsen; telehealth and healthcare in rural communities with AJ Rodriguez and Anson M. Moise and many more! Explore more at treefortmusicfest.com/hackfort-2022-events.

KIDFORT has more music artists than ever before! Angie and Marcus Marianthi of Boise Music Lessons will host a workshop; Red Yarn (aka Andy Furgeson) weaves folksongs and puppetry into high-energy shows for all ages; Triple Rainbow is a dad and daughters band; Cory Strop is a singer-songwriter who writes song for kids; Rosie and Biff make Americana folk-pop for kids. In addition to music, Kidfort has other events including the Summerwind Skippers, a performance and competitive jump rope sports team; Emme Nye, a local mom, artist, and early education advocate; a make your own Treefort accessory workshop; and a flamenco dance workshop with Ballet Folklorico Mexico Lindo. Learn more at treefortmusicfest.com/kidfort-2022-activities.

The upcoming festival will celebrate ten years of Treefort Music Fest, which began in 2012 to showcase Boise’s local music and arts community while playing host to the national and regional music scene. Stay in the loop on all things Treefort Music Fest at treefortmusicfest.com or @treefortfest on social media.