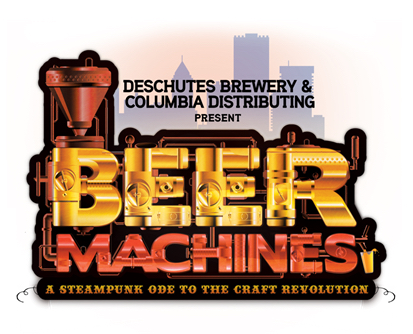 When Oregon goes steampunk, so too must its beer. In this post-apocalyptic future during which steam power has regained mainstream use, the brewing process is re-imagined and realized as an elaborate work of art and mechanics.

Join Columbia Distributing and Deschutes Brewery on Thursday, April 16th at 8:00pm for a memorable evening for Beer Machines: A Steampunk Ode To The Craft Revolution. This night will feature a Beer-Dispensing Art Competition, Immersive Circus Theater and an array of live music. This year’s Craft Brewers Conference (CBC) is in our backyard so it’s only appropriate that we throw a huge warehouse party full of surprises at Pure Space in Northwest Portland.

Come one, come all – over 1,500 are expected to attend! Drink great beer while being mesmerized by a variety of acts:

Steampunk-themed, original art pieces from local artists will not only be showcased and auctioned off, but they will also be dispensing beer, of course! All will be for sale and available to take home (or to your home brewery)! Winner of the best Beer Machine (as voted by party-goers) will take home a grand prize of $5,000.

Tickets are $20 in advance or $25 at the door and can be purchased here. Flash your CBC badge at the event for swag, drink tokens and more!

A portion of proceeds from the event will benefit Salmon-Safe, whose mission is to reduce agriculture’s impacts on endangered salmon and steelhead habitat in the Pacific NW.