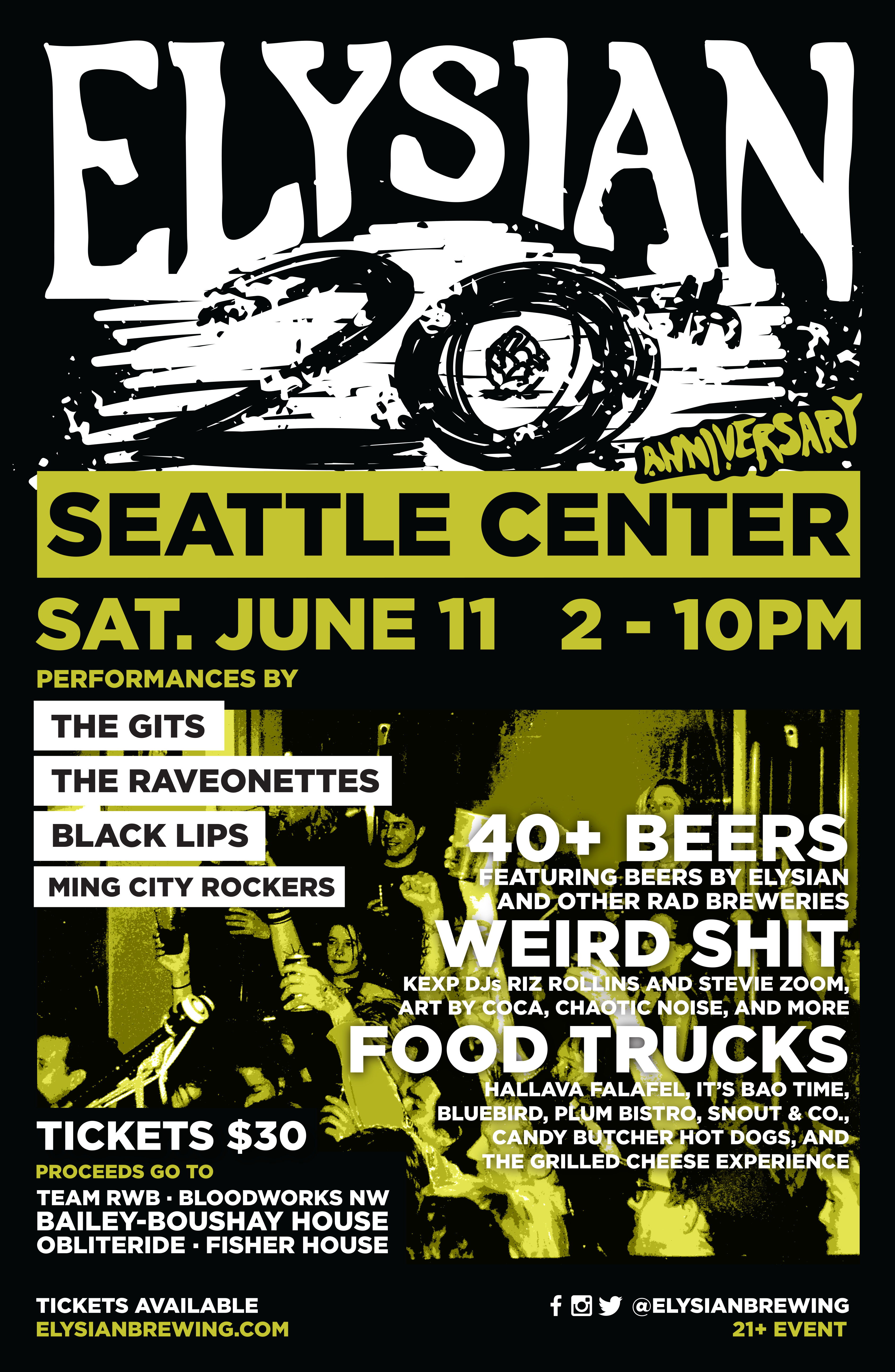 Back in 1996 Elysian Brewing began its brewing operations at its original location in the Capital Hill neighborhood of Seattle. Now 20 years later the brewery that was part of the early Pacific Northwest craft beer movement is set to celebrate with one huge party on Saturday, June 11 under the iconic Space Needle at the Seattle Center. Elysian’s 20th Anniversary celebration will take place from 2:00 to 10:00pm and will feature over 40 beers from Elysian and a few of its brewing friends, live music from The Gits with Rachel Flotard, The Raveonettes, Black Lips, and Ming City Rockers and so much more.

For those keeping track, this is going to be one tremendous day of craft beer in Seattle! June 11th is also the same day as Sierra Nevada Brewing’s traveling Beer Camp Across America Festival that’s taking place from 1:00 to 5:00pm at nearby Lake Union Park.

“This city, its residents, beer lovers and countless local organizations have made Elysian a household name in the Pacific Northwest since we first opened our doors nearly 20 years ago, and we owe so much of our success to them,” wrote Joe Bisacca, founder of Elysian Brewing Company in a news release. “We feel it is our duty, a duty we take with pride, to throw one hell of a party and raise a glass to our fans for their loyalty and support.”

Tickets are now on-sale at $30.00 each with all proceeds going to local charities. Folks 21 years of age or older can purchase tickets at Elysian’s four Seattle locations, including the Capitol Hill Public House, Tangletown, Elysian Fields and Elysian Bar, and at www.elysianbrewing.com.

Elysian’s 20th Anniversary is more than just an amazing concert. Chaotic Noise Marching Corps will fill the air with its wild and eclectic sounds. The twisted and beautiful performers of Apex Aerial Arts will appear. KEXP DJs Riz Rollins and Stevie Zoom will be pumping tunes. The creative minds from the Center of Contemporary Art (CoCA) will showcase art and installations.

Plus on top of this, Elysian plans to feature as many beers as possible, the number of which continues to grow that include the following.

To give back to the community that has given Elysian so much and in the spirit of Elysian’s history and commitment to giving, 100% of the ticket proceeds will be donated to Team RWB, Bloodworks Northwest, Bailey-Boushay House, Fred Hutch’s Obliteride, and the Fisher House Foundation!