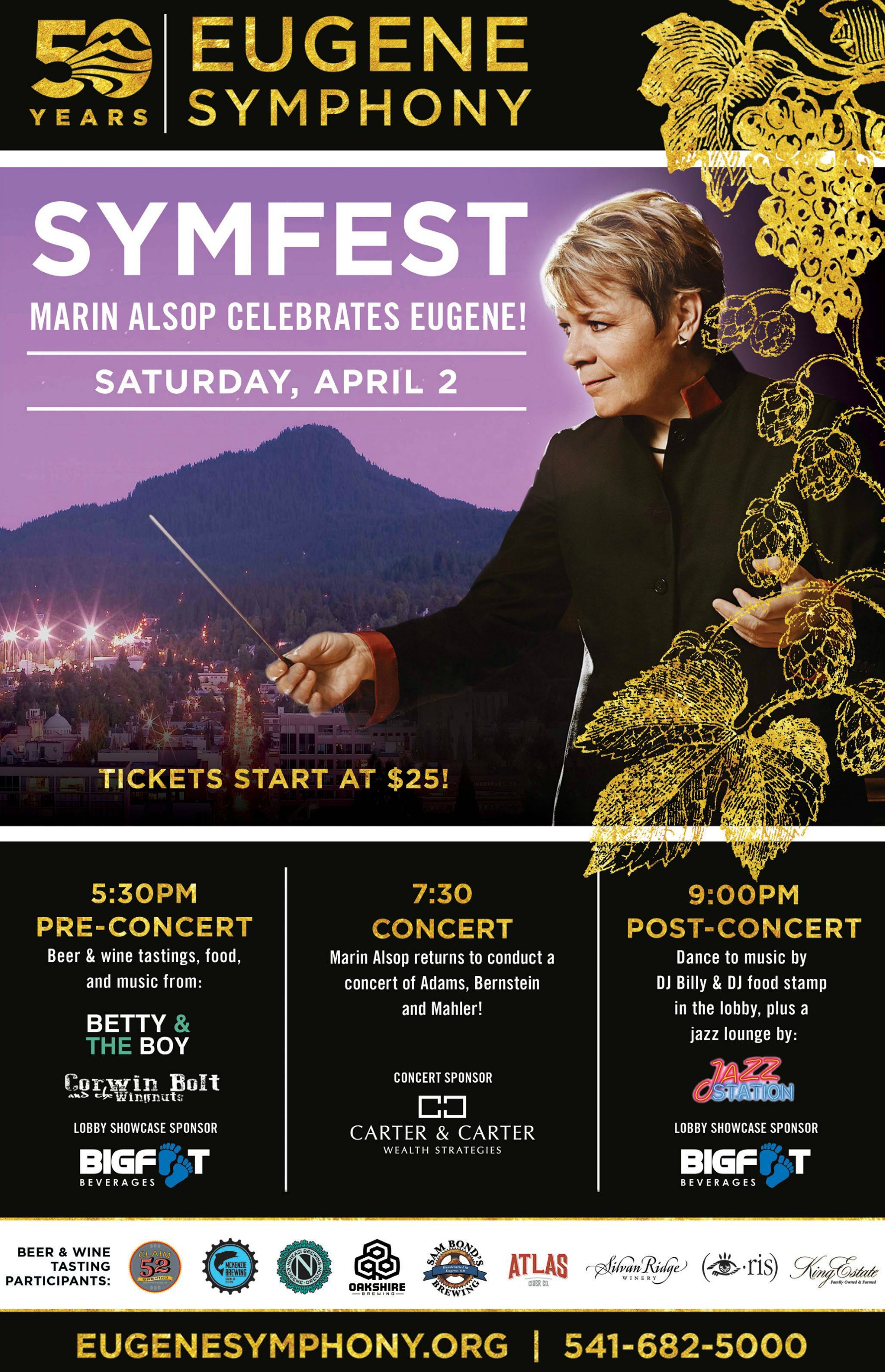 On Saturday, April 2, you may experience sensory overload – in a good way – at Eugene’s Hult Center for the Performing Arts. In a special event of its 50th Anniversary Season, the Eugene Symphony is hosting SymFest, an experiment with the orchestra concert experience. The 7:30 p.m. concert is the centerpiece of an evening-long celebration of Eugene’s vibrant cultural scene – from beer, wine and food carts, to other local arts groups representing a variety of genres from bluegrass and jazz to Javanese drumming, Russian folk and contemporary ballet.

5:30 p.m. Pre-Concert Activities – Food, drink, music and more
The celebration begins with wine, beer, and cider tastings in the Hult Center Lobby, while Bluegrass bands Betty and the Boy and Corwin Bolt & The Wingnuts entertain.

Here’s the beer and cider that will be pouring –

When hunger strikes, take your pick from the wide offerings of two food carts, Kun Fusion and Sammitch, that will be parked outside on the concourse between the Hult Center and the Hilton.

Additionally, the pre-concert festivities stretch into the smaller cabaret style theater of the Hult Center, Soreng Theater, where you can enjoy a showcase of Eugene arts groups, hosted by Eugene Symphony Principal Timpanist Ian Kerr.

7:30 p.m. Concert featuring Adams, Bernstein, Mahler & Johnson
The concert itself is also worth noting, even for those who may not consider themselves fans of orchestral music. Leading the orchestra will be Conductor Laureate and former Eugene Symphony Music Director Marin Alsop, who began her conducting career in Eugene from 1989 until 1996 and is now revered worldwide for her bold creativity and leadership, especially as a female in a male-dominated field.

The first piece to open the concert is a quick one, coming in at just over 4 minutes. “Short Ride in a Fast Machine” by living American composer John Adams evokes a thrill ride on a motorcycle. Then, Alsop turns her baton to the lush Adagio from Austrian composer Gustav Mahler’s unfinished Symphony No. 10. After that, you’ll hear Leonard Bernstein’s music from the 1954 Academy Award winning film On the Waterfront starring Marlon Brando, which uses eloquent horn themes and prominent percussion to show a gritty portrait of life in New Jersey. The concert ends swinging with Victory Stride, a vigorous foot-tapper by American jazz pianist and composer James P. Johnson.

9:00 p.m. Post-Concert Activities – DJs, dancing, and a jazz lounge
After the concert, DJ Billy & DJ Food Stamp provide music for you to spin to on the dancefloor in the lobby. Beer, cider and wine from the companies sampling before the concert will be available for purchase.

Plus, The Jazz Station will take over Soreng Theater, making it a jazz lounge to round out the showcase of Eugene’s dynamic cultural landscape.

This is not your grandma’s typical symphonic concert or your run-of-the-mill beer fest. This is art to indulge every one of your senses.

Tickets start at $25 and are available on Eugene Symphony’s website.

Brian first discovered his love for all things craft beer while studying chemistry at the University of Oregon surrounded by budding craft breweries like Ninkasi, Oakshire, and Hop Valley. During his last year at the UO, he convinced his advisor to let him work with Oakshire Brewing to start a basic QA lab. After graduation Brian took a temporary hiatus from the craft beer industry to work in Detroit on automotive fuels and lubricant technology research for the US Army. But as soon as he heard Oakshire was ready to hire a full-time QA/QC position, he hurried back to Oregon and craft beer. Under the direction of then brewmaster Matt Van Wyk, he worked as Oakshire’s QA/QC Manager for nearly two years. This experience fueled his passion for the wild and barrel-aged brewing process. He left his QA.QC role at Oakshire to to further his understanding of fermentation, and more importantly barrel aging working at King Estate Winery as a cellarman. In January of 2016 Brian, along with his brother Doug and friend Matt Van Wyk, quit his day job and focused 100% of his efforts toward opening a barrel focused craft brewery in Eugene, Alesong Brewing and Blending.