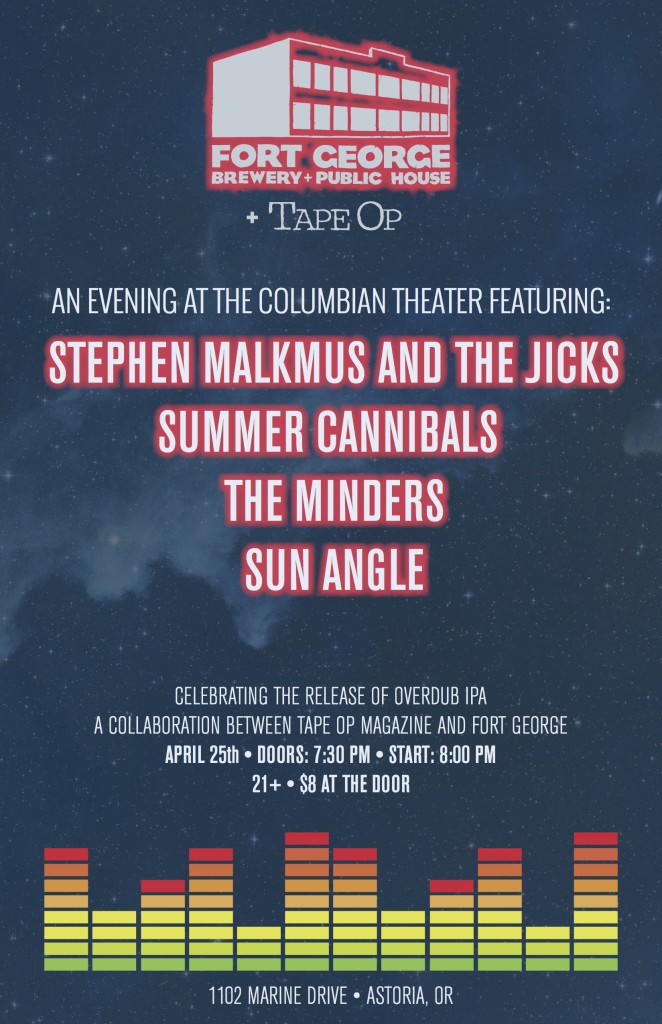 Fort George Brewery has teamed up with Tape Op Magazine to bring another 16oz can release that blends golden suds and music. Overdub IPA is a session IPA that will keep one at bay until the 2015 edition of 3-Way IPA that will be brewed with pFriem Family Brewers and Georgetown Brewing is released around Memorial Day.

Overdub IPA is ready to roll starting April 23rd wherever Fort George beer is sold. But the release out in Astoria sounds killer that will feature Stephen Malkmus and the Jicks at Columbian Theater in downtown Astoria on Saturday, April 25th. At only $8 this is a seal of a show!

This session IPA will appear from time to time throughout the year. The first blast will be a short run, so get it while you can.

the sound of Overdub IPA
A good beer is like a good sound recording, balanced and pristine. Soft and subdued when it needs to be – In your face and crankin’ when it must. Done right, there’s nothing better than critical listening with a cold pint in your hand. Fort George invites you to put on your headphones and sample a can of Overdub IPA, their newest 16-oz collaboration with Tape Op, the creative music recording magazine. Pouring a solid gold with a crisp white head, Overdub IPA is a sensory overload of mango and papaya hop aromas, dank grapefruit tones, and mellow citrus finishing notes. This session-style IPA turns down the ABV, and engages the lupulin intensity toggle switch.

release parties
Join Fort George and Tape Op Saturday, April 18th at Bottles in Portland for the first chance at an Overdub IPA. Larry Crane of Tape Op and the folks from Fort George will be there with plenty of Overdub IPA, as well as some other Fort George favorites.

Then get yourself to the Columbian Theater in historic downtown Astoria on Saturday, April 25th for a full show of authentic Portland rock and roll. Tape Op and Fort George collide for a night of live music featuring:

The Minders – Formed in Denver, Colorado by Martyn Leaper and Robert Schneider (Apples in Stereo) – these rockers promise a bold, lush statement laden with hooks.

There are no pre-sale tickets, so arrive early – $8 cash only at the door starting at 7:00pm.

about Tape Op
Tape Op began in 1996 by a then-novice recording engineer named Larry Crane. The first print run was about 500 Xeroxed copies, which Larry distributed among his friends. Between digital and print, Tape Op now sends out close to 70,000 magazines to a diverse worldwide audience, from home recordists to working professionals and everything in-between.

Tape Op is about learning how to make great recordings with whatever tools you have access to. It’s about education and creativity. Unlike most recording magazines, the primary focus is not reviewing equipment, but a discussion about making art. If you’re serious about sound, go to www.tapeop.com.

about Fort George
Locally owned and operated in historic downtown Astoria, Oregon, Fort George crafts original beers available only in the Pacific Northwest. Whether in cans or kegs, at the pub or on your front porch, Fort George beer brings people together in aromatic headiness and lupulin ecstasy. For more information about Fort George, go to www.fortgeorgebrewery.com or follow them on Twitter, Instagram, and Snapchat @FortGeorgeBeer.

about Overdub IPA
Look for Overdub IPA in grippy 16-oz four-packs and draft starting April 23rd, and from time to time throughout the year. Fort George beer is distributed only in the Pacific Northwest. For a location near you, check the beer finder at www.fortgeorgebrewery.com/beerfinder/.