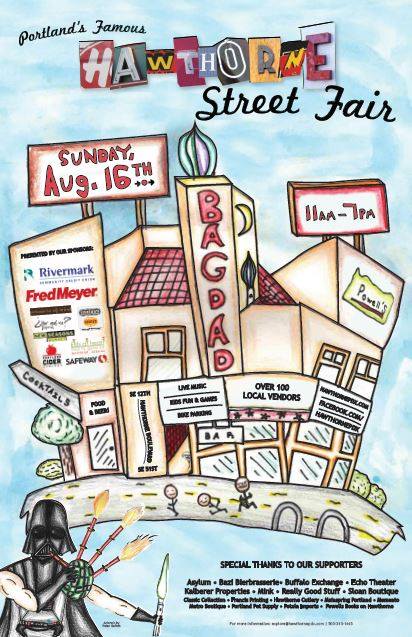 The annual Hawthorne Street Fair Returns on August 16 from 11:00am to 7:00pm and will feature the return of The Mighty Mites Session Beer Fest to Bazi Bierbrasserie for its third consecutive year.

This is an excellent day to come visit Portland’s original “shop local” district to explore over a hundred businesses dedicated to community involvement, making the area a desirable place to live, work, and shop.

Some of the Hawthorne Street Fair highlights include:

Hawthorne Boulevard will once again be closed to traffic from Cesar Chavez to SE 30th Avenue. It is encouraged to take TriMet or bicycle to the street fair. There will be bicycle parking is at each end and at several bike corrals in the area.

An outstanding line up of food and product vendors, community service providers and many of the businesses with storefronts on Hawthorne will be out on the Boulevard, too! We really enjoy slowing things down so our neighbors and friends can check out new brick and mortar businesses as well as food carts, visiting vendors and street event food items!

For fans of McMenamins, its Bagdad Theater will host a History presentation revived for the Street Fair from 11:00am to 1:00pm.

Also taking place during the Hawthorne Street Fair is the Grand Opening of the new neighborhood, backyard production brewery of Leikam Brewing. Earlier this year a new brewery founded by Theo and Sonia Marie Leikam opened its doors in Southeast Portland. Leikam Brewing is unique as a certified kosher, community-supported nanobrewery. Now with the 5-barrel brewery in full production, Leikam Brewing is set to host its official Grand Opening Celebration during the Hawthorne Street Fair. The celebration will be on Sunday, August 16 from 11 AM – 7 PM at Growlers Hawthorne on 34th and Hawthorne.

The opening will feature 4 of the couple’s beers including 2 of its flagships, the Shoreline Pale and the Janis Hoplin IPA. The other beers featured will include the Funky Town Apricot Ale and a limited edition double IPA. There will also be live music, giveaways and lots of fun for all. 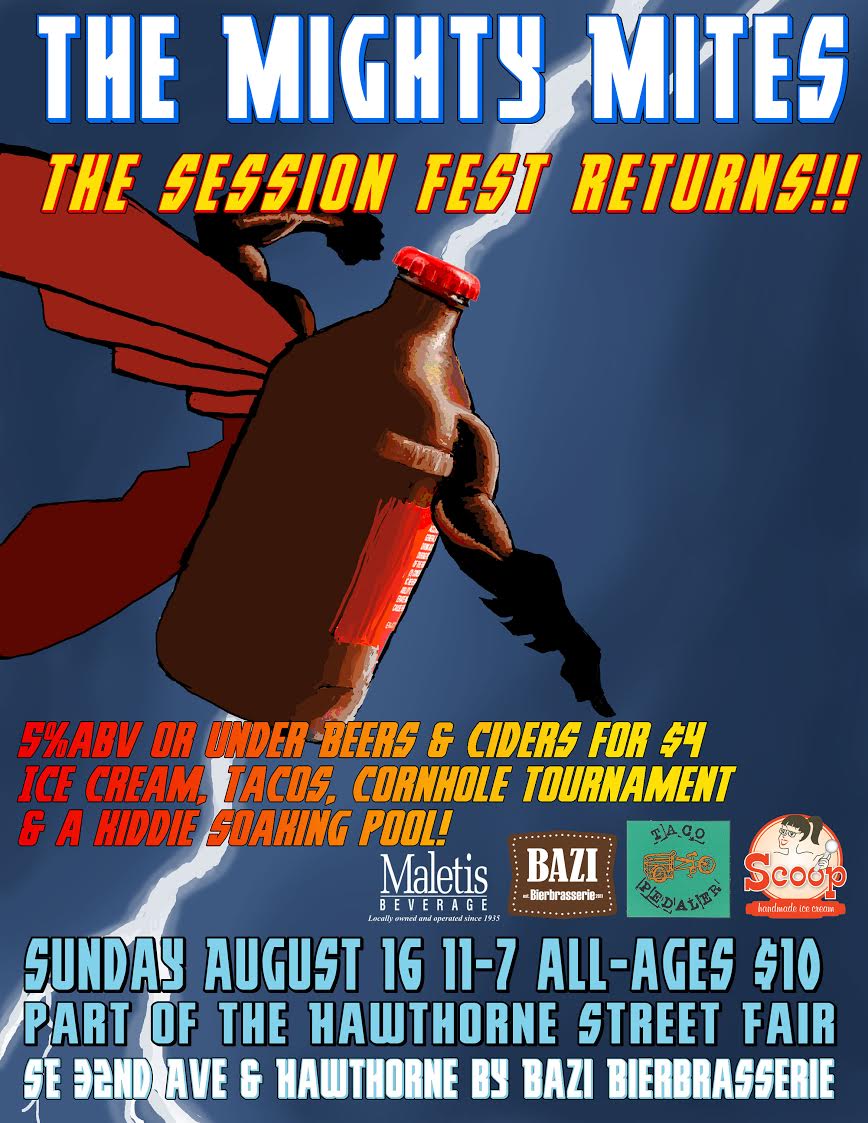 For the third year in a row The Mighty Mites Beer Fest returns as part of the Hawthorne Street Fair festivities outside Bazi Bierbrasserie (1522 SE 32nd Ave) on Sunday, August 16 11:00am to 7:00pm.

The Mighty Mites Beer Fest features an array of beers and ciders all considered to be lighter, sessionable beers that fall under the “Session” style category as defined by being 5% ABV or below. The Mighty Mites presents a selection as varied as they are flavorful from session IPAs to tart refreshing Berliner-Weisse, Ciders, and even a couple straight from the can.

The tap and can list includes a variety of beers and ciders, all 5% ABV or under.

Beer and cider tasting is $10 for a cup and four tickets each good for a large 7 oz beer or cider tasters and two tickets for a full cup. Additional tickets are $2 each. Individual cans of Firestone Walker Easy Jack and Breakside Post Time Kolsch are only $4 each!

Outside in the beer garden, this family friendly event features Scoop Ice Cream and food from the Taco Pedaler. To keep the party going DJ Phil will be spinning World Music. There will also be outdoor games like Cornhole and a kiddie soaking pool to dip your toes into!

At the bar, Bazi has created a special (non-sessionable) beer cocktail for the occasion dubbed the Shandy Mighty for $5, it contains gin, honey, coriander syrup, egg white, and Hefe Shandy served on the rocks. There will also be a full menu available inside Bazi with Happy Hour specials on food and drinks all day!