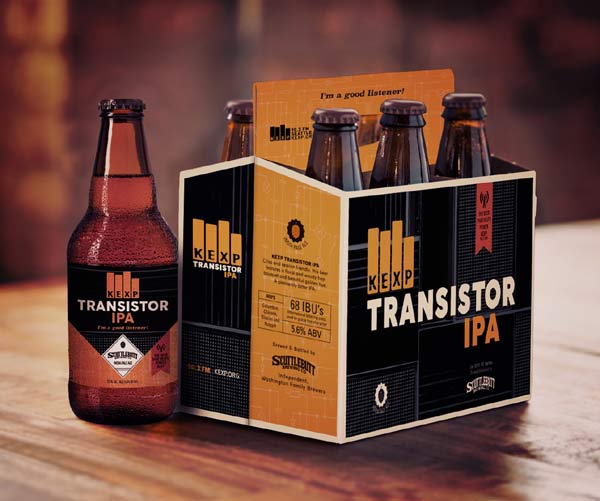 One of the best radio stations in all of the land, KEXP is in the process of relocating its studios to a new spot in the Seattle Center, a few blocks west of its current location. To make this move the non-profit radio station is raising funds and has teamed up with Scuttlebutt Brewing Company of Everett, WA to launch Transistor IPA. All net proceeds from the sale of Transistor IPA will benefit KEXP’s New Home capital campaign.

Today is when Transistor IPA is officially released and for those in Seattle there will be a launch party at Moe Bar on Capitol Hill from 5:00 to 7:00 p.m., unveiling the first official tasting of Transistor IPA. KEXP Morning Show host John Richards will be at the launch along with member from Scuttlebutt Brewing.

Transistor IPA will hit grocery stores shelves in six packs and can be found around the state of Washington on tap at popular restaurants, clubs, bottle shops and in the Scuttlebutt Brewing tasting room. Hopefully this beer makes its way down to Vancouver, WA!

“We are very excited to work with Scuttlebutt,” said KEXP Morning Show host John Richards. “They are a local, family run, family owned brewery who makes great beer, and we are a Seattle based radio station run by the community, for the community – it couldn’t be a better pair. We are grateful for this partnership and can’t wait to share this delicious beer with the city.”

Scuttlebutt is a respected pioneer of the burgeoning Northwest craft beer scene. Founded in 1996 in Everett, Scuttlebutt is a family owned and operated brewery with an ever growing product line – producing 20 styles of hand-crafted ales over the past 19 years.

“KEXP has been enriching lives in our community for a long time,” said Scuttlebutt founder Phil Bannan Sr., “and we are thrilled to be able to support their evolution into an even more public facing arts organization.”

Transistor IPA is a crisp and session-friendly brew, with floral and woody hop notes and a beautiful golden hue. It is brewed with the Northwest’s finest ingredients including: barley from Vancouver (WA); Columbus, Chinook, Glacier and Nugget hops from Yakima Valley (WA); yeast from Odell (OR); and some of the nation’s finest drinking water from the Spada Reservoir in the Cascade Mountains.

The label and packaging for Transistor IPA were designed by Dave Narcizo, co-founder of Lakuna Design and drummer for Throwing Muses. Narcizo joined Throwing Muses in 1983 and has been an active voice on the rock music scene ever since. 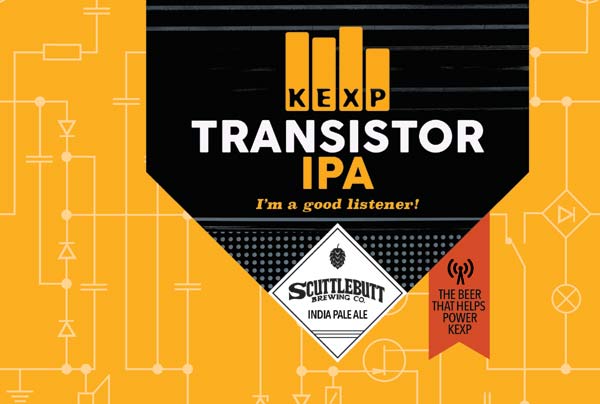 “KEXP has always felt like a station where real fans and musicians can truly embrace the music business, and not succumb to the quality-crushing constraints that plague their corporate-sponsored peers,” says Narcizo. “Like music, design is full of goodness, hard work, surprises, and blank-page potential. Package design is a newer piece of our services at Lakuna Design, and when we got the opportunity to work with KEXP and Scuttlebutt, it seemed like a perfect match of skills and interest,” adds Narcizo.