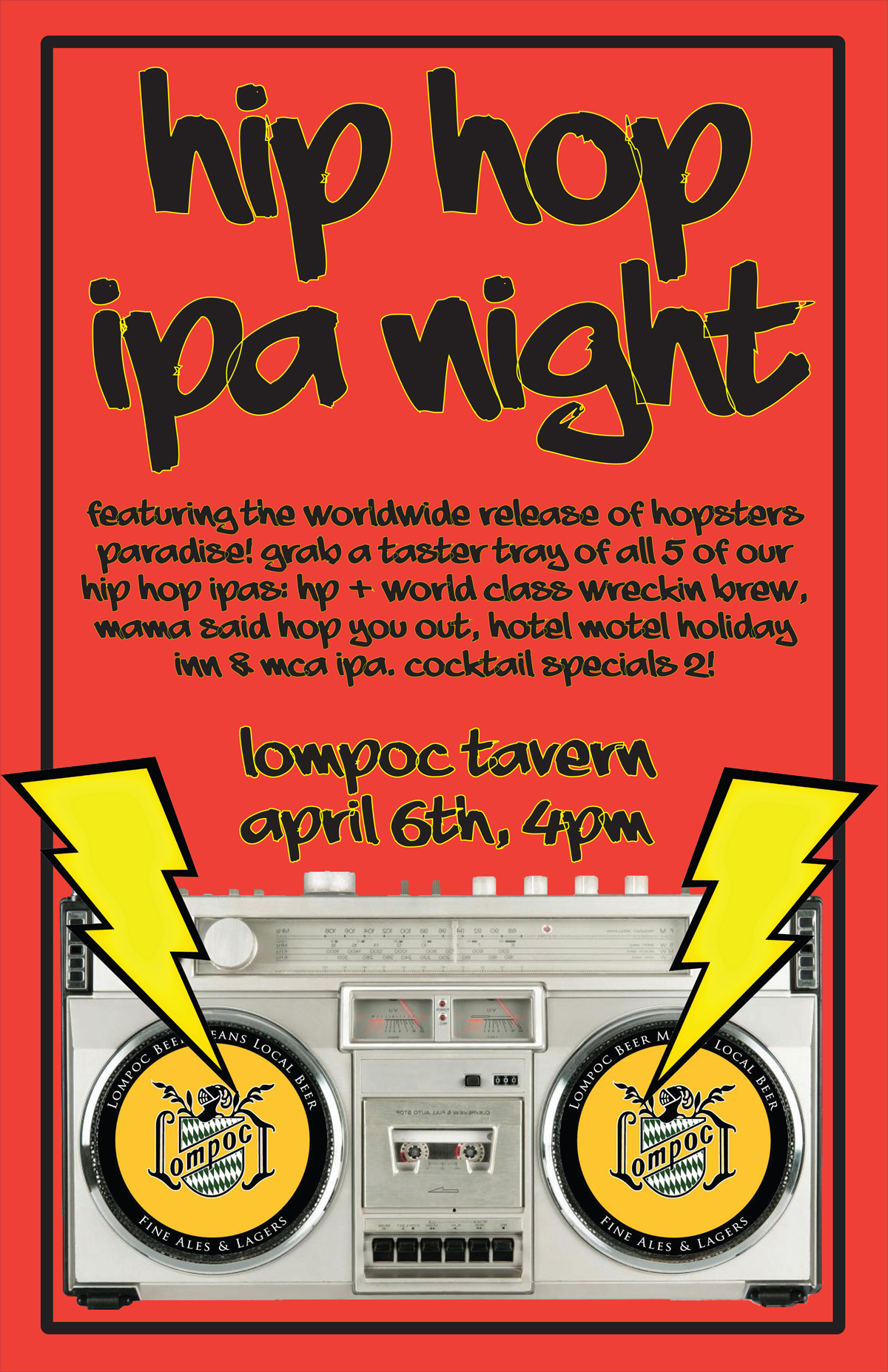 Over the past couple of years Lompoc Brewing has been brewing a lineup of themed beers. Some of these past themes have included, baseball, classic rock, science fiction, spies and now hip hop music. “If someone suggests a them and it sounds like fun, we’ll do it!” stated Bryan Keilty in a press release.

Here’s a beer list and descriptions on each of the five beers provided by Lompoc Brewing.

World Class Wreckin Brew: Brewed in collaboration with Willamette Week writers Martin Cizmar and Parker Hall, this is the 1st in Lompoc’s Hip Hop series of IPAs. Pale orange in color with a strong tropical fruit aroma with hints of fresh lime zest. Hopped with Simcoe, Huell Melon and Mandarina Bavaria, then aged in a brite tank on mango puree. This fruity IPA finishes dry and packs a punch, much like Dr Dre this will blow your mind. Calling Dr Dre to surgery….6.3% ABV

Mama Said Hop You Out: The 2nd in the Hip Hop series, this IPA packs a punch, with additions of Nugget, CTZ, Hull Melon, Mandarina Bavaria, Wakatu hops and a subtle malty balance. Tropical fruit, citrus and earthy notes hit you in the face and will keep you coming back the next time round.  6.3% ABV

Hotel Motel Holiday Inn: The 3rd in the Hip Hop IPA series has a copper-orange hue. Brewed with nine different hop varieties, there is a chalky aroma with flavors of orange and apricot, finishing very smooth. 5.6% ABV

MCA IPA: The 4th in the Hip Hop series of IPAs is a collaboration with Lompoc bartender Cody Bottorf. Nugget, Cascade and Galaxy hops give this copper colored IPA aromas of pine, tropical fruit and citrus.  6.2% ABV

Hopster’s Paradise: Brewed in collaboration with former Lompoc brewer Josh Merrick, this is the 5th in the Hip Hop series of IPAs. Copper to orange in hue and hopped with five different hop varietals, this beer gives off a flowery, citrus aroma. A resiny flavor with hints of pine and tangerine mingle on the tongue. 6.0% ABV

All five Hip Hop IPAs will be available by the pint or as part of a Hip Hop IPA taster tray. Lompoc will also have a Gin & Juice cocktail special featuring its neighboring distillery, Aria Portland Dry Gin.