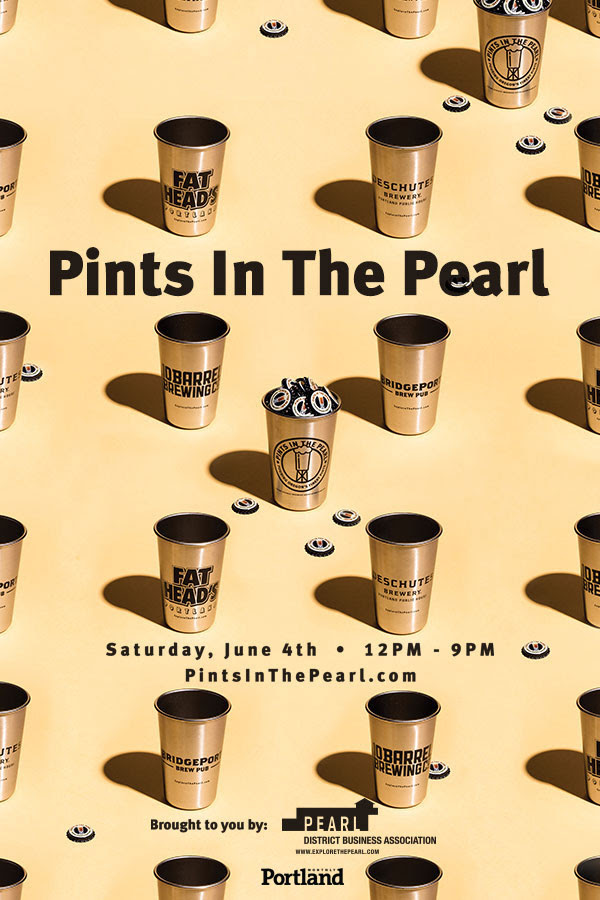 Pints In The Pearl will take place on Saturday, June 4 from Noon to 9:00pm. This block party will take place on NW 13th Avenue, south of NW Everett and NW Couch, as it will be closed down to traffic, as the avenue will be transformed into a family friendly space for the day. Each brewery will feature a beer brewed just for Pints In The Pearl along with a few other selections from each brewery. There will also be food pairings for the beers to make this an even better experience. Plus brewers will be in each of the brewery’s booths so that attendees will be able to learn more about each beer from the creators.

“We want to make this an annual event that will grow each year,” mentioned Carolyn Ciolkosz, director of the Pearl District Business Association during a recent festival preview. “This is a way to drive people to our district. Our neighborhood has such a strong history of craft brewing that carries through the present with its award-wining breweries. We are looking forward to bringing them all together to celebrate what makes the Pearl District so special.”

In addition to beer and food tasting, Pints in the Pearl will feature family friendly entertainment ranging from cornhole to live music by bands that include The Weather Machine and local American Idol contestant Haley Johnson. To make the block party more inviting, organizers will be bringing in sod or an artificial turf to lay down in the table and game area. The event is open to all ages and will be mc’d by local personality, Poison Waters.

Here’s a rundown on what each of the four breweries will be pouring and its accompanying food options.

According to BridgePort’s Christian Engstrom, the brewery’s Pints In The Pearl beer, Pearl-iner Weisse, is the very first tart beer that BridgePort brewed. “We’ve never done a sour beer before. It’s low in alcohol at only 4% ABV,” mentioned Engstrom at a recent festival preview. BridgePort will also allow the option of adding woodruff or raspberry flavored syrups to the slightly tart beer. However from our recent tasting we feel that there is no need to add either as this is a fine example of a traditional Berliner-Weisse beer as it offers a very subtle tartness that will be perfect for the upcoming warm spell that will be taking place this upcoming weekend.

Deschutes decided to brew a saison for the Pints In The Pearl. And when it came to naming the beer, “Why not name it after the fountain that Weinhard wanted to plumb with beer,” joked Ben Kehs, head brewer Deschutes Brewery’s Portland pub. “I love El Dorado hops and wanted to brew something light, 6% ABV.” The result is a farmhouse saison that offers up notes of melon.

CitraPhonic IPA is the beer that Fat Head’s brewed for this weekend’s festival. “It’s a sing hop Citra beer. Its our first sing hop beer that we have ever brewed here in Portland,” stated Fat Head’s Tom Cook at a recent festival preview. Unfortunately this beer was not ready at the preview but if its like any other IPA that Mike Hunsaker brews, we’re sure hopheads will rejoice.

“I decided to brew something easy drinking and approachable for Pints In The Pearl,” declared Whitney Burnside, 10 Barrel Portland Brewmaster. “This beer uses 6 row and a corn malt bill.” As with many of the recent lagers that we have consumed at the local 10 Barrel, this one two holds up to the solid reputation that has developed from the beers produced here over the past year.

Admission is $20, which includes a limited edition Kleen Kanteen 16 oz. stainless steel pint cup ($9.95 value) and three tokens, each valued at $5.00. Each token is good for either one 16 oz beer or one food item. Additional tokens may be purchased at $5.00 each. Tickets are available in advance at www.PintsInThePearl.com or at the door. Strangely on the day of the event organizers will not be accepting cash, as only credit and debit cards are accepted.

Stay up to date on the happenings at Pints In The Pearl by following the events Facebook, Twitter, and Instagram pages. Make sure to use the hashtag #PINTS.