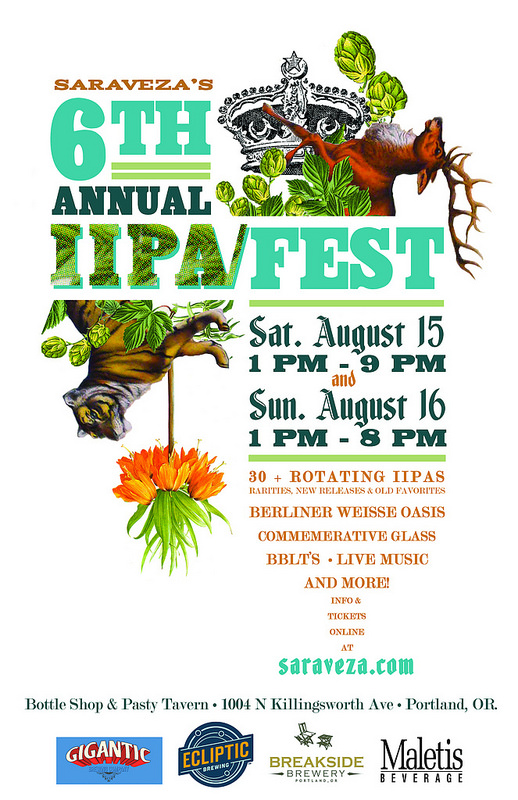 This weekend looks to be a stacked one with various beer events around town and North Portland will be no exception when the 6th Annual IIPA Festival returns to Saraveza Bottle Shop & Pasty Tavern and The Bad Habit Room on August 15-16. This fest will already be joining the 11th Annual North American Organic Brewers Festival that will already be in progress from August 13-16 at Overlook Park also in North Portland and just a short 30 minute walk away.

This year’s edition of Saraveza’s IIPA Fest will feature over 45 rotating Double & Some Triple IPAs served alongside some tasty Double Bacon BLTs. Also returning this year from its humble beginnings as a Hamm’s Oasis is the popular Berliner Weisse Oasis taht will feature 6 rotating tart, lower ABV refreshers. There will also be live music to keep a lively atmosphere going that’ll feature Flat Rock Stringband, Voodoo Voltage and the Bad Habit Room’s very own, Rob Bonds.

Mic Drop is the official IIPA of this year’s fest and was brewed at Breakside Brewery’s original Dekum location under the guidance of Jacob Leonard, Director of Brewery Operations. This brew marks Saraveza’s 5th Collaboration brew with Breakside.  Mic Drop is a hop bomb with Equinox, Chinook & Simcoes added in the boil and is double dry-hopped with Simcoe & Amarillos.  Mics will be dropped! 8.4% ABV, 75 IBUs.

The entrance fee to the festival is $20 that includes a commemorative IIPA Festival glass and 10 drink tickets good for a 4oz sample of beer (some beers are more expensive and cost 2 tickets per sample). Advanced ticket purchase is encouraged here.

Parking and Public Transportation options include the first come, first serve off-street parking available in PCC Cascade Parking Lots C & D, on either side of the Telephone Exchange Building, located at 1011 N. Killingsworth Street, directly across from Saraveza during festival hours.

Since there will be some big beers being served its recommended to take TriMet to Saraveza. The TriMet #72 & #4 bus lines run right to the Festival/Saraveza and the MAX Yellow line N. Killingsworth stop is just a few blocks away.

For more up to date information R.S.V.P. to our Facebook Event Page and be sure to follow the event with the #IIPAFest hashtag.