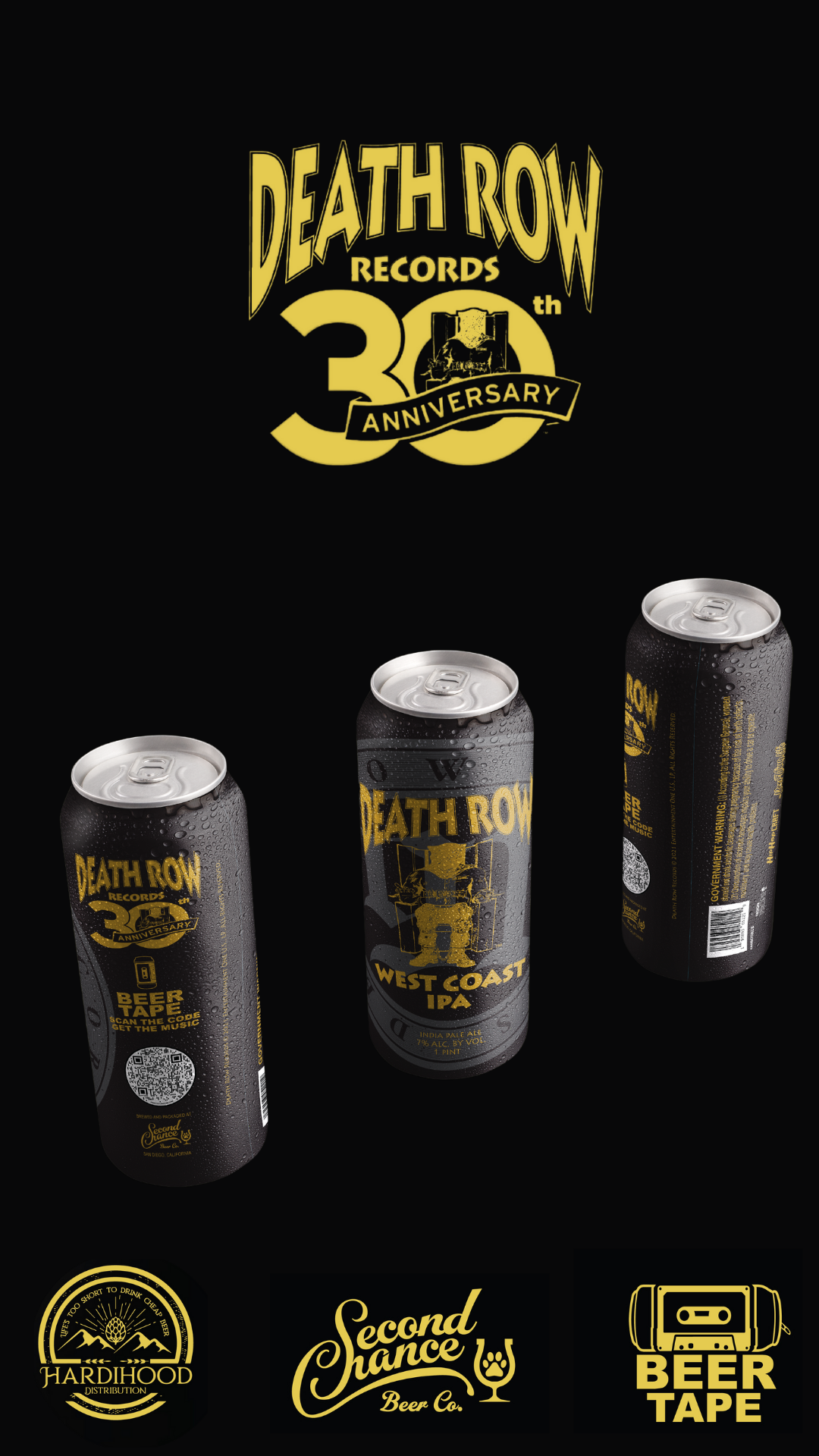 Death Row West Coast IPA pays tribute to the 30th Anniversary of Death Row Records in 2022. Second Chance was selected as the exclusive California brewer of the beer and is now available at its locations in Southern California.

Second Chance Brewing was founded in September 2015 by Marty Mendiola and Virginia Morrison. The San Diego-based, award-winning craft brewery has a brewery and tasting room in Carmel Mountain Ranch and a coffee, beer lounge, and tasting room in North Park.

The commemorative beer for Death Row’s 30th Anniversary is the creation of Edgar Preciado of Beer Thug Life and Daniel Phoenix of Hip Hop Craft, who selected Second Chance to brew the second release of the beer. Both Preciado and Phoenix have been closely involved with the beer’s production, including recipe creation, brewing, and packaging. The Death Row West Coast IPA cans have a QR code that allows the consumer to download exclusive content and music from Death Row Records.

Death Row West Coast IPA is a full-bodied beer with notes of citrus, pine, and grapefruit. The 7.0% ABV West Coast IPA will initially be available exclusively at Second Chance’s Carmel Mountain tasting room and North Park lounge. Retail outlets that will carry the beer will be announced on a later date.

“We are incredibly honored to have been chosen to produce this beer for such a monumental anniversary of such a monumental record label in the music industry,” said Second Chance co-founder and CEO Virginia Morrison. “I loved Death Row Records’ music growing up, and it’s even more exciting now that Snoop Dogg owns the company. I’m still pinching myself because this is a dream come true that I never could have imagined.”

Death Row Records was founded by Dr. Dre and Marion “Suge” Knight. Its first full-length project was Dr. Dre’s The Chronic, which sold more than three million copies within a year of its December 15, 1992 release and earned a spot on Rolling Stone’s 500 Greatest Albums of All-Time list and Timemagazine’s 100 Greatest Albums of All Time. Also of note, Dr. Dre’s protégé Snoop Dogg released his debut single “Who Am I (What’s My Name)” in October 1993 on the label. Snoop Dogg purchased Death Row Records in February of this year.

Second Chance donates a portion of sales, including from Death Row West Coast IPA, to local dog rescues such as The Animal Pad and Second Chance Dog Rescue, as well as Friends for Life Animal Rescue in Gilbert, Arizona. Like Second Chance Beer Company, both non-profit organizations are dedicated to saving homeless dogs and giving them a second chance at life.

A release party will be held in San Diego on Sunday, August 7. More details are forthcoming.