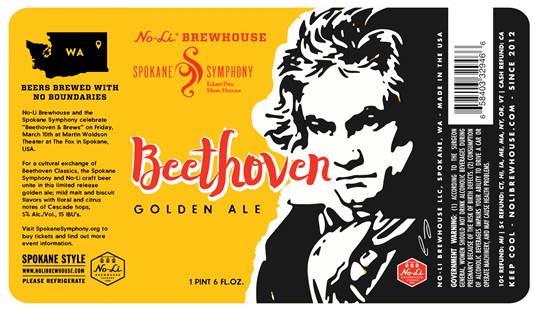 When Spokane’s largest brewery, No-Li Brewhouse, and the city’s Spokane Symphony partner together on a beer, the end result is Beethoven Golden Ale. This new symphony inspired beer is being released in time for the upcoming Beethoven and Brews featuring Jorge Luis Uzcategui, Conductor. The performance will be held on Friday, March 10th in The Martin Woldson Theater At The Fox Theatre.

“We are pleased to present an evening of Beethoven with a special brew made just for the occasion,” stated Lynda Sanders, Director of Marketing & Sales for Spokane Symphony in a news release.

Ticket Information can be obtained by calling (509) 624-1200 or checking out SpokaneSymphony.org