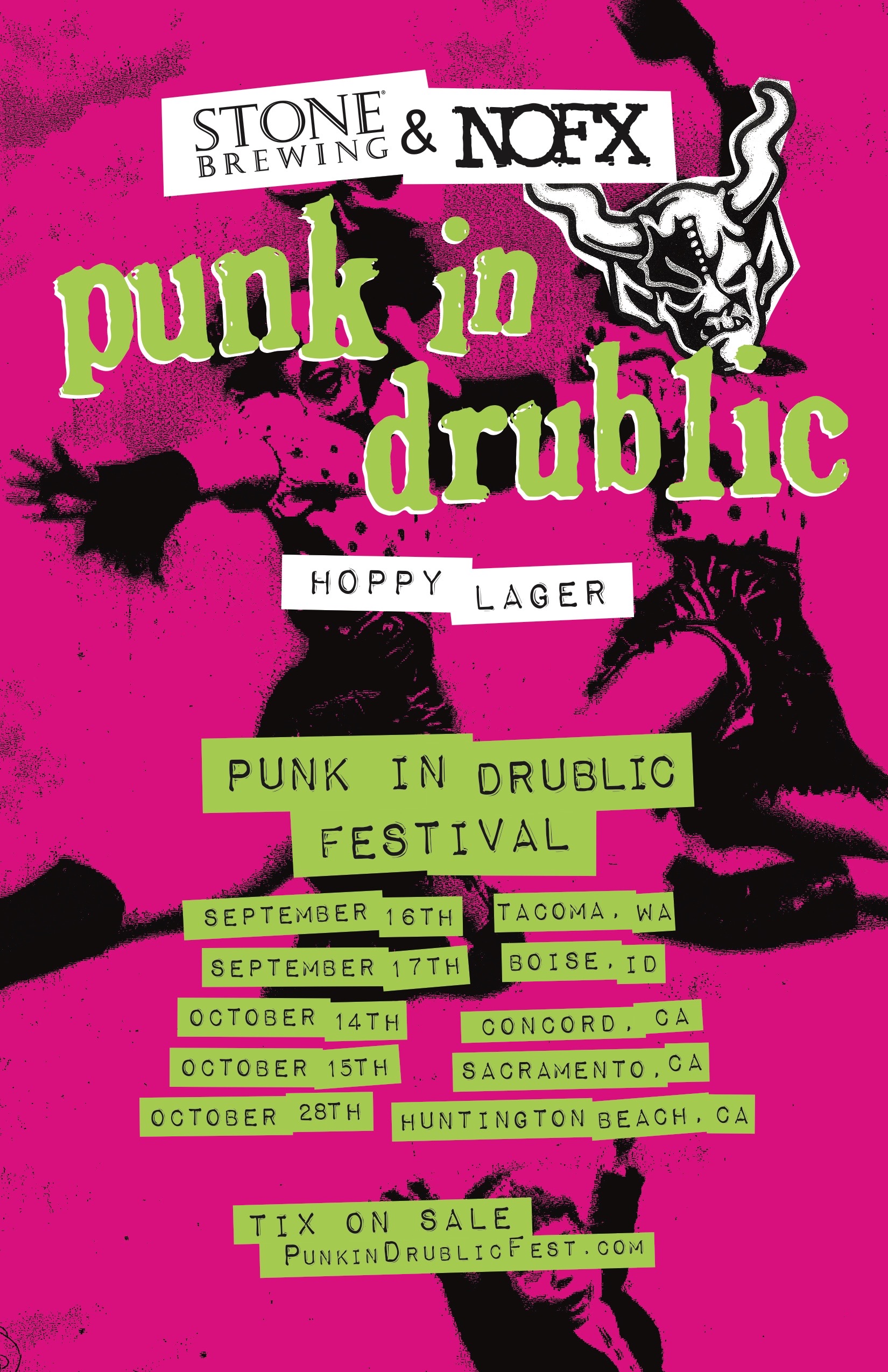 Stone Brewing has teamed up with NOFX on a new beer, Stone & NOFX Punk In Drublic Hoppy Lager. The two have also partnered on a concert tour, The Punk In Drublic Craft Beer & Music Festival with stops in Tacoma, WA and Boise, ID this weekend. Then next month the tour continues in Phoenix, AZ, Concord, Sacramento and Huntington Beach, CA.

When Fat Mike called up the guys at Stone Brewing, their first response was, “where’d you get my number and why are you calling at 3 a.m.?” Things progressed and a beer was brewed. The Punk In Drublic Craft Beer & Music Festival kicks off September 16 in Tacoma, WA and Stone & NOFX Punk In Drublic Hoppy Lager has just hit stores in 12-ounce cans….although some stores took to a no nonsense DIY approach citing punk rock as their excuse, “You don’t control punk rock with arbitrary corporate release dates. The people get their beer when I say they get their beer.” So, OK. Rock on. Hopefully you’re well into enjoying your fresh hoppy lagers.

It took careful tact for the Stone Brewing team to successfully distract the HR department while recklessly welcoming Fat Mike to the brewery. After his collaboration with Stone’s brewers to dream up just the right punk rock libation, he pitched the hops and drank all the beers, ultimately resulting in Stone & NOFX Punk In Drublic Hoppy Lager, which – against all odds – is really f***ing good. 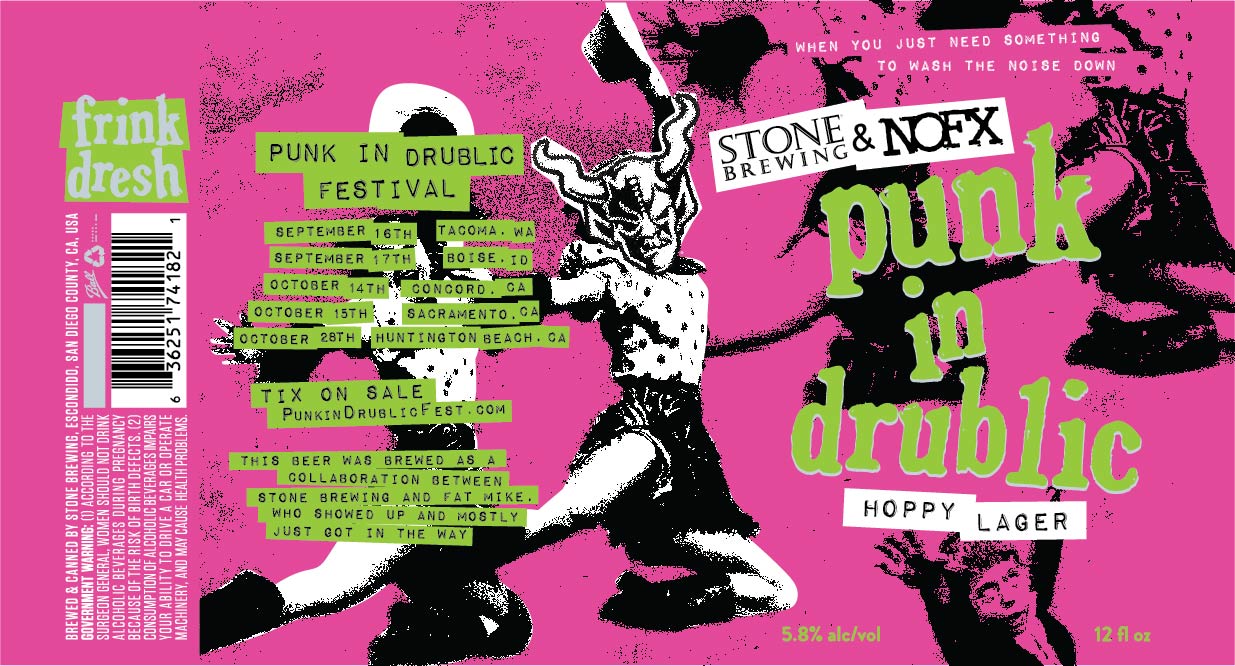 Stone’s Senior Innovation Brewing Manager Jeremy Moynier can better expand on that: “Crisp, clean and very refreshing. This beer is crushable, but not corporate, tasteless ‘crushable.’ It has a traditional pilsner aroma with malt and melon flavors leading into a medium bitter finish. We brewed with Magnum and Hull Melon, the latter of which is a newer hop variety out of Germany that results in classic pilsner qualities with a nice hoppy finish.”

When asked how Stone & NOFX Punk in Drublic Hoppy Lager tastes, Fat Mike says, “It’s something to wash the noise away.” However, other slogans offered by Mike that were quickly turned down by Stone included, “It’s the beer of champagnes” and finally, “They say you can’t get beer from a stone…oh shit, we just did!”

The collaboration isn’t just an excuse for Fat Mike to sport brewing clamps as handcuffs (although rumor has it he took full advantage of that opportunity). NOFX has announced the Punk in Drublic Craft Beer & Music Festival stopping in Tacoma, WA, Boise, ID, Phoenix, AZ, Concord, Sacramento and Huntington Beach, CA. A Brew Ha Ha Production, the event will feature four hours of tastings of more than 100 craft beers followed by NOFX and alternating co-headliners Flogging Molly and Bad Religion. Goldfinger, Less Than Jake and Bad Cop/Bad Cop among others round out the epic festival lineup.

It wouldn’t be very punk rock of us to detail Stone’s roots in music, nor Fat Mike’s devout obligation to alcohol. We definitely don’t need to get into the serendipitous parallels of Fat Wreck Chords and Stone Brewing or Stone Distributing. So what’s left are a few facts to help thirsty punk rockers get their hands on the beer and drink it like a rock star. 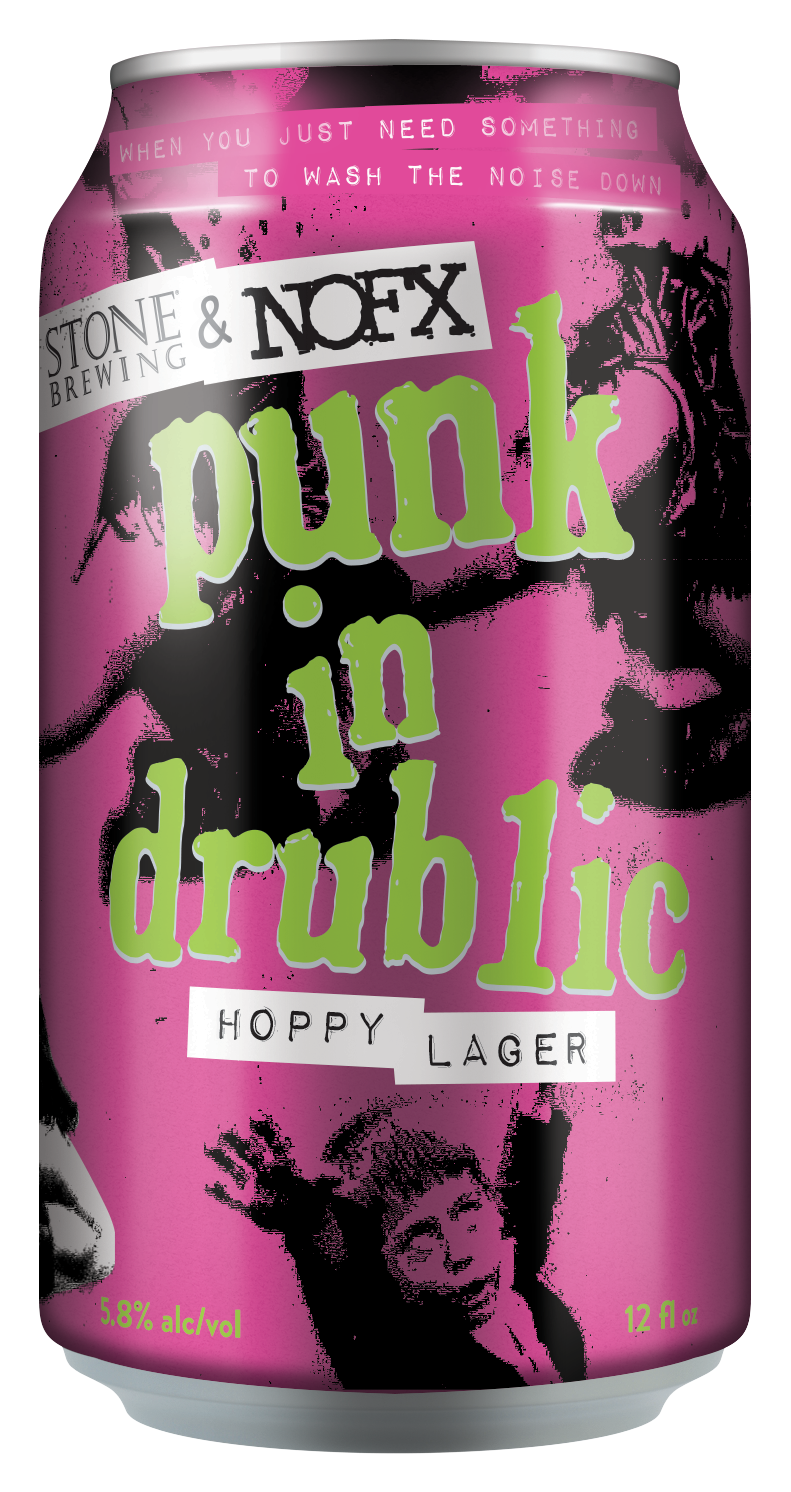