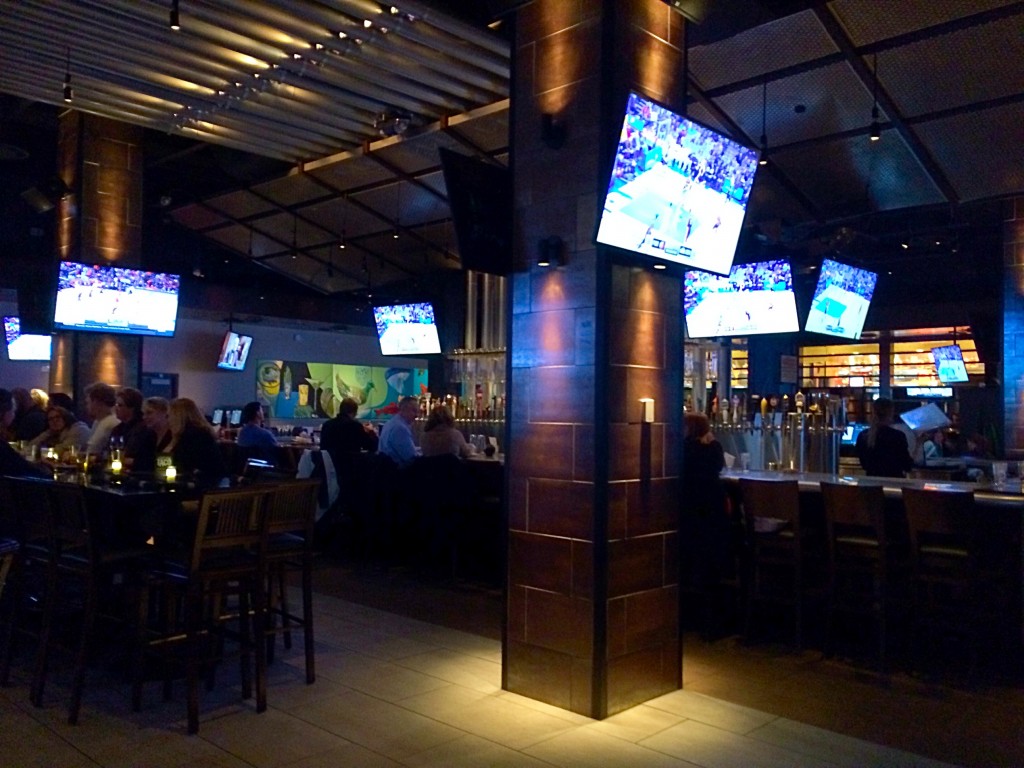 On behalf of Brewpublic, I was able to experience Yard House for the first time this week for a media dinner and beer pairing. Part of the reason I’ve never been, is due to the fact that I’m a typical Portlander, more interested in quirky local spaces to that of a national chain. Yard House Portland opened back in May 2014, their 54th restaurant of 56 nationwide, located downtown at Pioneer Place.

Greeted by Cody Getz, general manager, we were able to chat and get up to speed on how things have been progressing since their opening in May. As we sat down, Cody and another Yard House representative were debating the look of the purposeful mismatching of chairs in their otherwise sleek metropolitan style. I chimed in that I liked the look, which is pretty typical for Portland, and that started a conversation of how a chain has to be adaptable to fit into a city like Portland.

One of the most notable accommodations for their Portland location is the fact that 42 of their 130 taps are dedicated to local, craft beer, which is far more than any of their other Yard House locations. They were very interested in getting to know the Portland customer and culture on a deeper level, and had just as many questions for us as we did them, which I appreciated.

Surprisingly, Yard House was more excited to share their dinner menu and sample cocktails with the group, since everybody at the table was pretty familiar with the beers on draft. I started the evening with one of their specialty cocktails, the Gin & Ginger, made with Hendrick’s Gin and just the right amount of ginger, to give the drink some spice.

Carlito Jocsom, corporate executive chef and curator of the Yard House’s national menu, was on hand to share some of his favorite dishes the restaurant creates. Dishes ranged from; the copyrighted “Vampire” taco, bánh mì, brussels sprouts with ripped potatoes, mac and cheese with truffle oil, lamb burger, halibut, and then desert. I must admit to being pleasantly surprised at the taste and quality of the food, which I did not expect. Oddly enough, my three favorite dishes were the spicy bánh mi sandwich with papaya relish and jalapeños, the porcini crusted halibut, and the lamb burger not far behind.

The tour of their keg storage was impressive. Anytime you hear of a restaurant with a massive number of taps, the first thought is about the beer staying fresh. Yard House tags every keg with a bar code, which gets scanned once a week to ensure the beer freshness. If you look up, while sitting in the front of the restaurant, you’ll see metal cylinders, which look more decorative than anything. Those metal cylinders carry six lines apiece, from the refrigerated keg room to the tap.

The most exciting news of the night was hearing that Yard House was able to collaborate using some Pappy Van Winkle Reserve 23 barrels, which were filled with Mescal, and then aged with Firestone Walker’s Parabola. Only 18 kegs of this barrel-aged beer were made, and we were all advocating heavily for some to make its way to Portland this February or March! As a side note, in years past Firestone Walker used to brew the Yard House house beer, however Uinta Brewing currently brews them.

Yard House also has the NFL package, so no matter your team, they play most of the games on their numerous TVs’ around the restaurant. During the weekends there is no sound on the games, so you can watch while still having a conversation, but Monday night the sound is turned on. Yard House is a large space with 66 tables, and takes reservations for parties of eight or more. Happy hour is Monday thru Friday, 3-6 pm, with drink discounts and a long list of half priced appetizers.  Their menu is outlined with plenty of vegetarian and under 600 calorie options.

I was really impressed with the variety and quality of Yard House food and drink. There, I said it! This non-chain eating person was just proved wrong, and I might as well move to the suburbs now. I’m already craving the salted caramel butterscotch pudding! Cheers!