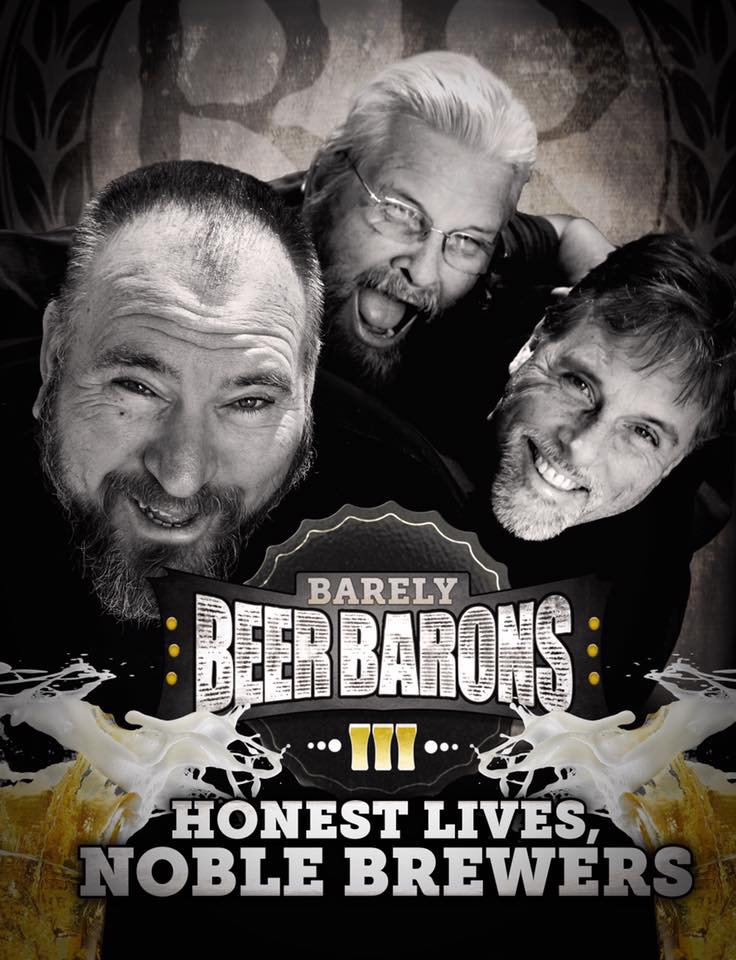 When looking from the outside, today’s world of craft beer is reminiscent of the collecting of baseball cards of my youth. Trading one extra player’s card for one I didn’t have is eerily similar to the trading of rare beer today. It’s fitting that the founders of the brewery Brew Rebellion met by their appreciation of sports cards.

Brew Rebellion is the focal point of the new series, Barely Beer Barons exclusively shown on Amazon Prime. Two of its owners were former partners in a sports card shop. Founded by Brad O’Donnell, Andy Sutfin, and Ed Parker, Brew Rebellion is a brewery based in Californian that had some of its day-to-day operations being filmed that turned into the seven episode series of Barely Beer Barons.

Over the past few years there have been a few television shows devoted to beer including Brew Dogs, Beer Geeks and Brew Masters.

Read our interview Michael Ferguson on the show he hosted Beer Geeks.

Learn more about how Barely Beer Barons came to be from Brew Rebellion founder Ed Parker in our interview below.

How did the three of you meet?

Ed Parker: I have known both Andy and Brad since the early nineties. We were involved in the sports card hobby and Brad and I actually had a sports card shop together and Andy would come in to hang out.

Why did the three of you decide to open a brewery?

Ed: The economic tsunami of 2010 really took a toll on me and my business that was heavily reliant upon available credit and equity in real estate. As you know, both of those business elements disappeared and we were all ready to do something new. Andy and Brad started home brewing in about 1994 and they would bring these amazing beers to my annual Halloween party so I knew they had a great product. I didn’t know anything about beer but I thought that I might be able to help from a sales and business administrative standpoint.

Please tell us more about your brewery, Brew Rebellion.

Ed: We started our journey to building our brewery by going to the swap meet to sell our sports cards and extra household items. We raised $3500 during this exercise in “Redneck Crowdfunding” and rented a storeroom behind a Mexican market. We then came up with our founders society where 100 fans of our beer gave us $250 each to help us get started. With that money, we were off and running at our tiny Yucaipa, California nano brewery.

Read our interview with James Watt from BrewDog on his first season of Brew Dogs.

You have a new series, Barely Beer Barons that is airing on Amazon Prime. How did this relationship begin?

Ed: A producer friend of mine Brian Corder took interest in our story and decided to shoot a reality show pilot. In time, that pilot turned into a complete series, and was eventually picked up by Janson Media. They have distributed several great beer documentaries, such as ‘Crafting a Nation’, ‘Brewed in Brooklyn’ and most recently ‘The Irish Pub’ available on Netflix. Janson has had great success with Amazon Prime, and we’re excited to be added to their portfolio.

Ed: The folks that will watch Barely Beer Barons will be able to observe the birth of a new business. In a world of big craft brewing ventures, our story is one that should appeal to anyone who appreciates what you can do in a country as great as ours, how to go from home brewer to a competitive production brewery. We didn’t, and still don’t, have proper bank or institutional funding and we compete every day against much larger craft and big beer competitors. By the way, the best t-shirt that we have sold in our tap room said, “We started with nothing and have most of it left”, true words indeed.

We hope that viewers are inspired by our story and will maybe move forward with their dreams and ambitions.

Read our review of Brew Masters first episode that was hosted by Dogfish Head founder and president Sam Calagione.

Barely Beer Barons is available to Amazon Prime members free of charge and to non-prime members at $0.99 per episode.