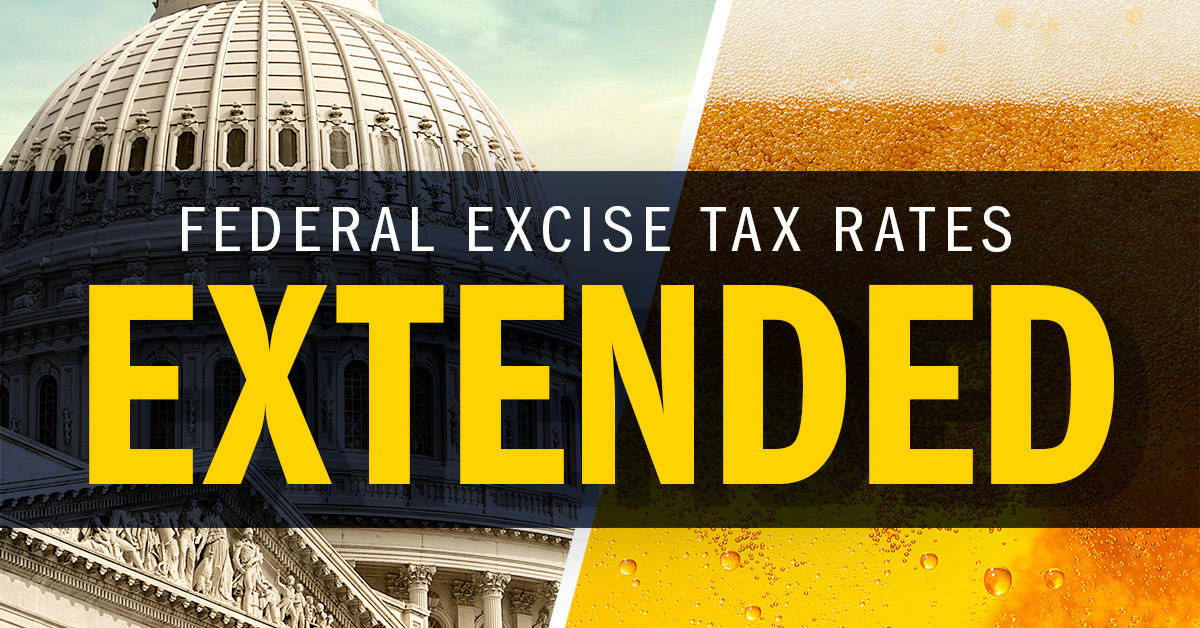 Boulder, Colo. • Dec. 20, 2019 — The Brewers Association (BA)—the not-for-profit trade association dedicated to small and independent American brewers—expresses its gratitude to the 116th Congress for extending the current federal excise tax (FET) rates for breweries for one year (2020). Those rates, which were recalibrated lower in 2018, were slated to increase—in most cases by 100 percent—unless Congress acted by Dec. 31.

“The lower FET rates have been a boon to small and independent brewers located in all 50 states and nearly every congressional district,” said Bob Pease, president and CEO, Brewers Association. “These savings empowered brewers to reinvest in their businesses and resulted in an annual tax savings of more than $80 million.”

Brewers reinvested the additional capital by creating thousands of new jobs, buying new equipment, expanding their operations, and improving employee benefits. Thanks to the recalibrated rates, craft brewing jobs grew by 15,000 in 2018 to more than 150,000 nationally—the largest job increase on record for small brewers.

“The savings resulting from the adjusted FET rates have had a huge impact on the brewing industry here in Maine,” said Dan Kleban, owner and brewer, Maine Beer Company, Freeport, Maine. “Our company was already in the midst of an expansion when this bill passed, and the savings allowed us to reinvest in the business, our employees, and the environment. Growth in Maine’s brewing industry has helped boost other economies throughout the state; creating new agricultural opportunities, helping increase tourism, and even shaping beer science programs in our local colleges. In uncertain financial times, these savings help create a stronger economic future here in Maine.”

“We are so thankful that Congress has extended the current federal excise tax rates for another year,” said Ryan Wibby, president and brewmaster, Wibby Brewing, Longmont, Colo. “When preparing the 2020 budget, I was struggling to find the capital needed for the expansion of our growing brewery. The extension of the FET rates will free up $20,000, which will allow us to purchase the production equipment necessary to meet our projections and achieve our goals.”

By extending the language another year, congressional leaders acknowledged the profound impact the reduced excise tax rate has had on the growth and trajectory of a uniquely American industry. Craft brewers contributed $79.1 billion to the U.S. economy in 2018 and were responsible for more than 550,000 full-time equivalent jobs, an 11 percent increase from 2017, with 150,000 of those jobs directly at breweries and brewpubs.

“Cape May Brewing Company is a small, family-owned business, and with the extension of the federal excise tax rates, we expect to save over $100,000 next year,” said Ryan Krill, co-founder and CEO, Cape May Brewing Company, Cape May, N.J. “Every dollar we make is reinvested into our brewery. As we intend to increase production by nearly 30 percent next year, this money could be used to create a number of well-paying jobs in the county with the highest unemployment rate in New Jersey.”

“As a small business owner in an industry with razor-thin margins, the extension of the federal excise tax reduction is a huge sigh of relief. The decrease over the past two years has allowed us to hire an additional employee and purchase a fermentation tank to increase production. A tax rate increase at this point would have meant increasing prices for our neighbors and cutting labor,” said Leah Cheston, owner, Right Proper Brewing, Washington, D.C. “I will breathe easier for a few months before turning my focus back to making the new rate permanent, as the unknown brings its own sets of challenges for planning and forecasting. However, knowing that Congress has heard us and acted twice now makes the outlook a little more optimistic.”

The Brewers Association will continue to work with its congressional champions to pass the Craft Beverage Modernization and Tax Reform Act (CBMTRA), legislation that would make the rates permanent.

“While this stop-gap extension provides some relief for the coming year, making these recalibrated excise tax rates permanent would go a long way in providing certainty and stability in a competitive business climate,” said Pease.

Congress overwhelmingly supports the lower FET, with more than half of Congress co-sponsoring the Craft Beverage Modernization and Tax Reform Act (S. 362/H.R. 1175), including 73 Senate and 332 House co-sponsors (as of Dec. 20, 2019).