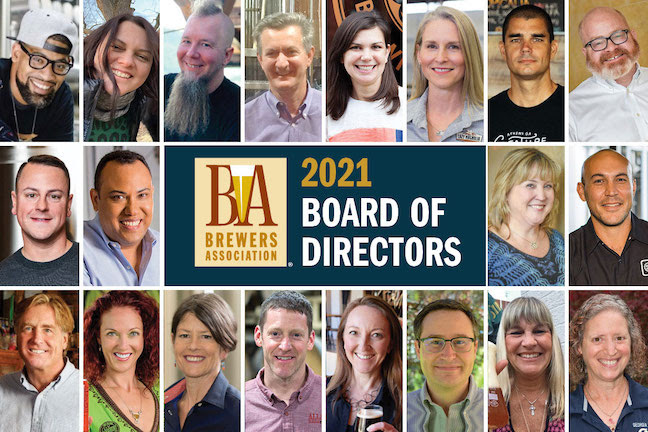 Boulder, Colo. • Feb. 19, 2021 — The Brewers Association—the not-for-profit trade association dedicated to small and independent American brewers—announced its 2021 board of directors, adding four new representatives to the 20-person board.

Dan Kleban, co-founder, Maine Beer Company (Freeport, Maine) continues as board chair for a second term. He has served on the board since 2015.

“I’m honored to be in my second year as chair of the board,” said Kleban. “I view the year ahead as one of opportunity. While we have a lot of work to do to address many of the issues that have been presented to us over the last year, we also have the chance to position the Brewers Association to thrive as we move out of the pandemic.”

Kleban acknowledged that every member of the Brewers Association has been affected in some way by the challenges of the past year, so it is important that the association look at the ways it can help the industry bounce back. “We will continue to press federal and state policymakers to support our industry as we continue to operate under very challenging circumstances,” Kleban said. “The passage of CBMTRA [the Craft Beverage Modernization and Tax Reform Act] this past year is a huge help, providing stable tax reform that will help brewers plot out their futures as well as saving them money that they can reinvest in their businesses and employees. Issues of equity, inclusion, and justice are at the top of our list of priorities as well. The board and I are committed to doing the ongoing work to help our beer community become a truly inclusive community.”

The 2021 Brewers Association Board of Directors is comprised of the following members:

The board of directors guides the strategic direction of the Brewers Association and governs the activities of the professional division of the BA as well as the American Homebrewers Association, Brewers Publications, and events including the Great American Beer Festival® and the Craft Brewers Conference® & BrewExpo America®.

“2020 was undoubtedly the most challenging time in recent history for both the craft brewing community and society at large,” commented Bob Pease, president and CEO, Brewers Association. “While there are signs of a potential end to the health and economic crisis, the challenges of 2020 will likely continue into some, if not all, of 2021.

“I look forward to working alongside our new and longstanding directors to forge a path forward for the craft brewing community and deliver timely and relevant resources to help our members of all sizes and business types succeed during this period of continued change.”