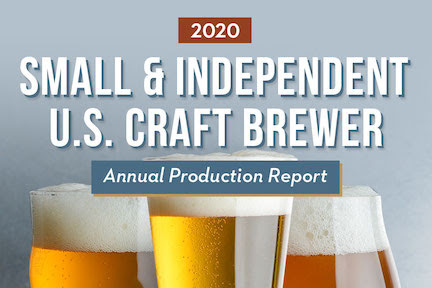 “2020 was obviously a challenging year for many small brewers, but also one that proved their resilient and entrepreneurial nature,” said Bart Watson, chief economist, Brewers Association. “In a year where U.S. draught sales were down more than 40%, small brewers found new ways to connect with their customers and keep their businesses running.”

The number of operating craft breweries continued to climb in 2020, reaching an all-time high of 8,764, including 1,854 microbreweries, 3,219 brewpubs, 3,471 taproom breweries, and 220 regional craft breweries. Throughout the year, there were 716 new brewery openings and 346 closings. While openings decreased approximately 30% compared to 2019, only half of this drop is attributed to COVID. Increasing market competitiveness and maturity were also factors, and the decline was apparent before the pandemic.

“While many small breweries will remain under pressure until they can fully reopen and welcome their communities into their breweries, the 2020 closing rate has remained on par with 2019, suggesting that the vast majority of breweries will survive going forward,” added Watson.

Note: Numbers are preliminary. For additional insights from Bart Watson, visit Insights & Analysison the Brewers Association website. The full 2020 industry analysis will be published in the May/June 2021 issue of The New Brewer, highlighting regional trends and production by individual breweries.

* Does not include FMBs/FSBs. With those included, total taxed-as-beer products up 1%.

1An American craft brewer is a small and independent brewer. Small: Annual production of 6 million barrels of beer or less (approximately 3% of U.S. annual sales). Beer production is attributed to the rules of alternating proprietorships. Independent: Less than 25% of the craft brewery is owned or controlled (or equivalent economic interest) by an alcoholic beverage industry member that is not itself a craft brewer. Brewer: Has a TTB Brewer’s Notice and makes beer.