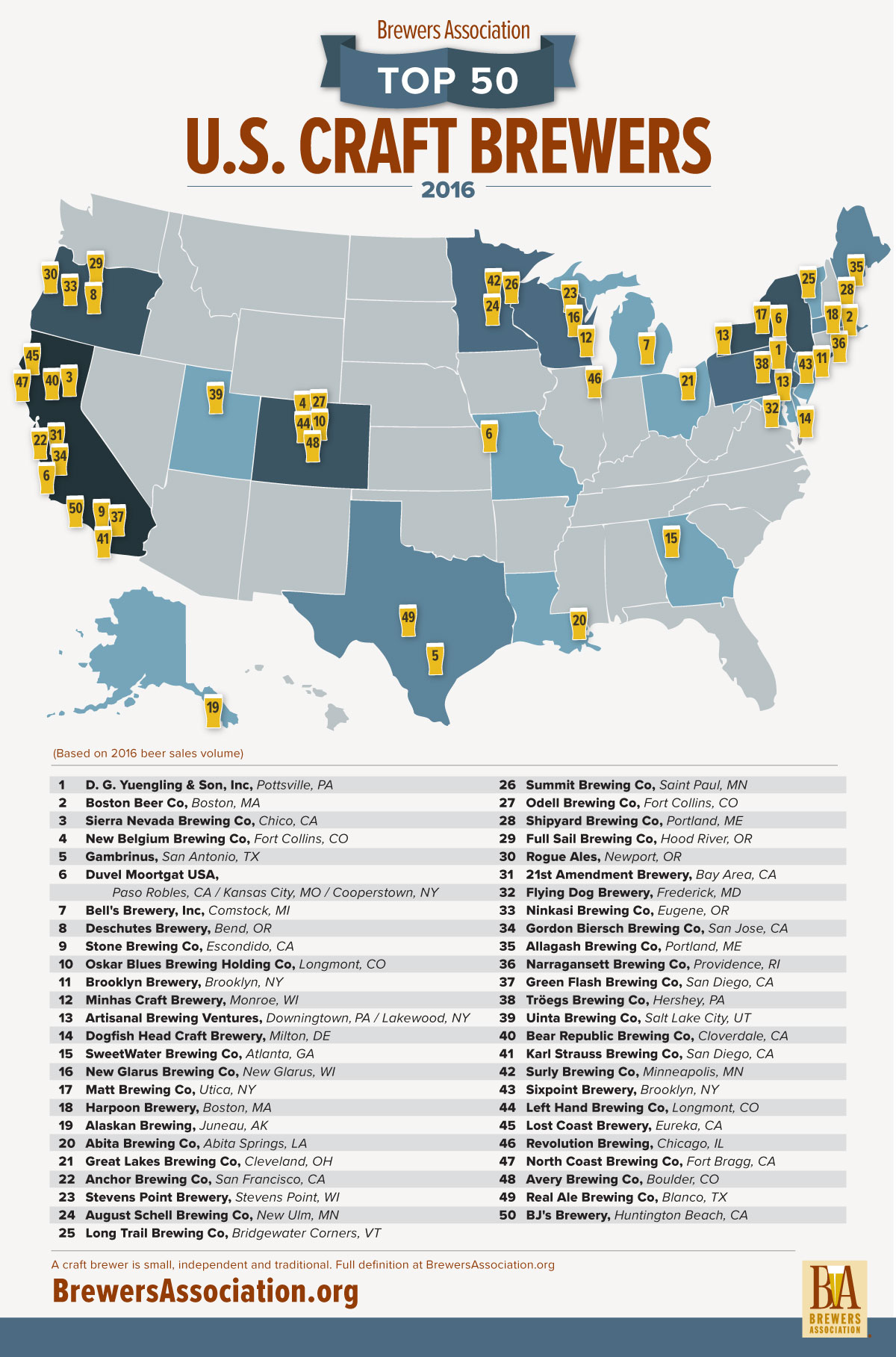 “With such a broad range of brewers in today’s beer landscape, the leading small and independent producers have helped build the craft brewing industry to what it is today,” stated Bart Watson, chief economist, Brewers Association, in a release. “Embracing their experience and ability to thrive and overcome challenges, the top producing craft brewers will continue to inspire, innovate and influence the future of beer.”

When it comes to breweries that have operations in Oregon that made the Top 50 Overall U.S. Brewing Companies list this is a bit larger since the Beaver State has a handful of breweries that the Brewers Association does not classify as being “craft”. This list includes #1 A-B InBev (10 Barrel Brewing), #2 MillerCoors (Hop Valley Brewing), #5 North American Breweries (Portland Brewing), #10 Craft Brew Alliance (Widmer Brothers Brewing), #11 Gambrinus (BridgePort Brewing), #15 Deschutes Brewery, #38 Full Sail Brewing, #39 Rogue Ales, and #42 Ninkasi Brewing.

For a complete list of brands in the overall brewing category, please visit BrewersAssociation.org.

Next month a more detailed State of the Industry report will be delivered during the 2017 Craft Brewers Conference, held from April 10 -13, 2017 in Washington, D.C. The Association’s full 2016 industry analysis, which shows regional trends and sales by individual breweries, will be published in the May/June issue of The New Brewer, available in May 2017.

1 Figure based on companies that met craft brewer definition for all or part of 2016. An American craft brewer is small, independent and traditional. Small: Annual production of 6 million barrels of beer or less (approximately 3 percent of U.S. annual sales). Beer production is attributed to the rules of alternating proprietorships. Independent: Less than 25 percent of the craft brewery is owned or controlled (or equivalent economic interest) by an alcoholic beverage industry member that is not itself a craft brewer. Traditional: A brewer that has a majority of its total beverage alcohol volume in beers whose flavor derives from traditional or innovative brewing ingredients and their fermentation. Flavored malt beverages (FMBs) are not considered beers.