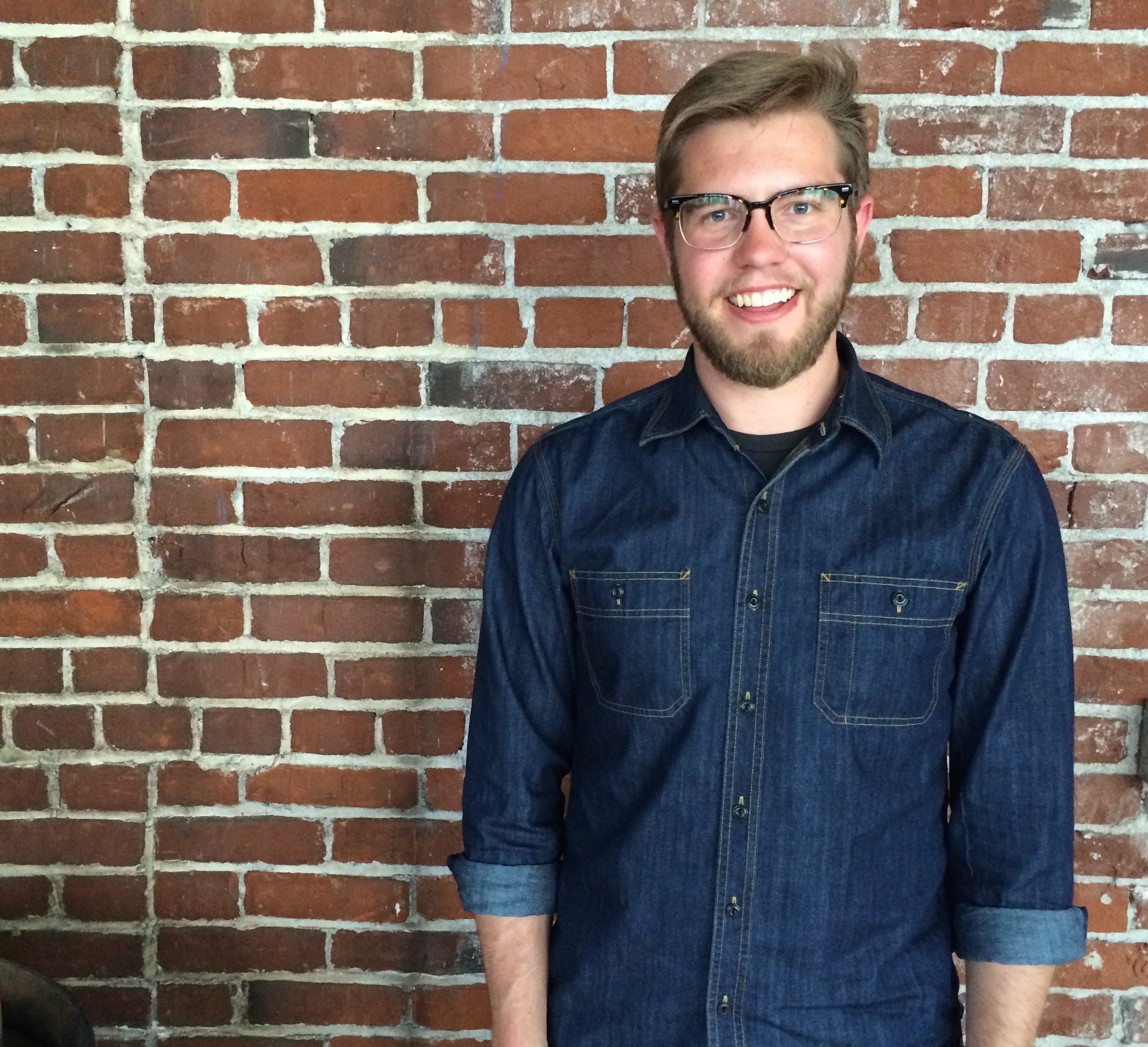 McGuinness, a Portland area native, began his foray into brewing when he started as an intern at 10 Barrel Brewing in Bend, Oregon. This positive experience at 10 Barrel led him to enroll in one of the most prestigious brewing schools in the world, Siebel Institute of Technology. In 2010 McGuinness graduated from Siebel, but it was during this time at school that it took McGuinness to Munich where he was immersed in the European brewing culture. While studying in Munich this led to an appreciation of the culture and felt that if the opportunity presented itself he would jump at the chance to brew and be part of this strong brewing heritage. 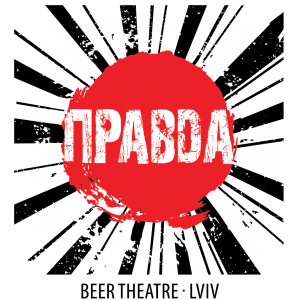 Upon graduating from Siebel in Chicago, Illinois, McGuinness packed his bags for Kansas to join the brewing team at Tall Grass Brewing where he brewed for the better part of a year. From there he came back to the Pacific Northwest to take on the Assistant Brewer position at Walking Man Brewing in Stevenson, Washington. Here he had the opportunity to brew under Head Brewer Bolt Minister for a short time. After only 3 months when Minister left for a position at Portland Brewing, McGuinness took over the Head Brewer position for the next 9 months.

Due to a personal relationship that McGuinness became involved in while at Walking Man Brewing, he relocated to Burlington, Vermont with plans to work at Zero Gravity Craft Brewery. However things did not work out as planned. When he arrived in town the brewing position he thought he had was now not available. Stuck in Vermont he took on a different job to get by but when the relationship he was in ended, he packed his bags back to Portland to be reunited with Minister but this time it was at Old Town Brewing. After being at OTB for 15 months, McGuinness will now depart to brew abroad in Lviv, Ukraine. With his departure from OTB, Head Brewer Andrew Lamont, formerly of Boston Beer’s Samuel Adams, will solely be at the helm until a replacement Assistant Brewer is found. 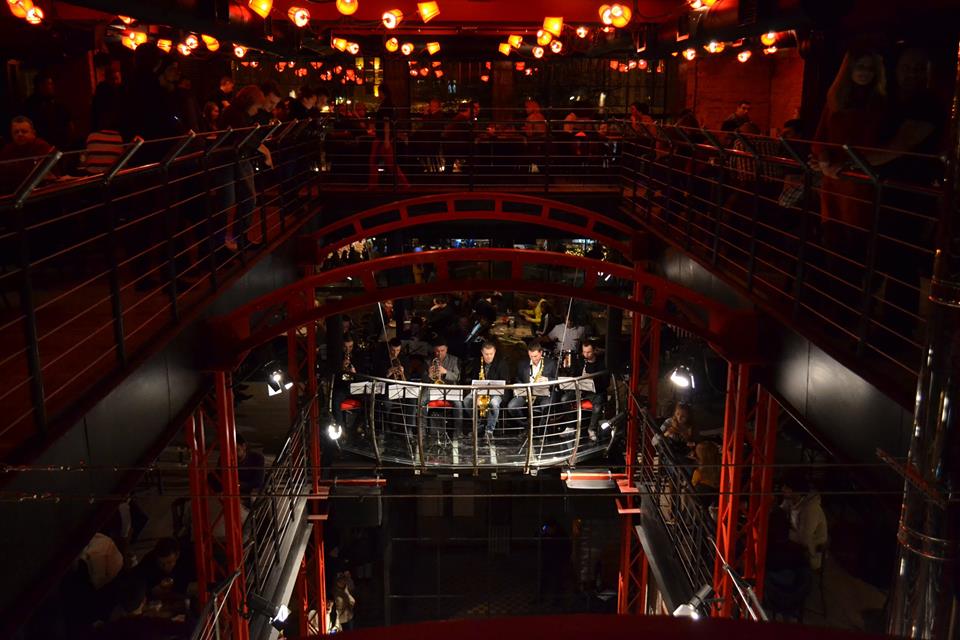 Since McGuinness was in Munich for a time during his Siebel days, he knew that he always wanted to brew abroad. “This is something I always wanted to do.” He became more serious about this vision when he met a fellow brewer named Roel Wagemans from Netherlands brewery Brouwerij ‘t IJ while Wagemans was visiting Portland last summer during the Oregon Brewers Festival. They kept in touch and last month Roel contacted him about a Head Brewer position in Lviv, Ukraine at Pravda Beer Theatre. The position became open when the original Head Brewer left to go back home to be with her family in Belgium.

McGuinness traveled to Ukraine the week of April 7th and spent a considerable amount of time at the brewery developing an action plan on how he can improve the brewery’s output. His goal is “Be there as long as I can be. At least a year would be great! Just being able to walk through the city made me realize all of the history there.” 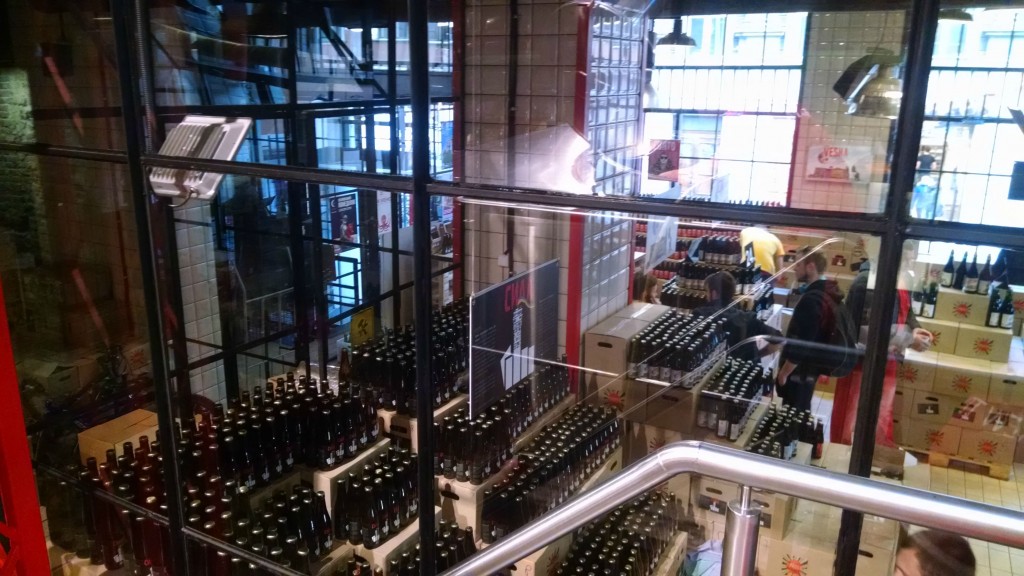 Lviv is located in far Western Ukraine about 40 miles from the border of Poland and has a population of about 735,000 that makes it Ukraine’s seventh most populated city. Fortunately for McGuinness, Lviv is located far away from the country’s war torn area farther east. Since Ukraine is not part of the European Union its currency is separate. Because of this and the war, the country struggles financially but in Lviv there are better economic conditions than in other parts of the country.

When the discussion with McGuinness turned to the competitors in Lviv, Ukraine, it was mentioned that, “There are currently about seven breweries in town. The largest brewery, Lviv Brewery, is now owned by Carlsberg.”

While visiting there for a week, McGuinness got a sense that the culture is a bit different than what we have here in Portland that lends to a much more darker and colder feeling of the people. McGuinness stated, “I smile too much for their culture. Once the people get to know you better they become less guarded and open up a bit more.” 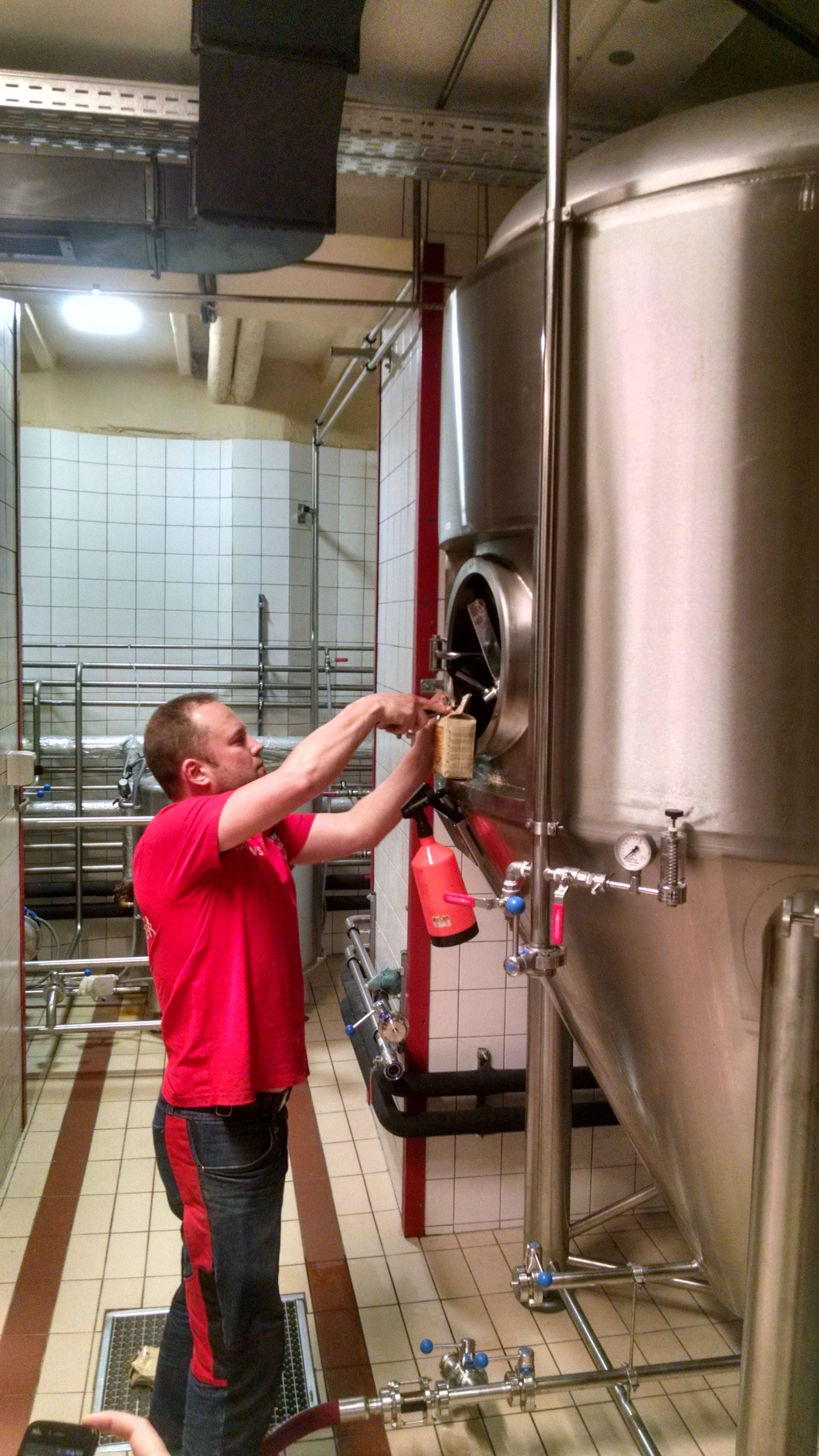 Then when it comes to the language barrier this will be a bit more of a challenge. Many of the younger people are versed enough in English and when he struggles in the communication aspect, patience is king. “I can get by with enough basic English.”

So what lies ahead for his tenure as the new Head Brewer? “The challenge for me will to be the head brewer that I always wanted to be. This is a great opportunity and I’m excited. I feel that over in Europe this younger generation doesn’t just want the classic beers that have always been brewed for hundreds of years there. The American style of brewing is becoming super popular.”

“We want to bring in other brewers from all over the world on collaborations to brew their styles of beers. Brewers from America, Belgium, Germany and such to come to Lviv to brew with. Yuri, the owner, wants to be an American Craft Brewery with an Ukrainian twist,” says McGuinness. “Our plan is to distribute throughout Ukraine and want to do some of the other European festivals.” 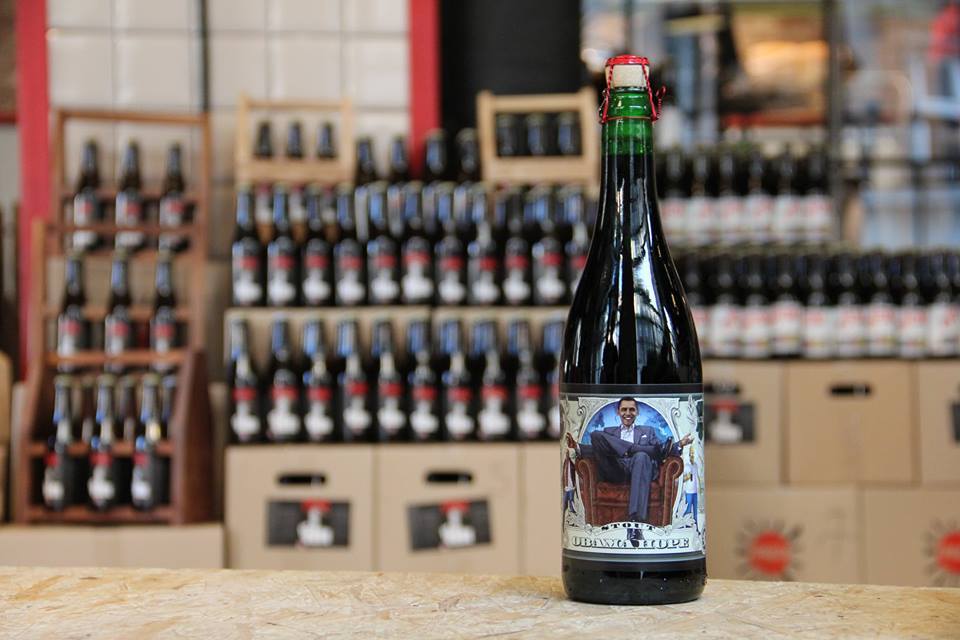 Pravda Beer Theatre is located in downtown Lviv, Ukraine in a multilevel building that houses a complete entertainment empire. The building is home to the brewhouse and then with levels above for its pub that is known for its live music. There is also a bottleshop attached where one can grab some beer to go.

The brewery features a Kaspar Schulz built 20 Hectoliter (about 17 BBL) automated brewhouse. Sitting alongside this brewhouse that its 2015 production goal is to produce 6,500 barrels this year are 23 fermenters and serving tanks. One unique aspect of the brewery is the use of sanitary plastic bags to store the beer in the horizontal serving tanks. This set up keeps the need to clean the serving tanks at a minimum. 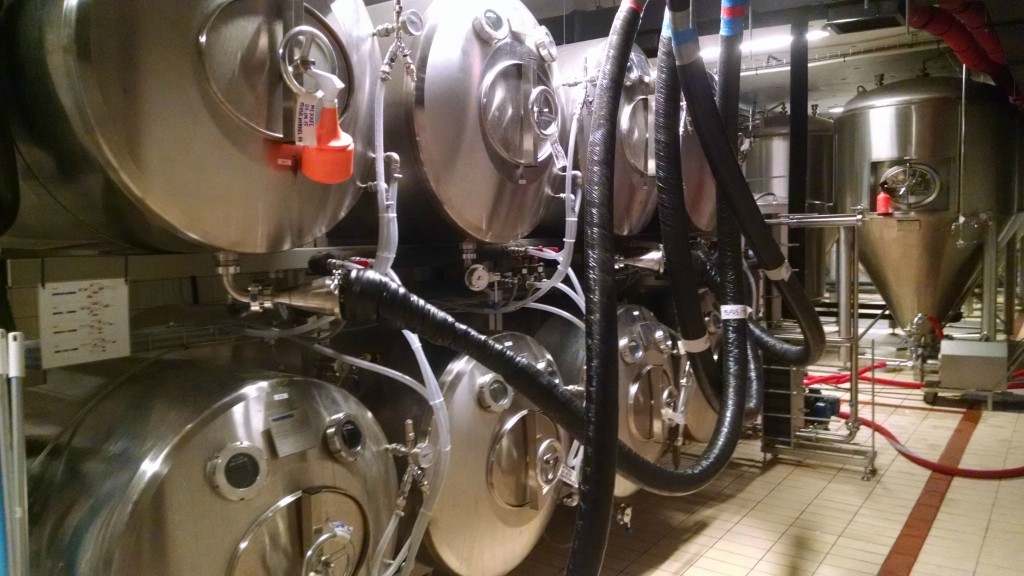 “I did some brewing on the system during my visit. The automated system is very nice. Plus I will have four people working under me. I have a lot to bring to the table,” states McGuinness.

To be able to drink Pravda Beer Theatre’s beers off premise one must visit the bottleshop that is located in the brewery building. Currently the brewery’s bottles are only available for sale on premise. And it’s these bottles or more specifically its labels that has been gaining some notoriety for the brewery.

Yuri has been pushing the limits on some of its beer labels with its political satire associated on them. McGuinness tells the story that the brewery has a beer that is called Putin Huilo that is about Vladimir Putin, President of Russia. McGuinness states, “Putin Huilo translates to Putin is a dickhead.” This is strong language against the leader that is at war against Ukraine on its eastern border.

But it’s not just Putin that has the ire of Yuri. He also pokes fun at other world leaders that have not intervened with this ongoing war with Russia. The brewery also pokes fun at Angela Merkel, Chancellor of Germany, along with our own President Obama. Here’s a video we found on youtube.com that highlights these labels along with Pravda’s owner, Yuri discussing this decision.

We here at Brewpublic wish Cory the best in his new brewing adventure in Ukraine. Hopefully a few Oregon brewers will make their way over to Lviv to brew a collaboration beer with McGuinness. If so, all we ask is that the beer gets shipped back here to Portland for all of us to enjoy. Cheers to you Cory!