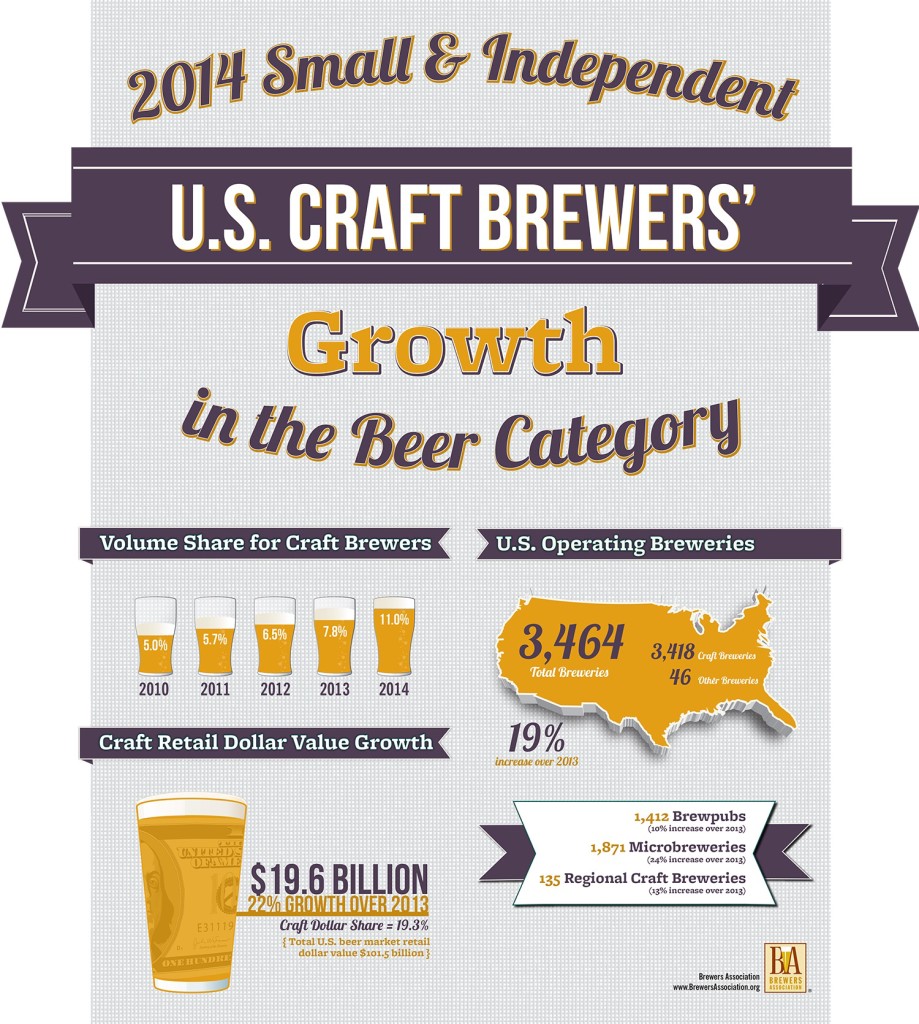 “With the total beer market up only 0.5 percent in 2014, craft brewers are key in keeping the overall industry innovative and growing. This steady growth shows that craft brewing is part of a profound shift in American beer culture—a shift that will help craft brewers achieve their ambitious goal of 20 percent market share by 2020,” said Bart Watson, chief economist, Brewers Association. “Small and independent brewers are deepening their connection to local beer lovers while continuing to create excitement and attract even more appreciators.”

Additionally, the number of operating breweries in the U.S. in 2014 grew 19 percent, totaling 3,464 breweries, with 3,418 considered craft broken down as follows: 1,871 microbreweries, 1,412 brewpubs and 135 regional craft breweries. Throughout the year, there were 615 new brewery openings and only 46 closings.

Combined with already existing and established breweries and brew pubs, craft brewers provided 115,469 jobs, an increase of almost 5,000 from the previous year.

“These small businesses are one of the bright spots in both our economy and culture. Craft brewers are serving their local communities, brewing up jobs and boosting tourism,” added Watson. “Craft brewers are creating high quality, differentiated beers; new brewers that match this standard will be welcomed in the market with open arms.”

Note: Numbers are preliminary. The Brewers Association will release the list of Top 50 craft brewing companies and overall brewing companies by volume sales on March 31. Additionally, a more extensive analysis will be released during the Craft Brewers Conference & BrewExpo America® in Portland, Oregon from April 14-17. The full 2014 industry analysis will be published in the May/June 2015 issue of The New Brewer, highlighting regional trends and production by individual breweries.

3 Figure derived from comparable data set based on 2014 update of craft brewer definition.

About the Brewers Association
The Brewers Association is the not-for-profit trade association dedicated to small and independent American brewers, their beers and the community of brewing enthusiasts. The Brewers Association (BA) represents more than 70 percent of the brewing industry, and its members make more than 99 percent of the beer brewed in the U.S. The BA organizes events including the World Beer Cup®, Great American Beer Festival®, Craft Brewers Conference & BrewExpo America®, SAVOR?: An American Craft Beer & Food Experience, AHA National Homebrewers Conference, National Homebrew Competition and American Craft Beer Week®. The BA publishes The New Brewer magazine and its Brewers Publications division is the largest publisher of contemporary and relevant brewing literature for today’s craft brewers and homebrewers.