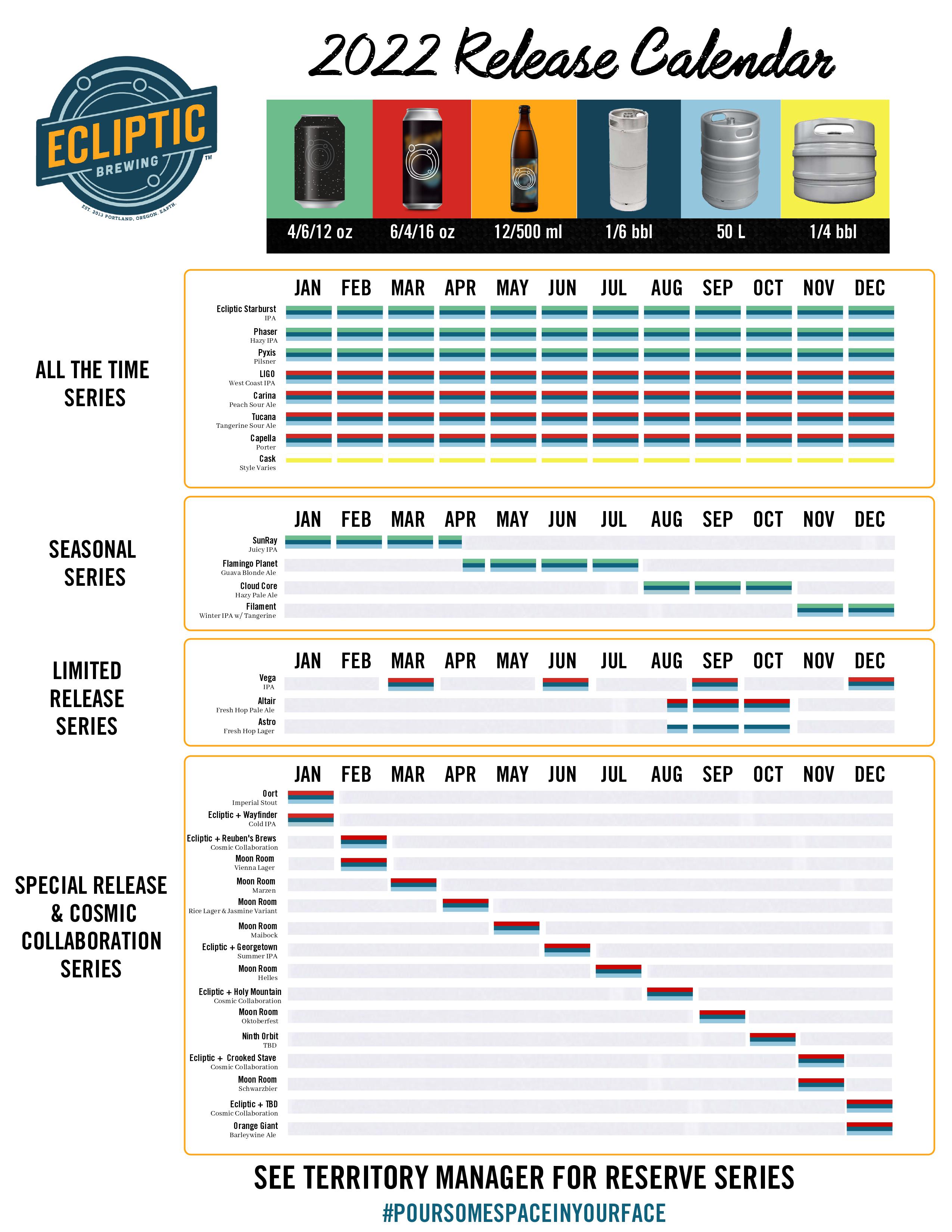 Portland, Oregon. Earth. (December 16, 2021)- Portland, Oregon’s Ecliptic Brewing is excited to announce its 2022 beer release calendar. It is a big year for the brewery, with the addition of a new All the Time Series beer, plus an entirely new series which celebrates their recently-opened location in Southeast Portland. Here’s the plan:

Ecliptic Brewing’s current All the Time Series beers will continue, but Pyxis Pilsner – which originally launched early this year in the Limited Release Series – has moved to the lineup and will be available throughout the company’s distribution footprint. Additionally, LIGO West Coast IPA will launch in early 2022 in 16-ounce can four-packs. With a moderate ABV and modern hop character, this brew offers another unique IPA option year-round. Lastly, Phaser Hazy IPA, which moved to the All the Time Series mid-2021, will eventually get an updated label design to reflect the series change.

Brand new for 2022 is the addition of Ecliptic’s Moon Room Series. The series will feature a collection of lager beer, in celebration of the brewery opening its second location, which is well setup for lagering. While technically part of the company’s Special Release Series (in terms of UPCs and pricing), this mini-series showcases a new label design that matches the dark and moody vibe at the physical Moon Room location. Other classic Special Release beers, such as Oort Imperial Stout and Orange Giant Barleywine, will also return.

Additionally, Ecliptic’s Cosmic Collaboration Series will include six collab beers next year, as the company plans to brew alongside esteemed breweries such as Reuben’s Brews, Crooked Stave, Georgetown Brewing and Holy Mountain Brewing. The 2021 success, Ecliptic + Wayfinder Cold IPA, will be returning first up in the series this January.

The Limited Release Series will continue to feature Vega IPA, with interesting and unique releases each quarter, along with both Altair Fresh Hop Pale Ale and Astro Fresh Hop Lager.

The brewery will continue to release beers from its barrel-aging program as part of the Reserve Series. Keep an eye out for brew “5000” launching in 16-ounce cans and draft. This is Owner and Brewmaster John Harris’ 5000th batch of beer ever brewed at Ecliptic! The milestone barrel-aged beer will be released in quarter one of 2022.

Lastly, the brewery will continue to produce small-batch, draft only beers from its pilot system. These extremely limited kegs are available at one or both taprooms. Follow along on eclipticbrewing.com or the company’s Instagram page for real-time updates on these brews, including Brewer’s Spotlight Series, Anniversary Series and Moon Room exclusives.

All the Time Series