“This is big,” announced Mayor Steve Lawrence to a very large crowd at the grand opening of Freebridge Brewing in The Dalles, Oregon this past month. Finally after a century of not having a brewery, The Dalles now has a brewery and taproom to call its own in this town along the Columbia River.

Back in 1867 Charles Schanno established Columbia Brewery in The Dalles but about 50 years later when prohibition hit Oregon the brewery closed its doors in 1916. Now 100 years later The Dalles finally has its very own brewery with Freebridge Brewing. Soon Freebridge will be joined by Sedition Brewing, once known as Defiance Brewing, will open in the coming months down the street.

Over two years in the making, Steve and Laurie Petroff-Light realized their dream when the couple founded Freebridge Brewing. The downtown location is located in a building that was once going to be the U.S. Mint that was most recently home to Erin Glenn Winery.

The couple decided to take the plunge into the brewing industry in a town that has been void of one for so many years. When pressed for what made them decide to do it, Steve replies, “Why isn’t there a brewery in The Dalles? Just like many Dalles residents, we felt strongly that the city could support their own craft brewery and pub. We certainly weren’t the first attempt, but we were not discouraged by the failure of our predecessors. We knew that there would be challenges to overcome, but were very inspired by the support and cooperation that we received from the city officials as well as the Gorge regional breweries.”

Deciding on the name of a brewery when there are over 4,000 in the United States alone can be a challenging process. Steven and Laurie decided to choose a name that has both local and family significance. The Freebridge crossing wagon trail has some historical ties to the area. Back in 1846 the Oregon Tail forded the Deschutes River that allowed travelers on the trail to avoid having to raft on the dangerous Columbia River. Then in 1855 a toll bridge was constructed over this low-lying area in the Deschutes. After either a heavy windstorm or by human means the Freebridge was destroyed in 1914. This area also happens to be in part of Laurie’s family property. Today a monument sits on this part of the trail on Fifteen Mile Road, one mile south of the Fairbanks School House.

Prior to opening Freebridge Brewing, Steve relocated to Oregon in 1991 from Michigan and until recently had been a fly fishing guide on the Deschutes River for the last 20 years. This time-spent fly-fishing also has a connection to the brewery’s name, as Freebridge is an area steelhead run. Steve’s wife Laurie is a native of the area. She is the fourth of a five-generation farmer/rancher family on Fifteen Mile Creek in The Dalles.

For the brewing portion of the operation the couple brought in an experienced brewer from the Gorge that also happens to live in The Dalles. Mike Boler arrives at Freebridge with over 25 years in the brewing industry. Through his career Mike has a resume that includes stints at Wyeast Labs, Full Sail, and most recently Everybody’s Brewing. Now he’ll be able to create beers for his hometown residents to enjoy.

The brewhouse that Mike is working on is a brand new 10 barrel system. At the grand opening it was mentioned that the brewery would brew more traditional styles of beers. There we sampled the Freebridge American Pale Ale, Harvester IPA, and Mule Skinner Stout. “Over the coming weeks will be an Irish Red Ale, Munich Helles Lager, and a traditional Bock Beer,” states Steve. 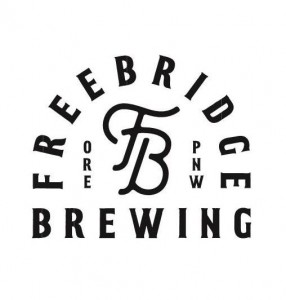 To get its beers out of its own brewery and taproom Freebridge fully intends to distribute off premise. Steve elaborates, “We will most likely self-distribute locally to start, but have been talking with regional craft distributers who are very interested in our beers. Getting into an agreement with a craft distributer is a commitment that will cause certain rapid growth, which will require immediate expansion of our cellar. We are currently discussing such expansion.”

When it comes to packaging its beers the brewery is interested in either bottling or canning. “Purchasing a canning or bottling line is cost prohibitive, we are considering using a mobile bottling/canning contractor in the interim. The financial commitment to small package is quite significant. We will most likely begin with a 500ml or 22oz bottling program to enter the market, but ultimately we would prefer 12oz aluminum cans.”

For those of us in Portland that want to try the beers from Freebridge traveling to the Gorge will be the best option for the time being. “Garnering a tap handle in the Portland market, quite honestly, takes an act of congress,” states Steve. “There are so many great metro breweries vying for a handle in Portland pubs that we feel like we have more opportunities in convenience stores and gas stations with small packaging. This is where a craft distributor will help get Freebridge Brewing into such a competitive marketplace.”

Freebridge Brewing is open Tuesday thru Sunday from Noon to 9:00pm through the end of winter. Its hours will increase to a full seven days per week beginning in spring.