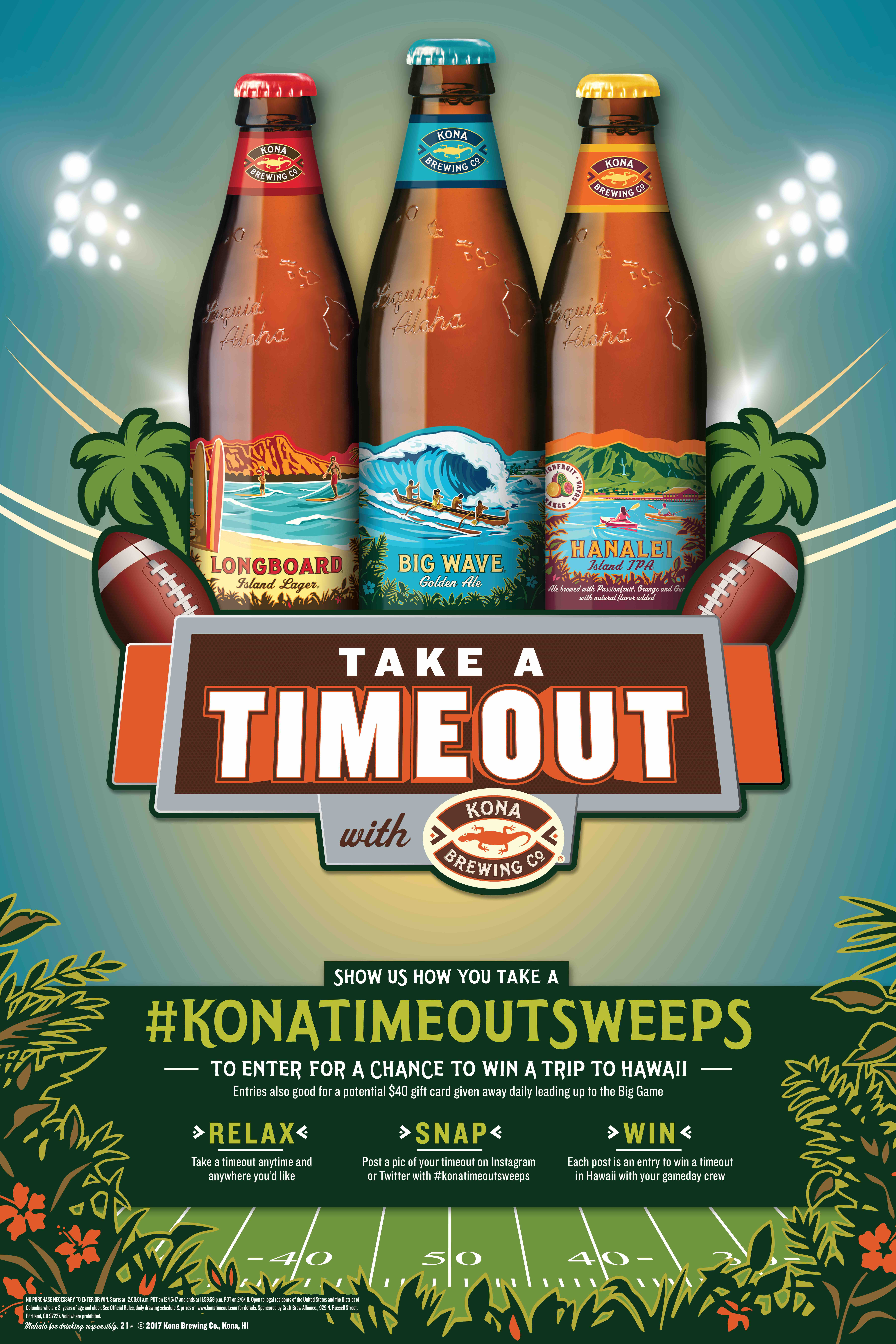 KAILUA-KONA, HI (January 5, 2018) – Today, Kona Brewing Company launches their Take a Timeout with Kona sweepstakes campaign across the brand’s social platforms and at retail stores, nationwide. The campaign is launching in January, which is one of the most stressful months for football fans – as they watch their favorite team ascend through the ranks or fumble in the end zone. The Take a Timeout with Kona campaign is designed to motivate fans to hit pause on their game day anxiety and experience a refreshingly un-stressful cold Kona beer. Participants who share that moment can enter to win an exclusive Hawaii experience with a trip to the Aloha state.

To participate, Kona fans post a photo showing how they take a timeout with their favorite Kona beer on Twitter or Instagram using the hashtag #KonaTimeoutSweeps. More details can be found online at www.Konabrewingco.com/KonaTimeout.

“Here at Kona Brewing Company, we realize that timeouts, in life or on the field, are just as important as the game,” said Widaliz Quinones, Brand Manager at Kona Brewing Co. “We wanted to create a fun way for fans to share how they take a break, recharge and hopefully inspire others to do the same.  So, while the players use their timeouts to prep for the next play, we want to remind folks that the best timeouts happen with a cold Kona.”

Leading up to the big game in February, Kona Brewing Company will be utilizing Twitter to communicate to fans their favorite timeout tips. To learn more about Kona Brewing Company or the Take a Timeout with Kona campaign along with official rules and regulations, visit konabrewingco.com/konatimeout. Also, be sure to follow @KonaBrewingCo on Twitter for the latest news and updates.

About Kona Brewing Co.
Kona Brewing Company was started in Kailua-Kona on the Island of Hawaii in the spring of 1994 by father and son team Cameron Healy and Spoon Khalsa, who had a dream to create fresh, local island brews made with spirit, passion and quality. Today, Kona is Hawaii’s largest and favorite craft brewery, known for top-selling flagship beers Longboard Island Lager and Big Wave Golden Ale and award-winning innovative small-batch beers available across the Islands. The Hawaii born and Hawaii-based craft brewery prides itself on brewing the freshest beer of exceptional quality closest

to market. This helps to minimize its carbon footprint by reducing shipping of raw materials, finished beer and packaging materials. Kona Brewing Co. has become one of the top craft beer brands in the world, while remaining steadfastly committed to its home market through a strong focus on innovation, sustainability and community outreach. For more information call 808-334-BREW (2739) or visit www.KonaBrewingCo.com. Talk with us via Facebook, Instagram, and Twitter: @KonaBrewingCo