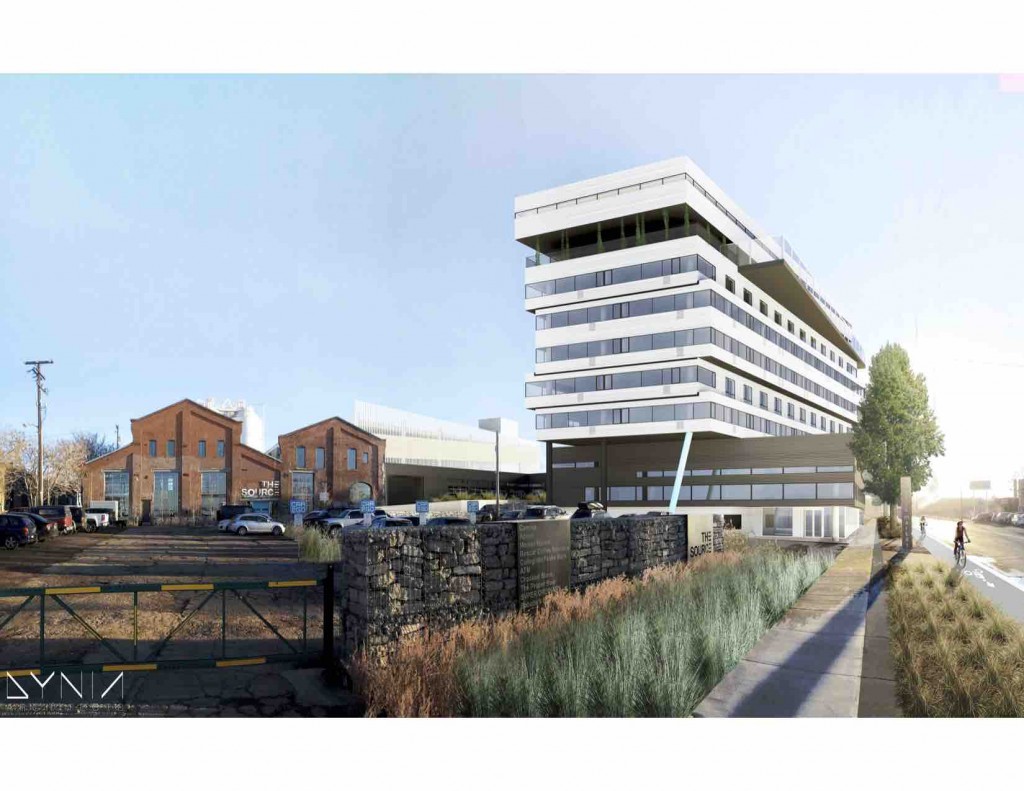 Ft. Collins, Colo., July 21, 2015 – New Belgium Brewing is about to let the creative juices flow through a new 10-barrel pilot brewery at The Source Hotel in Denver’s River North District (RiNo). New Belgium will brew on the ground floor of the Source Hotel, with barrel aging on the 8th floor in a rooftop lounge, dubbed “The Woods”, a collaboration between New Belgium and The Source Hotel. “The Woods” will serve New Belgium beers paired with small plates and will include a snack counter and bar, sit-down dining and beer garden. The 8th floor will also include a pool and roof deck with mountain and downtown views.

New Belgium beers originating from the 2,000 square foot brewery will go to establishments in The Source Hotel and expanded market hall. The fifty oak barrels for on-site aging will help expand New Belgium’s sour beer offerings, which the brewery has been producing since 1998. That’s when brewmaster, Peter Bouckaert, first introduced aging beer in wood barrels and blending to New Belgium. The brewery’s current cellar in Ft. Collins – also known as the foeder forest – now has 64 French Oak foeders, or barrels, making it one of the most comprehensive wood beer programs in the country.

“After 25 years in Ft. Collins, we’re really excited to get more deeply involved in Colorado’s cultural and political capital,” said Jenn Vervier, director of strategy and sustainability at New Belgium. “We’ve long considered creating a Denver location to bring the New Belgium experience to more of our Colorado fans and to the millions of travelers who visit Denver. RiNo is already a vivid scene with a rich art and craft beer culture, and will soon have great access for bikers and walkers. This small batch brewery will allow us to collaborate with The Woods’ chef and mixologists to create innovative beers, drinks, and pairings you can’t get anywhere else. The Source Hotel and the Zeppelin Development team are the perfect fit.”

Zeppelin Development, the Denver-based boutique development company behind The Source Hotel and expanded market hall will work with the group behind The St. Julien Hotel in Boulder, Colo. to operate The Source Hotel. Construction is set to begin this summer, with an anticipated opening in the first quarter 2017.

To learn more about New Belgium Brewing, check out NewBelgium.com and for more on The Source visit TheSourceDenver.com.

About Zeppelin Development
Zeppelin Development is recognized for over forty years of work on innovative mixed-use projects in Denver’s urban core neighborhoods. Fundamental to the Zeppelins’ success is identifying underused properties in primarily former-industrial areas. This strategy began in the mid-1970s with catalytic projects in Lower Downtown, continued in the 80s and 90s with early-stage redevelopment of the Golden Triangle neighborhood and is currently driving the development of Denver’s River North (RiNo) district. The father and son team of Mickey and Kyle Zeppelin are committed to promoting social change through intelligently designed projects that address unmet needs in the market and provide a catalyst to surrounding neighborhoods. As Denver natives, the Zeppelins and their team of collaborative partners have received recognition and multiple awards for TAXI, the repurposed 20-acre former Yellow Cab terminal and The Source, a new-generation urban market in RiNo. Current projects under development include additional new-economy workspace and the Freight Residences, a high-density family housing building at TAXI for underserved demographics not currently addressed by the multi-family rental boom, such as urban families with young children.

About The Source
The Source, a 25,000-square-foot culinary complex in RiNo, brings together a dozen carefully selected businesses in one location, including two restaurants, a bakery, coffee roaster, sour ale taproom, bank, whole-animal butcher, cocktail bar, florist, gallery, cheese shop, and produce vendor. Zeppelin Development drew on new formats for urban markets springing up throughout the country that combine a curated selection of purveyors with a venue for people to meet. As an outlet for some of Denver’s best artisans to share their craft, The Source inspires a community-oriented philosophy and is known as a gathering place for the surrounding RiNo neighbors, diners and shoppers from the metro area, and guests traveling from around the country.
Website: TheSourceDenver.com; Phone: 720.443.1135; Email: info@thesourcedenver.com;
Facebook: Facebook.com/TheSourceDenver; Instagram: @thesourcedenver;
Twitter: @TheSourceDenver

About The Source Hotel Company
The team behind the Source Hotel Company is renowned for developing, managing, and providing outstanding guest experiences at the St. Julien Hotel and Spa (Boulder, CO), arguably one of the best hotels in the West. With the same commitment, the Source Hotel team will welcome guests at this refreshingly uncommon hotel with a blend of style and exemplary service that will complement the spirit of its surroundings as well as its environmental sensibilities.