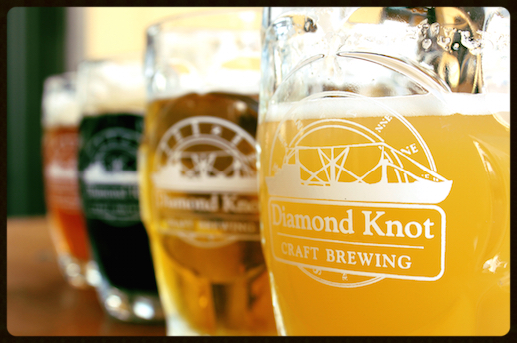 Diamond Knot Craft Brewing from Mukilteo, Washington has just announced a hefty release schedule of four new seasonal beers just in time for the fast approaching summer. Be on the lookout for these four new beers at any of the Diamond Knot Brewpubs in Mukilteo and Mountlake Terrace.

Throughout the summer look for Diamond Knot beers at Safeco Field along with the upcoming Washington Brewers Festival from June 19-21 at Marymoor Park in Redmond, WA.

Here’s a rundown of the four new seasonals.

Rose Knot Red Ale
Our brewers spent the winter perfecting this red ale. It’s a malt-forward beer using about 80% ESB malts as the base and Summit hops for bittering. ESB malt imparts a sweet bready flavor, and the Summit hops give it a slight bitter grapefruit kick. It’s refreshing with a lot of character. Very easy drinking!

Belgian Pale Ale
A traditional style Belgian Pale fermented with hints of clove, banana and spice. A crisp dry finish and low ABV make this a great beer for summer.

Old Spike
This is a traditional English style ale dating back to the mid 1800’s. This beer fits somewhere between our barleywine and Brown Ale. Sweeter than the Industrial Ho!Ho! and not as hoppy. Conditioned for nearly half a year. It has hints of molasses, dark sugar and sweet plums. It goes perfect with the cobbler on our Spring menu.

Imperial Chocolate Vanilla Stout
Brewed special for the Washington Brewers Festival. We used 40 pounds of cocoa nibs in this one. Full bodied and full of flavor. Served on a creamer faucet.